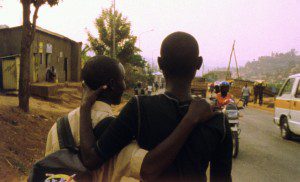 IF YOU are reading this paper while it’s still hot off the presses, then here’s a tip: get to the VanCity Theatre as fast as you can and catch Munyurangabo, a stirring independent film, made in Rwanda, that is playing at that theatre for a few days until November 30.

If you miss the film’s Vancouver premiere, don’t worry; the film, which has been making its way around the festival circuit for the past two and a half years, also came out on DVD several weeks ago. So, one way or another, you should be able to find a copy.

Why is this film so significant? Well, for one thing, it’s easily one of the best films made in Rwanda since the genocide that took place there 15 years ago. This is partly due to the fact that the film is grounded in the lives of actual Rwandans; it does not rely on European or North American characters in order to make the story more ‘accessible.’

But for Christian viewers, there is an extra hook, as it were. Munyurangabo was directed by Lee Isaac Chung, a Korean-American, while he was teaching a course in film and photography at a Youth With A Mission relief camp; and the two main characters are played by street kids that Chung met through YWAM’s soccer-outreach program.

Chung, who had never directed a feature-length film before, shot the film in 11 days with the help of his students — and it’s a remarkably masterful and assured bit of work.

The story concerns two boys — one Hutu, one Tutsi — who leave the city for the countryside while packing a machete, presumably to get some kind of revenge. Along the way, the Hutu boy is reunited with his family, but his parents remain suspicious of the Tutsi boy — and these tensions play out in deeply ironic ways that you don’t quite expect.

Just as important as the story, though, is the way Chung tells it. Just as he uses a mix of wide and close-up shots to balance the story’s intimate qualities with its broader, more national implications, so too he alternates between starkly realistic drama and techniques that break the fourth wall, most notably when a poet addresses the camera.

Chung himself is a Christian, and it is very much to his credit and that of YWAM that he was able to make a film that was not just a training exercise or an evangelistic tool, but a genuine and challenging work of art – and one that gives a voice to Rwandan people who have all too often been relegated to the background of other people’s stories.

December 1, 2009 Canadian box-office stats -- November 29
Recent Comments
0 | Leave a Comment
"Outstanding outline and identification of references and sources as well as background. Thank you so ..."
PaulDT Paul, Apostle of Christ: a scene ..."
"" So now, basically, the Magi are just a substitute for Santa Claus." <- Well... ..."
The 3 Wise Men — not ..."
"Young Chris Kydd is not looking forward to the father and son kayaking trip with ..."
Rafting Tara Billy Graham movies — the ’80s
"Apparently a billion or so people have already figured out the big plot twist to ..."
Buzz Dixon Watch: Trailers for Messiah and The ..."
Browse Our Archives
Follow Us!