Flashback: Eugene Levy, Down to Earth and American Pie. 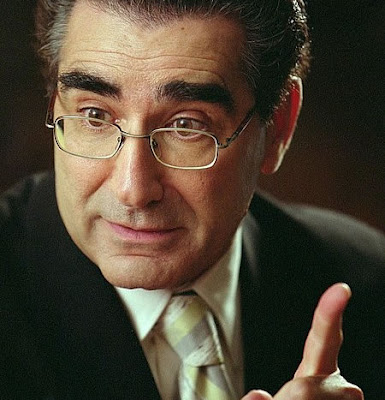 The release of American Reunion this weekend prompted me to look up a few of my articles on the earlier American Pie films (1999-2003). My favorite of these articles, by far, is actually not about this franchise, per se, but about another film directed by the brothers who made the first film in this series — and the reason I like this article is because I got to interview Eugene Levy, who plays Jim’s Dad in the American Pie movies and went on to play a bumbling angel in Down to Earth (2001). Here’s the article I wrote at the time for the Vancouver Courier:

From the brilliant sketch comedy of the SCTV series to his more recent work in feature films, Eugene Levy has made a career out of playing lovable losers. This weekend, he takes his familiar comic persona to new heights — as a bumbling angel in Down to Earth, a remake of the 1978 Warren Beatty vehicle Heaven Can Wait, which was itself a remake of the 1941 classic Here Comes Mr. Jordan. In all three films, a man is accidentally taken to heaven years before he is supposed to die. When the angels realize their mistake, they send him back to Earth and give him the body of a millionaire who died so recently that no one knows he’s dead — no one, that is, except for the wife and business partner who just drowned him.

In past versions of this story, the reincarnated fellow was a boxer or a football quarterback, but in the new version, which stars Chris Rock (who has come back from the dead before, in Kevin Smith’s Dogma), he’s a stand-up comic. Levy, who describes himself as “a huge Chris Rock fan,” says he signed on to do this film partly just so he could work with the charismatic comedian. “I think Bigger and Blacker, his HBO special, is one of the greatest hours of comedy,” says Levy. “It’s really, really hysterical. Chris is very funny, but off-camera, he’s kind of quiet, unassuming, and just unbelievably professional. It certainly wasn’t like you were on the set with a stand-up comic. It was like just being on the set with one of the other actors. That’s the vibe that he gives off.”

Down to Earth is directed by the multi-talented brothers Chris and Paul Weitz, who recently co-starred in the stalker comedy Chuck & Buck and, before that, co-wrote the animated film Antz. Levy first met the Weitz brothers a couple of years ago when they offered him a supporting role as a flustered parent in the raunchy teen sex comedy American Pie, which Chris produced and Paul directed. Levy had some qualms about that role, which he says was “too crass” at first, but the Weitzes allowed him to fix the character to make him more sympathetic.

After that, Levy says he developed a lot of respect for the Weitz brothers, and he was eager to work in their next film, no matter how small the role — and it’s a decidedly tamer affair. Chris Rock has reportedly said that he made this film so he could take his grandmother to at least one of his movies, but Levy thinks the film, with its cheerfully subversive take on racial politics, will appeal to a younger audience, too. “Heaven Can Wait is one of my favorite films — I think it’s a classic film,” says Levy, “and when I heard about the facelift that Chris Rock and his team of writers had put on it, I thought it was a fabulous version of this story, that would really kind of kick in with this generation.”

Levy’s role in Down to Earth did not require much improvisation, though he does take credit for one of the film’s funnier lines, concerning Sinatra and the respect he commands even from the chief angel, who is played by Chazz Palminteri. In addition to developing his characters in rehearsal, Levy sometimes takes an active role in writing original movie scripts, and this month, he and Christopher Guest were nominated by the Writers Guild of America for their work on Best in Show, the hilarious dog-show mockumentary that was shot in Vancouver. The film also received a Golden Globe nomination, and it appeared on a number of top ten lists, and Levy and Guest, who also collaborated on Waiting for Guffman, are already talking about getting together later this spring to work on another script.

“When we start these things, we call them ‘little films,'” says Levy. “They’re relatively small-budget, the studio leaves us alone, and you try and come up with a movie that’s funny. All we want to do is put a movie together where you watch it in the theatre and you hear more laughs than you ever thought you’d hear in a theatre. That’s kind of the goal. So it brings new meaning to ‘icing on the cake.’ It boggles the mind, how strongly people have reacted to the movie. It’s the kind of recognition we absolutely don’t anticipate.”

Over the phone and out of character, Levy sounds like a straightforward guy, and not that much like his comic persona. Asked if he would ever pursue more dramatic roles, he cites an ultra-obscure film he made a few years ago called Silver Man (which is not to be confused with Saving Silverman, the current comedy starring Levy’s American Pie co-star Jason Biggs), in which he played a pious Jew who gets caught up in the drug trade. “There was something kind of funny about that,” he concedes, “but I got a chance to smack some people around, and you know what? It was actually kind of fun. It was okay, and I didn’t embarrass myself. These will come up every now and then, but comedy’s my thing. I’ve been doing it all my life, and I get the most fun out of doing it.”

Looking at my article now, over a decade later, I’m surprised to see how briefly I touched on the American Pie part of the interview, since I have always loved what Levy brought to that film and I was quite happy to have a chance to talk to him about that. Here, then, for the first time ever, is the full quote from that part of the interview:

“Well, again, this is why I had a great time working with Paul and Chris Weitz. At the beginning, I wasn’t tickled with the way the character was, as written. The character of the father, when they approached me about doing it, I said to them, ‘I can’t commit to this, we have to talk about the character, because I don’t like the character the way he’s written. I think the character is a little too crass. I’d like to make this guy– I’d like to have him mean well, I want him to be a real kind of do-gooder, I want him to care about helping his son, I don’t want him to fall into the kind of sexual, sophomoric humour that everybody else is into. I want him to really care about what he’s doing with his son, and care about how his son ends up, and that kind of thing.’ And they were great. They allowed me to change the character. We went in, we improvised all the scenes in rehearsal that I was in, we changed a lot of it, and I think it really helped.”

April 9, 2012 Robotic hands, air to breathe, and Titanic.
Recent Comments
1 Comment | Leave a Comment
"Outstanding outline and identification of references and sources as well as background. Thank you so ..."
PaulDT Paul, Apostle of Christ: a scene ..."
"" So now, basically, the Magi are just a substitute for Santa Claus." <- Well... ..."
The 3 Wise Men — not ..."
"Young Chris Kydd is not looking forward to the father and son kayaking trip with ..."
Rafting Tara Billy Graham movies — the ’80s
"Apparently a billion or so people have already figured out the big plot twist to ..."
Buzz Dixon Watch: Trailers for Messiah and The ..."
Browse Our Archives
Follow Us!