For independent, LGBTQIA+ businesses, Pride Weekend is basically Black Friday. The shop I manage was slammed for three days, and while a handful of customers were… well, handfuls, it was for the most part an extremely hectic but enjoyable few days of retail, both financially and emotionally.

And I only had to deal with like three entitled straight people, so that was a plus.

One in particular stuck in my craw — this guy who’s been around the scene for awhile. I don’t know much of his backstory, other than he was originally active in the greater Houston kink community. And I don’t know what inspired him to start hanging out at a gay leather bar, but he eventually got involved in some organizations and worked his way into leadership positions. I get the vibe that he views himself as an authority figure, even if the rest of us aren’t quite sure what to make of him.

I’ve never had any outwardly bad interactions with him, although he’s said some things to me in the past that left suspicious tastes in my mouth. He once approached me and was like, “You know, I’ve really been wanting to find more opportunities to be of service. Let me know if the Misfits ever need help with fundraising or anything.” Which was nice of him to offer, except he was also about to run for a title, so the whole thing felt more like him looking to pad his resumé than genuinely be of assistance.

He did win the title, by the way, and he never asked me about volunteer opportunities again. Oh, wait. Except for the time he was organizing a big pansexual (meaning open to everyone regardless of sexual orientation) community dinner thing, and he invited the Misfits… to serve the food.

The request did not go over well with the rest of the club: “So what you’re saying is that the straight leather dude wants the gay leather dudes to cater subserviently to him and his friends. Hard pass, please.” Needless to say, we respectfully declined.

Anyway, it was early Saturday afternoon when he came into the store, which was mobbed, and he browsed for awhile before waving me over.

“Oh! Well, we opened back in late April, and we’ve been chugging along ever since.”

“That’s great!” He said, before dropping his voice and leading me away from the checkout counter, where my co-workers were busy wrangling the growing line of customers. “But listen. You need to advertise that you carry leather.”

He gestured at the racks of seductively-cut undergarments near the front of the store. “You should have all of your leather right up there, where it’s visible.”

I’m not sure why he chose that moment to start laying constructive criticism on me, but I did my best to assure him that our (already considerable tbh) selection of leather would continue to grow, and that we would rearrange the shop as necessary to accommodate it.

“Oh, good,” he said. “Because all of this other stuff you’ve got, it might sell to the people who are going to come in today…” He cast a disparaging eye at the spectrum of shoppers around him. “But leather is what’s going to keep you in business.”

“Oh, definitely,” he replied. “Heck, I’m probably going to come back and buy a shirt! See? You need to focus on what your customers want.”

Providentially, another customer needed help with something, so I tossed out a final, “I’ll certainly keep that in mind,” and removed myself from the conversation. But now that there’s been time to reflect, I have some thoughts.

Leather is an investment.

If I get the absolute leather basics — say, a bar vest and a pair of stompy boots — I’ll be spending around $300. If I go all out on a formal outfit — shirt, pants, gloves, Sam Browne belt, garrison cap — I’m looking at a minimum cost of $600. Add that together and throw in some wristbands and a harness, and I’ve crept well over $1000 in expenses. And once I have all of those core pieces, it’ll be awhile before I have to replace any of them. If I take good care of them, I may never have to.

So yeah, if we carried nothing but leather, we’d be raking in money hand over fist for maybe a month or so, right up until everyone who needed leather had all their leather. At which point we’d get to sit around and clock-watch until a collection agency locked us out of the building.

All of the brands we do carry are leather-adjacent.

There are a number of companies — Breedwell, Cellblock 13, Locker Gear, and Nasty Pig, to name a few — that market specifically to subcultures within the the greater Sacred Alphabet, and these brands are generally unavailable outside of specialty stores. But more importantly, clothes from these brands act as visual expressions of queer identity.

If I’m out and about, and I see someone wearing a Chris Lopez T-shirt, I immediately know that I’m not the only Uranian in the immediate environment. There is both relief and confidence to be drawn from that. And there is a long, long history of gay men using articles of clothing and accessories to subtly make themselves known to one another. Heterosexuals may not have need for such code or symbology, but that doesn’t discount how vital it was and still is for those of us whose lives are regularly legislated.

Although I did once have a straight lineworker who’d been repairing wiring along our street randomly wander in and buy a Slut Monkey baseball cap, because it was, and I quote, “bad-ass.”

Please do not hit on that guy, brethren. He knows not what he’s broadcasting.

But since we’re talking about buying things…

“Probably going to come back” doesn’t pay the rent, my good breeder.

I shouldn’t let this get to me as much as I already have, but there was a lot of privilege showing in his statement. I know he didn’t mean it maliciously, but it honestly came across as, “Run this place the way I expect you to, and perhaps I’ll deign to patronize it.”

Whether it’s business, or the right to get married, or the freedom to have sex in the privacy of my own home without the cops kicking open the door and dragging me away, I am really, really tired of waiting patiently for straight people to decide whether or not I’m allowed to survive, much less prosper.

For what it’s worth, I will say that this guy is far from the worst I’ve ever encountered. A lot of the straight people who come in either get offended when faced with sexually-charged merchandise geared towards men who love men, or they demand to know why we’re being discriminatory by not stocking anything just for them. Like the bevy of straight girls who posed for selfies in front of the Progress Pride Flag painted on the fence next to the shop, then came inside and complained that our inventory made them feel excluded.

It’s not a word I ever thought I’d use in a customer service context, but telling them, “There’s an Adam & Eve outlet a few blocks away that’s much more heteronormative,” was weirdly empowering. Especially when they thanked me and left.

It’s the little victories that matter most to me.

Funny thing about this whole situation, though: Straight leather dude’s initial grievance was that he didn’t know we’d opened, because we hadn’t publicized it enough. Except we had: We’d advertise extensively on social media [side note: he’s not on Facebook], and we also relied heavily on word of mouth. And most of the movers and shakers in the local Leather klatsch have been shopping here since we established ourselves.

So if he wasn’t aware of our existence, it’s because nobody bothered to tell him. And that speaks queer volumes.

It means that — at least for now — our community still belongs to us. 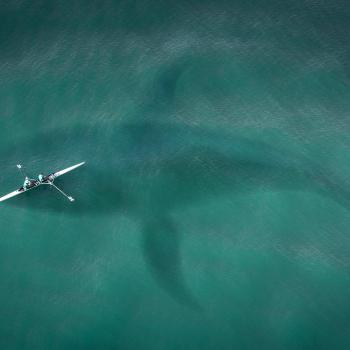 Pagan
All I Really Need to Know I Learned...
Fivefold Law