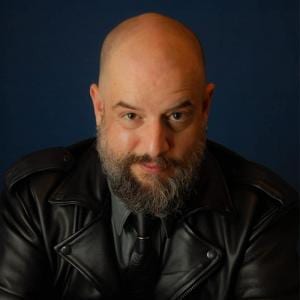 So. Your name is Thumper.

I once got roped into co-emceeing a charity beauty pageant, and during the speech portion of the evening, one of the contestants was asked, “If your emcee were to get a tattoo of a Disney character, who would it be, and why?” (I found out later that one of the judges, feeling precocious, had written all of the pop questions about me.) The contestant responded, “It would be Thumper. I don’t know why. It just would be.”

I was backstage and not paying attention when this went down, and as I was walking back on, a friend of mine was like, “Well, hey there, Thumper.” And I was like, “Um, hey there, Scott,” and kept walking. By the end of the night, everyone was calling me Thumper, and it just stuck. I don’t love it, truth be told, but I’ve never particularly cared for my legal name, so it’s all good.

And your middle name is Marjorie?

That is a whole story unto itself, which you can read (and watch) here.

Did you really compete at International Mr. Leather?

Yes. Yes, I did, as part of the IML class of 2018. I placed 25th out of 71 candidates, and even though I didn’t make it to the final round, I definitely went into the competition with the witchiest-sounding title.

I first discovered Discordia in the pages of Margot Adler’s Drawing Down the Moon and was immediately intrigued, mainly because I’m a cradle Greek mythology geek, and Eris was my favorite Goddess when I was a kid. I tracked down a copy of the Principia Discordia and worked the word “fnord” into my vocabulary, and eventually, I started incorporating Discordian concepts into my Witchcraft. It all kind of went downhill from there.

What was your first experience with Chaos Magic?

So there I was, lying naked on a massage table, wearing LED glasses that pulsed rhythmic patterns of light into my eyes. Middle Eastern trance music played in the background as I concentrated on charging a psychic sigil, while my buddy Chester performed energy work around me and led me through controlled breathing exercises.

Yeah. But I’ve been sigiling away ever after.

Okay, seriously: How did you end up writing for Patheos?

It is 100% Mortellus‘ fault. She introduced me to Jason Mankey and came up with the name of the blog and created a logo for me, and she is officially the Discordian Minister of Death, and I am legally obligated to swear allegiance and give her my firstborn.

What are your pronouns?

They/them. I’m on the non-binary spectrum, somewhere between agender and genderfluid. Agenderflux is the term that most agrees with me, but I usually just call myself a demiguy.

How do you reconcile your sexual orientation and gender identity with your Gardnerian practice?

There’s really nothing to reconcile. I crunched some numbers, and out of the 900 or so Gardnerian initiates I either know personally or have some kind of connection to, about 200 of us are LGBTQ+. Since roughly a quarter of the active Gardnerian population is happily queer, it’s time to accept that homophobia and transphobia are emphatically not inherent to the tradition, regardless of what anyone outside the trad says about it. (But you don’t have to take my word for it: Check out Inclusive Wicca by Yvonne Arburrow and Outside the Charmed Circle by Misha Magdalene for more information.)

Do you have a boyfriend?

I do! His name is Ben. He is great and has awesome hair.

Want to grab a beer sometime?

It’s cool! I promise! It doesn’t bother me at all if you drink around me. I just choose not to drink myself.

The tl;dr version is this: Eight years ago, I hit a point where I could no longer pretend that all of the problems in my life weren’t directly related to how much I was drinking. So I did something about it — namely, I went to Alcoholics Anonymous. I know a lot of people out there take issue with 12-Step Recovery for a variety of reasons, but it worked for me, so I stick with it.

I am developing a mild obsession with you. May I harmlessly stalk you online?

Sure. You can follow me on Facebook, Instagram, and Twitter. I’ve got some other social media accounts that I haven’t done anything with, but I will let you know as soon as they’re interesting. (I also have a Zazzle shop, in case anyone’s in the market for a gimcrack or two.)

Can you name-drop any politicians?

Indeed he is. Anything else you’d like to know?

If you were forced to choose between Fritos and sesame sticks, which salty snack would you give up forever?

This interview is over.