Why did God Confront Adam First after the Fall?

Someone once posed this question to me after speculating that, although both men and women are sinners, men may be deeply responsible for human sin in a way that women are not. The exegetical influence on his thinking comes from his reading of the order in Genesis 1-3: God commands Adam directly not to eat of the tree of life, then confronts Adam first after both he and Eve sin. Since Adam, not Eve, is the direct subject of God’s command “you shall not eat” (Gen.2.17) and first in the line of questioning when that command is broken, we might infer that men are somehow more accountable for sin, even if men and women are both culpable.

Order seems to have symbolic significance in the creation narrative, but it’s worth rethinking exactly what that order signifies. Does being first in the line of questioning connote some kind of “priority,” in terms of responsibility, or something else?

In fact, a hermeneutic of first=priority contradicts how order is actually portrayed in the creation story arc, which gives priority and privilege to humankind as God’s final, crowning creative act. The right hermeneutic here is important, as assumptions that order indicates priority have been used to justify a complementarian exegesis that may not otherwise be implied, or supported, by the text.

Order in Genesis: A Movement from Less to More

The most obvious reason for God confronting Adam first (rather than Adam and Eve together, or Eve first) is narrative parallelism, i.e., God does not create Adam and Eve together; he creates Adam first. Therefore, he approaches Adam first after the Fall. With God, man is always first, woman is always second. (Interestingly, with Satan, it’s a different story. He is literally out-of-order, initiating his attack against Eve, not Adam.) As a woman, I used to resent my place in this order – first in sin, second in creation – until I recognized that the creation story arc involves a movement from less to more; what comes next represents advancement. We start with the basics, with light, we eventually get to animals, and then finally humankind. Creation is a long crescendo that culminates in us. In my previous post I wrote about how God’s own characterization of his creation moves from “good” to finally “very good.” Being last in this narrative isn’t a bad place to be!

One might conclude that God confronted Adam first because he was more to blame, since God commanded him directly not to eat of the tree.  But if being “first” in the creation narrative doesn’t connote a sense of “more,” then maybe we shouldn’t assume that from the order of God’s questioning. God’s interrogation of Adam first, followed by Eve, reaffirms God’s established order of man then woman, which Satan subverted, without necessarily implying that Adam is somehow more responsible than Eve.

In his book Flame of Yahweh: Sexuality in the Old Testament, Richard M. Davidson provides several explanations as to why God confronts Adam first, including my point on narrative parallelism. He notes that the order of questioning may reflect God’s direct command to Adam not to eat; however, he doesn’t infer that this direct command to Adam, or the order of interrogation, indicates some deeper responsibility on Adam’s part. Davidson also gives an additional reason for why God didn’t approach Adam and Eve together, comparing their individual interrogation to a trial in which each party must be examined separately. As summarized here:

“God questions the man first for a number of reasons that are apparent in the text: (1) A primary reason no doubt is that the man was created first and the first one to have received the command not to eat from the fruit of the forbidden tree (2:17), and so, since he had been the one directly and personally warned, it was natural for him to be the one God would approach first….(5) The interrogation of vv. 9-13 proceeds in chiastic order from that in which the characters in the narrative are introduced in vv. 1-8, with God in the center of the structure (this is in overall harmony with the overarching chiastic structure of the entire chapter, and with another reversal of order in vv. 14-19. (6) In this legal trial investigation, God must examine the witnesses one by one to demonstrate their individual guilt; the man blames the woman, who then naturally is put on the witness stand for divine interrogation.” (66-67)

Notably, Davidson is adamant that God’s questioning of Adam first in no way implies that Adam was responsible for Eve, whom God calls separately to account; or, in a similar vein, that Adam is in a position of authority over Eve (65-67). This latter point is particularly important, as complementarians have interpreted order in Genesis, particularly Adam’s creation prior to Eve’s, as evidence that male “headship” and female submission (i.e., patriarchy) existed before the Fall and is part of God’s good plan for humanity.

Anglican theologian William G. Witt has challenged whether Adam was actually created first, noting that the word ha’adam in Hebrew doesn’t connote Adam, the man, but humankind; and that the linguistic transition to “male” doesn’t happen until Eve is also created, in Gen. 2:23. In a blog post entitled “Women in the Holy Orders,” he writes:

“Unlike modern English, Hebrew makes a distinction between the word ha’adam (properly translated “the human being” or “humanity”) and the word translated “male human being.” Gen. 1:28 describes the creation of humanity or humankind (ha’adam) in the image of God as male and female. Gen. 2:4 describes (with a deliberate pun) the creation of a single human being (ha’adam)….The Hebrew word for “male human being” does not appear until Gen. 2:23, when sexuality first enters the picture as the Hebrew word for “man” (male human being) is introduced rather than the generic ha’adam as both man and woman are identified as such for the first time: “ ‘This at last is bone of my bones and flesh of my flesh; she call be called Woman (‘issa) because she was taken out of Man (‘is)’.”

Witt goes on to essentially say that it’s impossible for a man to have been created first, because male sexuality is only manifest in relation to its complement, which is female sexuality: “Men exist as men and women as women only as companions of one another. Neither can be complete without the other.”

Interestingly, if we follow the interpretation that Adam wasn’t created first and doesn’t appear properly until Gen. 2:23, then God’s command not to eat from the tree, in Gen 2:17, was given to “the human being” – not to Adam directly. While this reading cancels out the narrative parallelism of created first/directed first/questioned first, Davidson’s explanation of chiastic structure and narrative harmony would still suffice to explain the order of interrogation.

It seems compelling that a reading of Genesis in which Adam is created first, and engaged by God first, doesn’t necessarily reflect the patriarchal order that complementarians infer. We are so accustomed to associating priority and prominence to what is first, but we must be careful not to make this hermeneutical error in Genesis – which privileges what comes last – or our exegesis may veer off course. As Witt demonstrates, we must be careful in assigning order at all, in terms of the creation of humankind. As I hope to examine in a future post, man and woman can only be defined as such in relationship to one another. That is, our sexual identities as men and women can only be realized together and not in isolation. Similarly, the persons of the triune God, in whose image we are made (Gen. 1:26), are co-eternal and although distinct, cannot be accurately perceived apart from their relational context. 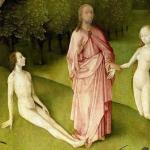 September 22, 2022 The Trinity and Gender Relationships
Recent Comments
0 | Leave a Comment
Browse Our Archives
Related posts from Flesh of My Flesh 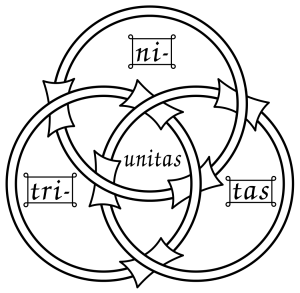 Evangelical
The Trinity and Gender Relationships
Flesh of My Flesh 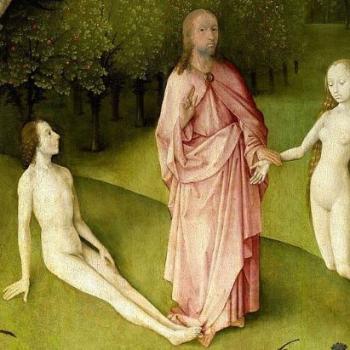