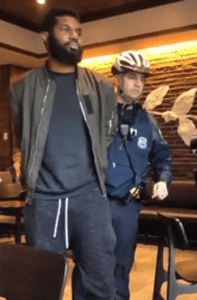 By now you’ve probably heard about the two black men who were arrested while waiting for a business associate at a Philadelphia area Starbucks and the ensuing protests.

The Qur’an tells us, “You who believe, uphold justice and bear witness to God, even if it is against yourselves, your parents, or your close relatives. Whether the person is rich or poor, God can best take care of both. Refrain from following your own desire, so that you can act justly- if you distort or neglect justice, God is fully aware of what you do.”  (4:135)

So I bear witness: It’s clear, those men were treated with prejudice and injustice. It’s clear that racism, systemic, implicit, corporate and individual, is alive and thriving in America today. And it’s clear that we — and by we I mean my fellow members of the white race — we have a moral obligation to do everything in our power to stamp out racism and relinquish our privilege.

We can’t all go to Philly to protest at that particular Starbucks, but was can take a stand. Enough is enough. Racial profiling and the criminalization of black people simply for leading a normal life has got to end. No one should have the police called on them because they are waiting for a friend at a coffee shop, trying to get into their own house, or killing time till they can pick up their kids from school.

A lot of people are calling for a boycott of Starbucks stores across the nation. If challenging racism, subtle and blatant, implicit and systemic, on an individual or group or nationwide level means boycotting a coffee chain, by all means let’s do it!

But the Starbucks chain is hardly the only offender.  There are far more offensive retail chains to avoid: Dillards has been sued by over 80 African Americans for discrimination.  Macy’s has been sued by 24 shoppers in New York alone. Applebees, IHOP, Wal-Mart, Abercrombie and Fitch, Denny’s, Cracker Barrel, and General Electric have all gotten in hot water for the way they have treated shoppers and employees. To be honest, we need to be boycotting nearly every major chain in America.

Indeed, Starbucks may not be the best target for our ire and our boycotts.

Why Wouldn’t You Boycott Starbucks?

To be fair, we need to bear witness not only that racism is pervasive and persistent in our country, but we also need to bear witness that Starbucks’ has been a leader in trying to eradicate racism and it’s effects. Its response to the incident has been serious and consistent. CEO, Kevin Johnson, immediately extended a fervent apology to the men and identified what happened to them as racial profiling. He could have made  a pro forma apology as we often see in cases like this. He could have waffled around and said it was caused by a misunderstanding. But he didn’t. He called it what it was, and promised to do better.

Johnson also said the incident doesn’t represent Starbucks’ values, and that they will work harder to prevent these types of incidents through revised standards and better training. While they didn’t immediately fire the manager, taking a few days to investigate what happened,  they did remove her from the store. It was revealed yesterday that she is no longer working for the company. Today Starbucks took action on their promise to improve standards, and announced they will close thousands of stores for a half day of sensitivity training in late May. It seems like Starbucks is actually doing what they said they would.

Yes, the whole response feels a bit like frantic image management, and the cynic in me fears that it’s nothing more than damage control, but I think we need to give them the benefit of the doubt.  Starbucks has a history of engaging with racism in our society in real and meaningful ways.

In fact, Executive Chairman Howard Shultz was awarded a National Equal Justice Award by the NAACP’s Legal Defense Fund just last November for his commitment to racial equality. And unlike many corporate heads who aim for studious neutrality, Shultz proclaimed, “In 2017, expressions of white supremacy and other vile acts of hatred should not just be met with condemnation and outrage. This critical moment in our nation requires a renewed commitment to activism in support of the great American ideal, set forth in our Declaration of Independence, that ‘all men are created equal….The power to transform America rests with us, as leaders and citizens.”

Starbucks has made significant efforts to address racial inequality in their stores. Their Youth Opportunity program seeks to empower at risk youth by providing employment options. They offer by health benefits to part time employees and college tuition to student workers. They have made a commitment to use women and minority own contractors when building new stores. And their board boasts more diversity than many, with some 20% being minorities of religion or race. And while their Race Together campaign in 2015 which was designed to spark conversations around race was highly criticized, it was a bold move at a time when racism was flaring in the US.

Maybe a better response for those of us who are working to end racist attitudes and actions is to use the incident as a launch point to talk to family, neighbors and friends who don’t consider themselves racist or biased, but still fall prey to racist stereotypes and implicit bias.  I’m not talking about confronting white supremacists or neo-nazis, I mean having a chat with the folks who aren’t quite sure that systemic racism is real, or who think that black complaints about profiling are exaggerated and most often a product of black people looking for discrimination, and finding it even if it isn’t really there.

In particular, there are many folks who don’t see the racism inherent what happened at the Philadelphia Starbucks.  There are many who make excuses for the store manager. Or who feel that people of color should just put up with these sorts of events. Many others are unaware of the repeated pattern of racial profiling that is going on in retail outlets across America, or even justify it because  of myths that “black people are more violent than whites.”

These are the people we need to talk to. I recently wrote about the insidious nature of systemic racism and how it’s difficult to challenge the system. That column demonstrates step by step how a system creates racist effects without anyone being actively racist in their behavior or attitudes and can be used as a launching point to discuss systemic racism in America. This current incident in Starbucks provides us an opportunity to address implicit bias and how negative assumptions about people of color plays out on a personal level, especially with those who may not see how this incident was racial in nature.

How Do You Know it was Really about Race?

There are clear indications that this was about more than loitering, as was claimed.

There are lots of resources for continuing the discussion. Try the NAACP or the ACLU for more on these issues.

May 10, 2018 American Muslims Uneasy Relationship with the LGBT Community
Recent Comments
0 | Leave a Comment
Browse Our Archives
get the latest from
Muslim
Sign up for our newsletter
POPULAR AT PATHEOS Muslim
1

Islam Means Submission-Submission in the Qur'an...
Ask A (Born Again) Muslim
Related posts from For the Love of God