Liberals and Fundamentalists Have it Wrong: Faith is Not About “Correct” Facts

Liberals and Fundamentalists Have it Wrong: Faith is Not About “Correct” Facts August 7, 2013 Frank Schaeffer

The reason so many liberal churches are empty or mostly populated with aging rationalists who seem to have a somewhat embarrassed attachment to religion, is that trying to reduce spiritual experience to something verifiable is a dead end. It’s a dead end for fundamentalists too. Fundamentalists wind up defending myths as historically true. That’s as futile as it is for the theological liberals that seek to demystify myths and render the life of the spirit tangible. 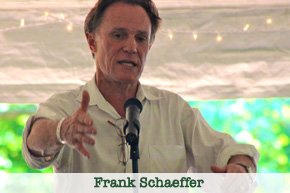 Join me at the Wild Goose Festival this week!

If fundamentalist churches seem to be run by paranoid fact-free hysterics liberals seem to approach spirituality as a lifeless rationalist project.

Fundamentalists and theological liberal do share something though: FEAR. They are afraid of being proved wrong and so spend a lot of time defending their theological points of view.

Fear comes from being afraid we’re not certain about the facts of faith or non-faith. Atheists and Christians all strive to be correct in our views. But what if the very struggle for certitude is a dead end?

The first thing Jesus said after he was raised from the dead was “Be not afraid.” So don’t be.

I’m not asking you to imitate my brand of hope-filled Christian uncertainty, but if the subject of Jesus still interests you please consider this: Faith is not about “getting right with God.”

Jesus used the Torah against Torah. Jesus used a higher morality of the kingdom of God within us against the law. Every passage in which we read of Jesus reading the Torah he is making his own independent interpretive decisions. For instance, Jesus consistently places love for neighbor above veneration of the law or even ideas of justice. And “neighbor,” as Jesus defined that word, is the outcast, the other, the loser, the victim, the hated, the enemy. The neighbor is the enemy we are to love, not in order to save us from God’s wrath but to save us from ourselves.

The philosopher René Girard points to a non-retributive understanding of Christ precisely because Girard rejects the retributive “god” followed by so many Roman Catholics and Protestants, not to mention Muslims and Jews. Girard developed the idea that human primates do what all primates do: imitate each other, and that this gives rise to violence. Because we imitate others we imitate their desires. Through this “mimetic desire” we come to want what others want and we kill to get it. That violence is a threat to the survival of the tribe.

What is needed if our faith is to live, is for us to re-mythologize our holly traditions and texts, not to try reduce them to the tidy categories of what is true and what’s not true as those terms are used for reading airline schedules. There’s another way of seeing things: Something can never have happened and still be true.

Put it this way we’re not talking about flying in planes here but about flying dreams. A Bible story can never have taken place in a historic sense but still is truer than what’s provable in a chemistry lab. It isn’t describing what happened once upon a time but what’s always happening. It’s telling us why we dream to fly not how airplanes work.

Before there were planes people had flying dreams. The dreams tell us something lasting and authentic about our desire to transcend a mortal earthbound existence. They tell us something more basic and eternal about being a human than anything an engineer at Boeing or Airbus Industries can explain.

The least interesting question about religion is to ask “Did this really happen?

The result of the gospel is the point, not what happened or didn’t. The scientific spirit, like the spirit of enterprise is a byproduct of the profound action of the gospel. The modern Western world has forgotten the revelation of the gospel in favor of its mere byproducts, reason and science. As Girard writes in Hidden Things, “I hold the truth is not an empty word, or a mere ‘effect’ as people say nowadays. I hold that everything capable of diverting us from madness and death, from now on, is inextricably linked with this truth.”

According to Girard, the Bible shows that violence does not come from God; rather, God sympathizes with victims. Seen this way, the incarnation incarnates God in the person of Jesus, in order to become himself a victim. God’s only earthly throne is a cross. His only “revenge” on his enemies is unconditional compassion and forgiveness.

This view is the opposite of satisfying the blood lust of an angry god modeled on the pagan deities and the theological theories of atonement. Rather, the Incarnation and Christ’s murder points to the futility of violence and to the path of salvation through all encompassing empathy. Christ, in Girard’s view, was not the ultimate sacrifice but a rebuke by God of sacrificing anyone for anything… including some concept of “truth.”

Rather than demanding some sort of justice, Christ sets the example of turning the other cheek. “Forgive them,” he asks for his killers.

The killing of God becomes the example of what all God’s children must be willing to suffer in order to bring peace on earth. It is in fact the root of all concepts of human rights as we understand them in the West. The humanism of the enlightenment borrowed from this ethic as do today’s so called New Atheists.

If you lose your life you will find it. If Jesus is God, then this God loves his enemies and friends alike. If he is not God, the enlightened ethic of non-retribution still guides the best of our civilization and we depart from it at our peril.

August 10, 2013 At Wild Goose We Cried
Recent Comments
0 | Leave a Comment
"Except that Rapture is not mentioned anywhere in the Bible, or in any other source ..."
Starsatyr Tim LaHaye is dead but his ..."
"Good article, but I believe a tad outdated now 4 years later. While the Moral ..."
Kirk Leavens An open letter to the Republican ..."
"Praying deconverted me. So yes, Christians, keep praying."
Captain Cassidy Evangelical and/or Post-Evangelical Christianity, “Progressive” or ..."
"ALL Christians voted for President Trump. On NOV 8 2016 the choice was do you ..."
Dry Loop The Case For Impeachment Grows
Browse Our Archives
get the latest from
News and Politics
Sign up for our newsletter
POPULAR AT PATHEOS News and Politics
1

Reincarnation & Plays
Imagine that you're in a play - and all the people in...
view all News and Politics blogs
What Are Your Thoughts?leave a comment
Copyright 2008-2021, Patheos. All rights reserved.
error: Content is protected !!