Just How Stupid and Dangerous are Billy Graham, the Tea Party/Evangelicals and the Political Leaders Like Benjamin Netanyahu Playing the “End Times” Game?

Just How Stupid and Dangerous are Billy Graham, the Tea Party/Evangelicals and the Political Leaders Like Benjamin Netanyahu Playing the “End Times” Game? October 26, 2013 Frank Schaeffer

Once in a while I read something that is so blindingly dumb I assume its a parody. But when you dip into the evangelical world of paranoia and end time fantasy that Billy Graham and most evangelicals live in, even the Onion couldn’t outdo the reality of what the broken brains of the religiously deluded churn out. Do they believe this crap?

I don’t know because it’s so mixed up with fundraising. I hope its just a scam. If this many people are really this stupid we’re in serious trouble. In the case of Billy Graham he seems to believe in his own science fiction, or maybe he’s just still afraid of dying — as he told Dad and me he was when we used to meet with him in the 1970s and 1980s back when I was an evangelical operative helping to poison the GOP. Maybe Billy hopes Jesus will pull him out of here to heaven before he dies. Who knows? The point is we’ll all still be stuck here after Billy dies and finds out he was wrong, or maybe just goes blank. Whatever. Meanwhile my grandchildren live here and so goofs threatening the US are threatening to me because I love my grandkids.

I’ve been out of the evangelical loop so long that when I read something like this article (excerpt below) I just can’t quite believe it. And by the way the article is surrounded by other offerings, adds for guns and survivalist equipment and the usual trappings of the Tea Party/evangelical derangement. What is routinely published and here as “serious” political/religious cometary from the right is an illustration of what I write in my new book And God Said, “Billy!“exploring the roots of American religious delusion, and offering another way to approach true spirituality. Only I couldn’t make this stuff up.

Here are some of the other titles next to this article that give it the full context– “Astonishing ‘Red Sea Crossing’ video – $4.95 today only! Robotic submarine cameras reveal ‘hundreds of Egyptian chariots strewn across the sea floor'”, “The End Of Obama” , “I Am a Christian, Sign the Pledge,” “The Real Reason for Martial Drills Taking Place All Across America”

“Obama’s Private Army–the real reason Obama wants to take away your guns,” and on and on it goes.  My new book And God Said, “Billy!” on the anatomy of the religious delusion that threatens us through the Tea Party and the (now far right bat-crazy) Graham marketing empire, simply can’t be as far fetched as the reality of the hollow shell that is the evangelical/Tea Party/gun-collecting “mind.” And remember these people now have their own political party — the GOP — and new heroes like Ted Cruz to lead them up to the moment Jesus snatches them all up to heaven, or to a celestial insane asylum more likely.

Here’s how some of this article goes:

Just as Noah did in ancient times, world-renowned evangelist Billy Graham is sounding the alarm that the Second Coming is “near” and signs of the end of the age are “converging now for the first time since Jesus made those predictions.”

“When you see up is down and right is wrong, when this is happening, we were told this: that these days would be as the days of Noah,” Bachmann said.

The remarks by Graham, Netanyahu and Bachmann come amid a steadily rising wave of public interest in the end times, [and] bestselling books such as “The Harbinger: The Ancient Mystery That Holds the Secret of America’s Future,” by Rabbi Jonathan Cahn, and “Four Blood Moons: Something is About to Change,” by Pastor John Hagee.

In September, a poll by the Ventura, Calif.-based Barna Group found 4 in 10 Americans – and 77 percent of evangelical Christians – believe the “world is now living in the biblical end times.”

Now, a new wave of end-times predictions for 2014 and 2015 involving blood moons on Jewish holy days and prophetically significant events on the Shemitah – the ancient biblical year of the Sabbath – are igniting even more interest in humanity’s ultimate fate… Jonathan Cahn’s “The Harbinger” reveals an astonishing prophetic mystery unfolding today

“I think we’re on the verge of a global awakening in interest in apocalyptic events,” said Paul McGuire, an internationally recognized prophecy expert who is a regular commentator on Fox News and CNN and appeared on two highly rated History Channel specials, including “7 Signs of the Apocalypse.”

“I see a fuse being lit here, between what Billy Graham, Michele Bachman and Benjamin Netanyahu said, and I think there is going to be an explosion of interest in the end times like nothing we’ve ever seen before,” McGuire said.

In an exclusive email interview with WND, Graham, 94, who is giving what may be his last message to the world as part of the My Hope America with Billy Graham evangelistic outreach in early November, said the world is “coming toward the end of the age.”

“There’s a great deal to say in the Bible about the signs we’re to watch for and when these signs all converge at one place we can be sure that we’re close to the end of the age,” Graham wrote. “And those signs, in my judgment, are converging now for the first time since Jesus made those predictions.”

In his new book, “The Reason for My Hope: Salvation,” the famed preacher who has delivered the gospel message to more people face-to-face than anyone in history wrote the great hope of the Christian faith rests in the promised return of Christ… The evangelistic outreach and book come as a number of major evangelists – Graham, his son Franklin Graham, Reinhard Bonnke, Greg Laurie, Luis Palau, Banning Liebscher and others – are turning their attention toward America in the hope of helping ignite what Graham calls an end-times “great spiritual awakening.”

…“I believe that the heavens are God’s billboard – that he has been sending signals to planet Earth and we just haven’t been picking them up,” Hagee told his San Antonio, Texas, congregation. “Today, with the help of God’s word and some very astute scientists, I’m going to walk you through 500 years (of four blood moons on Jewish feast days) and show you how God is literally screaming at the world: ‘I am coming soon.’”

“On the biblical Hebrew calendar, it was Elul 29, the Day of the Shemitah, to strike a nation’s financial realm,” Cahn said. “So the greatest crashes in American history, up to those days, each happened on the exact same biblical day, the day that just happened to be appointed to strike a nation’s financial realm, and exactly seven biblical years apart to the very day and the very hours.”

…Today, Franklin Graham, the president of the Billy Graham Evangelistic Association, said there is an urgency and sense “that the Lord Jesus could be returning soon.”

These are the Tea Party folks, this is the bedrock of the Republican Party. This is what evangelicals believe is true, but not in global warming. And you ask “How could they be so crazy as to shut down the government, and risk default? It makes no sense.”

Wrong: It makes perfect sense. The bedrock evangelical base of the Republican Party is crazy. Period. They are suffering from mass psychosis. They are led by simpletons like Graham, con-artists like Franklin, and sincere egomaniac loons like Cruz. And they vote.

They have to be stopped. It’s one thing to be nice to the village idiot, it’s another to let him run the village. 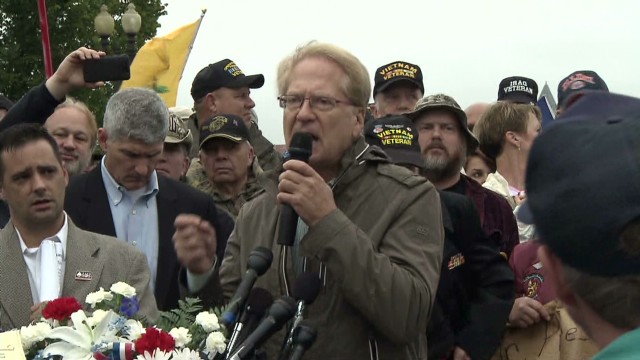 On the same site where the article above appeared, is this statement by Larry Klayman (of “Obama put the Koran down!” Sarah Palin rally fame):

“Consider these Facts requiring immediate action: Obama is not a natural born citizen as required by the Constitution eligible to run for and be elected president of the United States. Having lied about his place of birth, which was likely Kenya and not within the borders of territories of the United States, and not having two parents who were American citizens at the time of his birth, he later, after years of demands by concerned citizens, produced on the White House website a fraudulent birth certificate to try to subterfuge his deceit.”

Sure Billy and Franklin and Larry Klayman are only using the “end times” as a marketing tool for the latest book product Billy will sell before his own actual end time. And sure the editors of Christianity Today magazine and the rest of the “sane” evangelical establishment are pumping every bit of last Billy magic out of the old man they can grab before he goes, as they market his book and mortgage their futures by throwing in with this sort of Jesus-is-coming madness for profit. But there are millions who have mentally left planet earth because of the evangelicals. They have turned into a deluded fifth column of Tea Party/religious right insanity that risks the future of our country. From future shutdowns, defaults, Middle East wars to “defend Israel” and “fulfill prophecy,” not to mention the religious hysteria that fuels so many home-grown mass shootings, you know who to blame.

Frank Schaeffer is a writer. His latest book — And God Said, “Billy!“exploring the roots of American religious delusion, and offering another way to approach true spirituality, is on Kindle, iBook and NOOK for $3.99, and in paperback.

October 25, 2013
How To Make Peace Between the Tea Party and the Rest Of Us Without Killing Anyone
Next Post

October 28, 2013 Who Will Preach the Gospel to the Jesus-Hating Evangelical White Tribe?
Recent Comments
0 | Leave a Comment
"Agreed, Trump just used christianity to try and get the votes from the strong christian ..."
Rick James Evangelical Authoritarianism and Fear in America: ..."
"Except that Rapture is not mentioned anywhere in the Bible, or in any other source ..."
Starsatyr Tim LaHaye is dead but his ..."
"Good article, but I believe a tad outdated now 4 years later. While the Moral ..."
Kirk Leavens An open letter to the Republican ..."
"Praying deconverted me. So yes, Christians, keep praying."
Captain Cassidy Evangelical and/or Post-Evangelical Christianity, “Progressive” or ..."
Browse Our Archives
get the latest from
News and Politics
Sign up for our newsletter
POPULAR AT PATHEOS News and Politics
1

As we watch Trump abuse and...
Why I Still Talk to Jesus -- In Spite of Everything
2

The Terrifying Truth about the USA...
Why I Still Talk to Jesus -- In Spite of Everything
3

Everything or Nothing
Every life within every generation must struggle between the appearance of nothing...
view all News and Politics blogs
What Are Your Thoughts?leave a comment
Copyright 2008-2021, Patheos. All rights reserved.