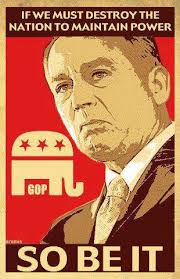 The 40 Fools in Congress (the extremist driving this shutdown show) might as well be a global militant Islamist organization founded by Osama bin Laden in Peshawar, Pakistan. Speaking as the father of a US Marine who spent 2 tours in Afghanistan hunting for bin Laden, I say to the Tea Party/Congressional 40: Please take off those flag pins!

After the faith, credit and economy of the US risks being shattered, then recovers, and this shutdown is all said and done, where do “patriots” like Limbaugh hide? Where does Fox News next lead it’s sad-sack aging losers? Where does Franklin Graham find new lies to tell about the president that anyone will believe?

Game over. As USA Today put it,

“In this case, however, the ‘they’re all bums’ reaction is off-base. This shutdown, the first in 17 years, isn’t the result of two parties acting equally irresponsibly. It is the product of an increasingly radicalized Republican Party, controlled by a disaffected base that demands legislative hostage-taking in an effort to get what it has not been able to attain by the usual means: winning elections.”

And they know it. So it’s scorched earth time! We didn’t win so we’re taking you all down with us!

Problem is the 40 radical Tea Party none-too-bright congressmen and their Fox News/Limbaugh echo chamber are holding the rest of us hostage. The 40 Fools are using terror tactics only one step up from a suicide vest attack.

I’ve been thinking about what makes people like this tick– tick like time bombs. My new book And God Said, “Billy!” is a description of the anatomy of religious delusion that’s paved the way through the religious right for these people. It’s the world I grew up in.

When I wrote “Billy!” I thought I might have painted too farfetched a picture of the antics that right wing delusional religion-based thinking can lead a person to commit. No such luck! As the Republican Party and their religious right backers just proved by shutting down our government, there’s nothing too far fetched when it comes to what they’re up to.

Even the Murdoch-owned right wing editorial page of the Wall Street Journal knows the truth and posted this rebuke to their very own dumb losers in Congress: “But sooner or later the GOP will have to fund the government and raise the debt ceiling that expires two weeks from now.”

The silver lining here is that this emperor of right wing delusional mythology really is naked. Now, once and for all the whole world — and plenty of thoughtful conservative southern Republican-voting Americans too — will know it. The excuses are pure BS. The 40 Fools just don’t like the president and have never accepted the election result. As the Chicago Sun Times put it: “The federal government is partially shut down because an extreme faction of House Republicans is using its leverage to try to derail the Affordable Care Act.”

The religious right/libertarian/right put these Tea Party clones in our Congress. Evangelical voters helped put them there. We can’t deport all these folks or order a drone strike. And the myth-hugging minority of people who voted for the 40 Fools can’t be deported. But maybe we can all see through their silliness once and for all and agree never again!

The 40 Fools are doing to America’s reputation and economy what Bin Laden didn’t manage to do on 9/11. If we go along, they will, like all terrorist hostage takers just ask for more concessions.

Just say NO to them for all of us Mr. President!

One good thing: there’s no place left to hide for these hostage takers. They’ve stripped bare their ideology and shown it as empty and unimaginably dumb. The towers of our economy, civil society and democracy they just flew their hijacked shutdown delusions into are metaphorically falling. When the dust clears — and it will — the 40 Fools and their congressional and media echo chamber accomplices are going to learn what the rest of us thought of their antics.

Frank Schaeffer is a writer and author of And God Said, “Billy!” on Kindle and NOOK for $3.99 and in paperback.

October 2, 2013
Send the Bill For the Shutdown to the Evangelicals
Next Post

October 5, 2013 The GOP Shutdown is a Godsend for the Emergent/Convergent Progressive Churches and Will Pay my Electric Bill Too!
Recent Comments
0 | Leave a Comment
"Agreed, Trump just used christianity to try and get the votes from the strong christian ..."
Rick James Evangelical Authoritarianism and Fear in America: ..."
"Except that Rapture is not mentioned anywhere in the Bible, or in any other source ..."
Starsatyr Tim LaHaye is dead but his ..."
"Good article, but I believe a tad outdated now 4 years later. While the Moral ..."
Kirk Leavens An open letter to the Republican ..."
"Praying deconverted me. So yes, Christians, keep praying."
Captain Cassidy Evangelical and/or Post-Evangelical Christianity, “Progressive” or ..."
Browse Our Archives
get the latest from
News and Politics
Sign up for our newsletter
POPULAR AT PATHEOS News and Politics
1

The Rich Spiritual Life of 2 NFL-players with...
The next time you’re feeling sorry for yourself—maybe you’ve had a bad...
view all News and Politics blogs
What Are Your Thoughts?leave a comment
Copyright 2008-2021, Patheos. All rights reserved.