Mandela: The Destroyer of Calvinism and Bad Theology 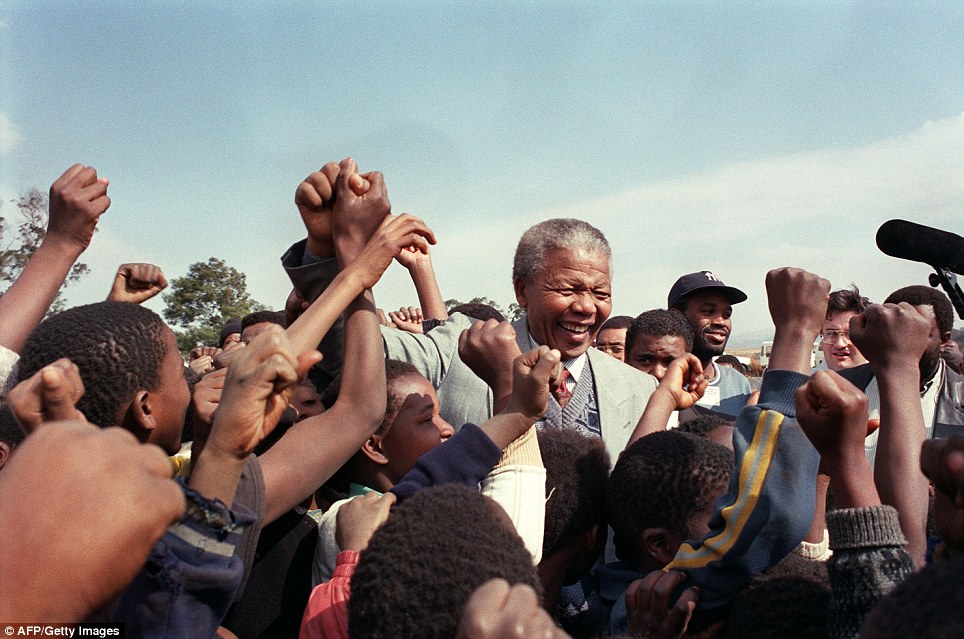 I remember Mandela. Mandela will be remembered in many ways, but for me he’s the giant that replaced bad theology with love and was able to change the world. While I was living in South Africa, Nelson Mandela was still in prison. Apartheid was crumbling. So Mandela had already destroyed the Calvinism that had imprisoned him and his country. From behind bars he’d replaced the fatalistic racism of Calvinistic theology with the open ended loving forgiving God of reconciliation. Instead of accepting an idea of predestination and categorizing the human race into “lost” and “saved” and “black” and “white” Mandela accepted everyone as a child of God. For him there was no longer a “per-ordained” fate. History and destinies could be changed.

There is a reason that the central “character” of my novel And God Said, “Billy!“ exploring the roots of American religious delusion, and offering another way to approach true spirituality, is apartheid South Africa. In Apartheid we see the logic of Protestant/evangelical theology. If you want to know what America would be like if the Religious Right won, look no farther than the South Africa I lived in while directing two Hollywood feature films in the late 1980s. It was no coincidence that South Africa was a church going country. And the apartheid regime found its justification in the Bible.

So in my novel the moment of truth comes when my character “Billy” is arrested and confronts – as a white man – the evil of Calvinism that had imprisoned 30 million blacks. He gets treated as a proxy the way everyone that Calvinists believe are predestined to inferiority and/or damnation are treated by their angry god or by his despicable followers.

And it’s no coincidence that in And God Said, “Billy!“ that I mention Rousas Rushdoony, the father of the American “Reconstructionist” movement who tried to “bring America back to God” i.e., back to the Bronze Age Old testament era. Gays would be killed, women forced to stay home, children indoctrinated and the races separated as the Bible “commands.”

In a scene in And God Said, “Billy!” the cop who arrests my character Billy launches a Reconstructionist/Calvinist rant. Here’s how the scene unfolds:

“I will tell you the story you should be making in your movie! This is the script that I shall write someday and I will find you and you will make this movie! The world must know the truth! December 16, 1838 was the Battle of Blood River!” he yelled. “I will bring you a script and you will tell the story of my Boer People who were of the dispersed House of Israel just as your godly American settler peoples also were. In our film you will show that we Boer were gathered to Cape Province first by the Netherlanders who settled the Province at the same time as the Scottish settlers settled in the Plantation of Northern Ireland called Ulster and at the same time as your James Town settlement and your Pilgrim Fathers were also planting the seed of the New Israel in your country. God was working to fulfill His Covenant purpose as we read of it in Deuteronomy, that He fixed the bounds of the nations. God reserved the very best parts of the earth with the agriculture and minerals best suited for all of us of the New Israel. My People’s Voortrekkers left the Cape Colony in our little wagons just as your God-fearers with their little wagons trekked to your West. Our Voortrekkers’ purpose was to trek into the interior and there to peacefully establish our free states. There were no natives there in those times. There were no colored or black peoples there! The Zulu and Bantu and other dark animals were moving down to the region too but we and they were trekking into the empty region at the same time as my people! Let no one tell you that our Sacred Land was stolen from the kaffir! It was empty! Satan’s dark ones attacked my people and they killed many, many Voortrekkers. But we selected a new leader a man called Andries Pretorius, a man of God, a strict Calvinistic man, a man who knew God’s Word. On the 16th of December 1838 our Voortrekkers found themselves surrounded by twenty thousand Zulus. There were only four hundred and sixty Voortrekkers! What did my people do? They prayed together! They formed their wagons into a laager. Inside this sacred circle the Boer prayed and we made a holy vow to Almighty God. And this is what my People said: ‘If His protection is with us we will give Him the honor and the glory and we will share this miracle with our children for generations to come and we will keep this day forever as a Holy Sabbath.’ That was the Oath of Blood River that God’s New Israel People took! The God of Heaven who in Deuteronomy said, ‘Fear not for the Lord your God shall fight for you,’ performed the miracle of deliverance for my people and we defeated the Zulu! Some of the surviving Zulu were captured. They said that they had seen white shinning angels on a cloud above our circle of wagons and that these angels were shooting down on them! THAT is the movie we will make! I will find you and I will have a script and you will tell this true story to the world!”

As I said, Mandela will be remembered in many ways, but for me he’s the giant that replaced bad theology with love and was able to change the world.

Frank Schaeffer is a writer. His latest book — And God Said, “Billy!“ exploring the roots of American religious delusion, and offering another way to approach true spirituality, is on Kindle, iBook and NOOK for $3.99, and in paperback.

December 2, 2013
Why I'm Not an Athiest: My Online Video Course is Launched by CHURCH NEXT
Next Post

December 11, 2013 The Mystery Beyond Death: The Meaning of Christmas
Recent Comments
6 Comments | Leave a Comment
"Agreed, Trump just used christianity to try and get the votes from the strong christian ..."
Rick James Evangelical Authoritarianism and Fear in America: ..."
"Except that Rapture is not mentioned anywhere in the Bible, or in any other source ..."
Starsatyr Tim LaHaye is dead but his ..."
"Good article, but I believe a tad outdated now 4 years later. While the Moral ..."
Kirk Leavens An open letter to the Republican ..."
"Praying deconverted me. So yes, Christians, keep praying."
Captain Cassidy Evangelical and/or Post-Evangelical Christianity, “Progressive” or ..."
Browse Our Archives
Related posts from Why I Still Talk to Jesus -- In Spite of Everything

Art Lesson
The mind moves like a pencil. The heart moves like a brush....
view all News and Politics blogs
What Are Your Thoughts?leave a comment
Copyright 2008-2021, Patheos. All rights reserved.
Close Ad