Is it Just Charisma magazine or are all Charismatic Christians Into Genocide? 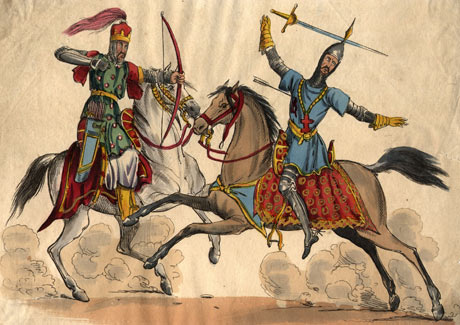 Charisma magazine, the major media outlet for Pentecostal Christians–“empowering believers for a life in the Spirit”–published an article calling for genocide. The article said:

“Now the only question is how many more dead bodies will have to pile up at home and abroad before we crush the vicious seed of Ishmael in Jesus’ Name? …May we be willing to take the lesser pains now so our children won’t have to take greater pains later.”

Titled “Why I Am Absolutely Islamaphobic” by Gary Cass, the article says “every true follower of Mohammed” is out to “subjugate and murder” non-Muslims.

So… Muslims have to undergo mass conversion to Christianity or face deportation combined with forced eugenics. “Force them all to get sterilized.”

Then there’s expel them “like Spain was forced to do when they deported the Muslim Moors.”

Spain also by the way did the same thing to Jews.

He must mean  the Crusades

Is the American Charismatic idea “empowering believers for a life in the spirit,” of Spirit-filled “Just War” a war against on civilian populations?

Again, the point of the article?

Now the only question is how many more dead bodies will have to pile up at home and abroad before we crush the vicious seed of Ishmael in Jesus’ Name?

Charisma took the article down after an outcry BUT WITH no retraction!  And no editor resigned or was fired. (The original link goes to an ” error ” message now. It’s available at its author’s personal website).

Phil Robertson (Duck Dynasty) suffered no loss of popularity after he appeared on Sean Hannity saying America should “convert them or kill them” re ISIS and Muslims I take it.

Last time I checked Charismatic Christians say they believe in the Bible. Therein lies the problem.

It’s tough to rehabilitate the judgmental misanthropic spirit of Divine Pettiness who commands no beard trimming, “lest the land vomit you also out when you defile it,” as The-God-Of-The-Bible says. “For whoever commits any of these abominations, the persons who commit them shall be cut off from among their people” (Leviticus 18:24).

What’s more, The-God-Of-The-Bible doesn’t seem terribly concerned with being sensible (let alone nice) when issuing His long lists of Dos and Don’ts: Don’t clip your beard or defile yourself with menstrual blood, but Do help yourselves to slaves, and have your way with them:

“You may buy male and female slaves from among the nations that are around you. You may also buy from among the strangers who sojourn with you and their clans that are with you, who have been born in your land, and they may be your property. You may bequeath them to your sons after you to inherit as a possession forever. You may make slaves of them, but over your brothers the people of Israel you shall not rule, one over another ruthlessly” (Leviticus 25;40–45).

Joshua, is a one-man serial killer hero to Jews and Christians alike:

ISIS is foremost a threat to other Muslims. That being the case maybe Bible believers should join and replicate their God’s command to kill!

Charisma magazine is in good company.  In the Book of 1 Samuel, God instructs King Saul to attack the Amalekites:

“And utterly destroy all that they have, and do not spare them,” God speaks through the prophet Samuel and says, “But kill both man and woman, infant and nursing child, ox and sheep, camel and donkey.”

When Saul fails to murder enough women and children, God removes his kingdom. Saul has committed a dreadful sin. He failed to complete genocide.

If to be a Christian is to believe and follow the Bible literally, then maybe ISIS is a Christian organisation. It’s getting the genocide part right.

But wait, I thought Jesus changed all that? Jesus was many things but not an evangelical Christian. Every time Jesus talked about his “bible” (the Torah) he undermined his scriptures and erred on the side of non-judgmental co-suffering love.

So maybe Charisma magazine hates Jesus and is working tirelessly to destroy his reputation. Jesus put love ahead of following a very flawed book.

WHY I AM AN ATHEIST WHO BELIEVES IN GOD is being used by many book groups, churches and college classes. It is one of the TOP 10 most popular book club nonfiction books.

Contact Frank Schaeffer (below) to book a Skype or speaker phone Q&A FREE with him for your study or book group.

October 8, 2014 "Dear Frank, Thanks to you, as a Jew I can say that I am a follower of Jesus"
Recent Comments
0 | Leave a Comment
"Good article, but I believe a tad outdated now 4 years later. While the Moral ..."
Kirk Leavens An open letter to the Republican ..."
"Praying deconverted me. So yes, Christians, keep praying."
Captain Cassidy Evangelical and/or Post-Evangelical Christianity, “Progressive” or ..."
"ALL Christians voted for President Trump. On NOV 8 2016 the choice was do you ..."
Dry Loop The Case For Impeachment Grows
"The freakin Rev Jim Wallace of Sojourners Mag would fit in here nicely as well. ..."
Dry Loop For Years Some Have Described White ..."
Browse Our Archives
Follow Us!

Key to Your Intuition
We all have intuition, but so often we ignore both the whispers...
view all News and Politics blogs
What Are Your Thoughts?leave a comment
Copyright 2008-2020, Patheos. All rights reserved.