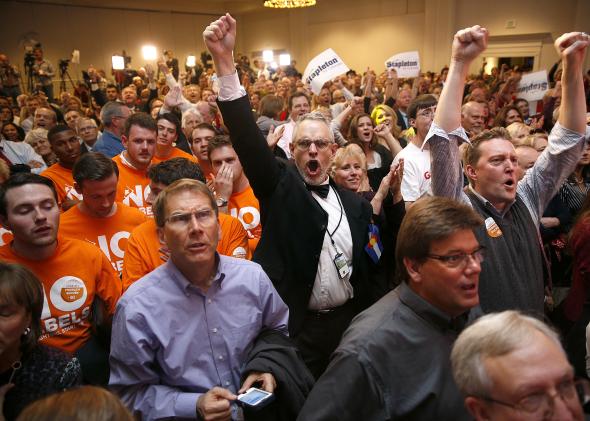 As Thomas B Edsall notes in the New York Times, (The Demise of the White Democratic Voter 11/12/2014) “It has not escaped the notice of political analysts that 72 percent of whites without college degrees — a rough proxy for what we used to call the white working class — believe that ‘the U.S. economic system generally favors the wealthy.’ Or that on Nov. 4, these same men and women voted for Republican House candidates by a 61-31 margin.

Maybe white men aren’t just stupid but have been conditioned. How else to explain that 64 percent of white men voted for Republicans even when on things like the minimum wage and their belief that the rich have suckered the rest of us, they seem to have a grasp of the facts? How to explain that they ignored the great news on the economy and jobs in favor of anti-Obama lies?

One reason is as I explain in my new book WHY I AM AN ATHEIST WHO BELIEVES IN GOD: How to give love, create beauty and find peace: the evangelical mind is one trained from birth to accept myth instead of facts.

But crazy religion aside, how did people get to the point where they would rather believe that Ebola is a crisis and ISIS a threat than the happy facts about where the American economy stands?

Maybe Amanda Marcotte has it right when she writes:

Revenge of the white guys! There are two ways to interpret this news: that the “war on women” narrative is no longer working for the Democrats, or that the “war on women” isn’t just a Democratic campaign slogan but a brutal fact of our modern political landscape. I lean toward the latter: The Democrats got their asses handed to them by a white male electorate that turned out in an effort to fight their eroding cultural dominance. Republicans got a further assist by the traditional lower midterms turnout among single women, younger people, and people of color—the very demos that have white men so worried.

I think there’s more. Fox News has successfully unhinged a big chunk of our white male population. After all these are the guys that stripped the shelves bare of ammunition because they believed that “Obama will take away all our guns!” So who are they? As “ram2008” posted on the Democratic Underground site way back in 2012:

I just got back from a family dinner and words cannot describe how let down I was … First of all, these are people who don’t really follow politics at all but would rather discuss sports… or how their kid scored a goal in soccer. They don’t really identify with either party, have a narrow grasp of the issues, and are pretty much what you would call the “undecided independents” in the election. But on the off chance they wander into a voting booth, it truly scares me how easy it is for these people to be manipulated.

So… dinner happens.. and the first shots are fired from my cousin : “Have you guys seen the Obama 2016 movie… just saw it last night, it’s so scary, we can’t let Obama win again!”

My other cousins boyfriend chimes in: “Yeah my dad says Obama’s going to destroy this country!”… Then my aunt chimes in and makes it a 3 on 1 “These are real FACTS! It’s IN the movie, didn’t you see?! ANSWER THIS THEN, WHY IS OBAMA CUTTING THE MILITARY! WHY IS HE DOING THAT, WHY!!” She becomes unhinged and starts yelling that thinking shes made a point.

The other cousin chimes in too saying ” yeah in the video they showed what happens if Obama wins and they showed a map of the United States of Iran.. that’s why!”

Next my other aunt… starts going off on WHERE IS THE GAS? (we’re in NY), WHY ISN’T THERE ANY OF IT, WHAT’S OBAMA DOING?

When real facts are thrown in their face they don’t know how to react. It’s absolutely nuts that these adults are so easily fooled.. and it is all based on fear propagated by FauxNews and crew, it disgusts me…

So who votes Republican after Obama led our country back our of the mess W made? Here’s a key data point from Frank Rich’s profile of Fox News:

Fox News is losing younger viewers at an even faster rate than its competitors. With a median viewer age now at 68 according to Nielsen data through mid-January (compared with 60 for MSNBC and CNN, and 62 to 64 for the broadcast networks), Fox is in essence a retirement community … If it is actuarially possible, its median viewer age will keep creeping upward. (It rose by two years over the course of 2013.)

Researchers at Fairleigh Dickinson University updated a study they had conducted in late 2011.  As the study explained, though, people who watched only Fox News fared worse:

The reason aging provably ignorant, white (mostly southern and Midwest) males continues to watch Fox News is that it doesn’t upset their semi-evolved dominant male primate world view.  The narrative that Fox News spreads isn’t overly explicit. Rather it hints then hints again and again that our problems are the result of “those people”: the gays, immigrants, minorities, “the terrorists,” liberals, intellectuals… And of course Obama is illegitimate…

It’s not hard to see, then, why a majority of white midterm voters withheld support from Democrats and cast their votes for Republicans. They watch FOX. Period. The white vote in the years since 1992 has become consistently more committed to Republican candidates. Mitt Romney carried whites by a 20-point margin, 59-39, larger than either John McCain, 12 points, or George W. Bush, 17 points.

Reality and myth have parted ways on FOX. Shame on them and shame on the mostly evangelical white dupes who have believed their lies. Then again, as I say in my book, why should that surprise us? The average Fox viewer does not believe climate change is real but he does believe in Noah’s Ark.

November 13, 2014 My "Morning Edition" NPR Interview ( Please take the short 9 minutes this interview takes and join me as I explain my book)
Recent Comments
0 | Leave a Comment
Browse Our Archives
Follow Us!

How to Live in the Now
We speak of time as though it has three parts—past, present, and...
view all News and Politics blogs
What Are Your Thoughts?leave a comment
Copyright 2008-2020, Patheos. All rights reserved.