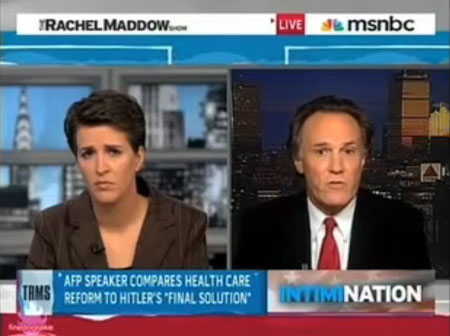 So here’s my question: Are the so-called New Atheists paying evangelical leaders like Franklin Graham, Mike Huckabee and D. Michael Lindsay to make Jesus look stupid? Or as I write in my new book WHY I AM AN ATHEIST WHO BELIEVES IN GOD: How to give love, create beauty and find peace (Chapter 9, page, 45):

Sam likes to call me out of the blue and casually mention the latest dumb stunt perpetrated by the Religious Right, the Roman Catholic bishops or the Republican Party, as if I have anything to do with it. He pretends I’m still one of “them” whenever “they” do something insane. A televangelist says gay people are going to hell… A bunch of bishops try to ban women from getting insurance coverage for contraceptives… Sam is on the phone!

Rachel: “Frank, you used to be one of them so tell us, how dumb are these people?”

Rachel: “How dangerous are they?”

Me: “Very dangerous. Buy my new book and you’ll know why!”

It’s a living… of sorts.

As noted in the Guardian, Russian President Vladimir Putin, in his war against the West has “deployed heavy military equipment, energy-supply blackmail, cyber-attack, propaganda by sophisticated, well-funded broadcasters, covert operations and agents of influence in EU capitals – oh yes, and Russian bombers nosing up the English Channel with their transponders off, potentially endangering civilian flights.”

As noted in the Religious News Service, Evangelist Franklin Graham praised Putin for his aggressive crackdown on homosexuality, saying his record on protecting children from gay “propaganda” is better than President Obama’s “shameful” embrace of gay rights.

The Russian law came under heavy criticism from gay rights activists, and from Obama, ahead of the Winter Olympics in Sochi, Russia. In response, Obama included openly gay athletes as part of the official U.S. delegation to Sochi.Graham, who now heads the Billy Graham Evangelistic Association started by his famous father, praises Putin in the March issue of the group’s Decision magazine for signing a bill that imposes fines for adults who promote “propaganda of nontraditional sexual relations to minors.”

“In my opinion, Putin is right on these issues,” Graham writes. “Obviously, he may be wrong about many things, but he has taken a stand to protect his nation’s children from the damaging effects of any gay and lesbian agenda.”

“Our president and his attorney general have turned their backs on God and His standards, and many in the Congress are following the administration’s lead. This is shameful. Isn’t it sad, though, that America’s own morality has fallen so far that on this issue — protecting children from any homosexual agenda or propaganda — Russia’s standard is higher than our own?”

Meanwhile, according to the Boston Globe, Gordon College president D. Michael Lindsay, established his legacy as a leading homophobic evangelical fearing loss of religious freedom if he had to obey anti-discrimination laws was among 14 religious leaders who sent a letter to the White House this week requesting a religious exemption to a planned order barring federal contractors from discriminating in hiring on the basis of sexual orientation.

“Without a robust religious exemption . . . this expansion of hiring rights will come at an unreasonable cost to the common good, national unity and religious freedom,” reads the letter, signed by Gordon College president D. Michael Lindsay as well as the chief executive of Catholic Charities USA, the executive editor of Christianity Today, prominent evangelical pastor Rick Warren, and other Christian leaders.

Not to be outdone as noted by the Guardian, Mike Huckabee, recent statements, too, appear calibrated not only to “appeal exclusively to his former audience, but to presume that no other audience [other than evangelicals] exists. Accusing Jay-Z of pimping out Beyoncé is the filet mignon of culture-war red meat, but it’s only useful if you don’t need black people, feminists or fans of recent pop music to vote for you. And the thesis of his newest book, narrowed down to the micro example of women on the east coast who swear and women in the heartland who don’t, was absurd enough that Fox News’ Megyn Kelly did the brassy east coast version of telling him to go outside and cut her a switch.

So here’s my question once more: Are the so called New Atheists paying evangelical leaders like Franklin Graham, Mike Huckabee and D. Michael Lindsay to make Jesus look stupid? Call me Rachel! And BTW: before you “nones” (and survivors of religion) write off all spirituality as a crock, please do read my new book. Jesus isn’t the idiot Franklin Graham, Mike Huckabee and company make him out to be.

February 5, 2015
BUSH "LEGACY" FINISHED-- Should We Have Attacked the Saudis-Not Iraq? I Told You The Saudi-9/11 Story was Going to be HUGE NOW NYT TOP OF THE PAGE HEADLINE
Next Post

February 6, 2015 Southern Whites Might as Well Have Invented ISIS Burning People Alive: They Conducted the "Master Class" in Violence
Recent Comments
0 | Leave a Comment
"Except that Rapture is not mentioned anywhere in the Bible, or in any other source ..."
Starsatyr Tim LaHaye is dead but his ..."
"Good article, but I believe a tad outdated now 4 years later. While the Moral ..."
Kirk Leavens An open letter to the Republican ..."
"Praying deconverted me. So yes, Christians, keep praying."
Captain Cassidy Evangelical and/or Post-Evangelical Christianity, “Progressive” or ..."
"ALL Christians voted for President Trump. On NOV 8 2016 the choice was do you ..."
Dry Loop The Case For Impeachment Grows
Browse Our Archives
get the latest from
News and Politics
Sign up for our newsletter
POPULAR AT PATHEOS News and Politics
1

The River of Contemplation (Nature and Soul, the...
by Thomas Schenk When I was young, I lived in a house on...
view all News and Politics blogs
What Are Your Thoughts?leave a comment
Copyright 2008-2021, Patheos. All rights reserved.