How Billy Graham prepared the country for Donald Trump 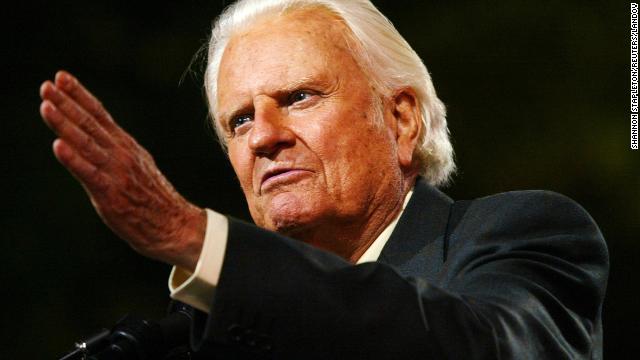 Billy Graham, prepared the country for Donald Trump, as it were. What a perfect match Tea Party delusion and evangelical delusion turned out to be.

A new national poll released last Tuesday has found that a majority of the Republican Party is living in a fantasy-land. That delusion broke-brain state was created for them by evangelicals.

Remember that 50 percent of Republican primary and caucus voters have been white evangelical, or born again, Christians, based on CBS News polling.

Believing in the reality of Noah’s Ark, creationism, a literal heaven and hell (but no global warming)  and that gay marriage is a sin and such is good preparation for also believing Donald Trump’s vision of the world.

As I point out in my new book WHY I AM AN ATHEIST WHO BELIEVES IN GOD: How to give love, create beauty and find peace — live in one bubble of unreality– where facts, truth, history and science don’t matter– and you transition easily to another bubble something like a heroin addict transitioning to methadone…

So let’s juxtapose the poll’s findings with what evangelicals believe as drawn from Christianity Today magazines’ own statement of faith.

When you are done reading this you’ll know the answer to the question: “But how could anyone get that stupid?” By believing this:

The sixty-six canonical books of the Bible as originally written were inspired of God, hence free from error. They constitute the only infallible guide in faith and practice. (CT statement of faith)

Billy Graham fathered CT magazine. And CT magazine is the evangelical bastion of reactionary backward “Christianity” as was demonstrated again recently when the magazine threw longtime evangelical leader Tony Campolo under the bus because he came out as supporting gay marriage.

They went further: CT threw one of their own stars– David Neff under the bus too.

In fact they did the evangelical equivalent of an ISIS beheading by saying they were “saddened” by his apostasy. This is code for cancel all his speaking engagements, declare him no longer one of us, in effect kill him by killing his reputation. Campolo watched as virtually all his evangelical speaking engagements were canceled as soon as this article hit as he told me when he and Peggy stopped by for a drink a few weeks ago.

When a prominent evangelical leader, like Tony Campolo, announces his support for gay marriage, it’s likely to get reporters’ attention. It is indeed news, in that it is still unusual to hear an otherwise orthodox Christian announce heterodox views on sexuality. But in the case of Campolo, it may not be the kind of news that garners much attention. (One reason: His organization Red Letter Christians has argued for same-sex marriage several times.)

But we were surprised when former CT editor David Neff on Facebook praised Campolo’s move. As he put it in an email to me clarifying his comment, “I think the ethically responsible thing for gay and lesbian Christians to do is to form lasting, covenanted partnerships. I also believe that the church should help them in those partnerships in the same way the church should fortify traditional marriages.”

At CT, we’re saddened that David has come to this conclusion. Saddened because we firmly believe that the Bible teaches that God intends the most intimate of covenant relationships to be enjoyed exclusively by a man and a woman. We’ve stated this view explicitly in many editorials, and it is implicit but clear in many of our feature stories.

With evangelicals like CT at the helm of the Fox News crowd, is it any wonder that Public Policy Polling’s analysis said: “Our new poll finds that [Donald] Trump is benefiting from a GOP electorate that thinks Barack Obama is a Muslim and was born in another country,” …  “Sixty-six percent of Trump’s supporters believe that Obama is a Muslim to just 12 percent that grant he’s a Christian. Sixty-one percent think Obama was not born in the United States to only 21 percent who accept that he was.”

What do the words “free from error” re the Bible in the CT statement of faith  mean anyway? In other words what has Billy Graham been preaching all these years?

It means that the editors of Christianity Today and their mentor and founder Billy Graham– believe this, literally—

No one whose testicles are crushed or whose male organ is cut off shall enter the assembly of the Lord. Deuteronomy 23:1If two men, a man and his countryman, are struggling together, and the wife of one comes near to deliver her husband from the hand of the one who is striking him, and puts out her hand and seizes his genitals, then you shall cut off her hand; you shall not show pity. Deuteronomy 25:11-12 Anyone arrogant enough to reject the verdict of the judge or of the priest who represents the LORD your God must be put to death. Such evil must be purged from Israel. (Deuteronomy 17:12)

As you approach a town to attack it, first offer its people terms for peace. If they accept your terms and open the gates to you, then all the people inside will serve you in forced labor. But if they refuse to make peace and prepare to fight, you must attack the town. When the LORD your God hands it over to you, kill every man in the town. But you may keep for yourselves all the women, children, livestock, and other plunder. You may enjoy the spoils of your enemies that the LORD your God has given you. If a man is caught in the act of raping a young woman who is not engaged, he must pay fifty pieces of silver to her father. Then he must marry the young woman because he violated her, and he will never be allowed to divorce her. Deuteronomy 22:28-29The ark of God was placed on a new cart and taken away from the house of Abinadab on the hill. Uzzah and Ahio, sons of Abinadab guided the cart, with Ahio walking before it, while David and all the Israelites made merry before the Lord with all their strength, with singing and with citharas, harps, tambourines, sistrums, and cymbals. When they came to the threshing floor of Nodan, Uzzah reached out his hand to the ark of God to steady it, for the oxen were making it tip. But the Lord was angry with Uzzah; God struck him on that spot, and he died there before God. (2 Samuel 6:3-7 )Make ready to slaughter his sons for the guilt of their fathers; Lest they rise and posses the earth, and fill the breadth of the world with tyrants. (Isaiah 14:21)Anyone who is captured will be run through with a sword. Their little children will be dashed to death right before their eyes. Their homes will be sacked and their wives raped by the attacking hordes. For I will stir up the Medes against Babylon, and no amount of silver or gold will buy them off. The attacking armies will shoot down the young people with arrows. They will have no mercy on helpless babies and will show no compassion for the children. (Isaiah 13:15-18)However, you may purchase male or female slaves from among the foreigners who live among you. You may also purchase the children of such resident foreigners, including those who have been born in your land. You may treat them as your property, passing them on to your children as a permanent inheritance. You may treat your slaves like this, but the people of Israel, your relatives, must never be treated this way. (Leviticus 25:44-46)When a man strikes his male or female slave with a rod so hard that the slave dies under his hand, he shall be punished. If, however, the slave survives for a day or two, he is not to be punished, since the slave is his own property. (Exodus 21:20-21)Slaves, obey your earthly masters with deep respect and fear. Serve them sincerely as you would serve Christ. (Ephesians 6:5)Christians who are slaves should give their masters full respect so that the name of God and his teaching will not be shamed. If your master is a Christian, that is no excuse for being disrespectful. You should work all the harder because you are helping another believer by your efforts. Teach these truths, Timothy, and encourage everyone to obey them. (1 Timothy 6:1-2)

The PPP poll  found that a majority of Republicans believe that Obama was not actually born in Hawaii. These are not civilized people but unreconstructed religious extremists who literally believe that the Bible advocates the sort of things ISIS does every day. That IS what “Bible – believing” means.

Tea Party/Fox-News myth plays into the CT/Graham fantasy-land mindset and uses it to push the extremist anti-environmental Koch Brothers agenda. But who turned these people’s brains to cream cheese to begin with? Answer: the folks who at CT quietly assassinate reputations by declaring they are “praying” for the fallen or are “saddened” by their fall.

According to the PPP poll,  51 percent of all Republicans polled want to amend the Constitution to eliminate birthright citizenship, which is granted to any person born on U.S. soil.

Of Trump’s supporters, 63 percent want to eliminate that right, and a majority said undocumented children should be deported. Where did they learn to hate? Hint: Slaves, obey your earthly masters with deep respect and fear. Serve them sincerely as you would serve Christ. (Ephesians 6:5) “Slaves” equals brown and black people to these folks, it says so in the Bible, just like Trump says when he confirms that they are all “rapists” .”

September 2, 2015
Saudi Arabia’s export of Wahhabi puritanical Islam has been one of the worst things to happen to Muslim World
Next Post

September 9, 2015 3 Selfie Art Videos Explaining/Showing My Paintings re Life, Flowers, God and Grandchildren
Recent Comments
0 | Leave a Comment
Browse Our Archives
Related posts from Why I Still Talk to Jesus -- In Spite of Everything

The Problem I Have With Prayer
‎ Let's talk about the incident with Damar Hamlin the other night...
view all News and Politics blogs
What Are Your Thoughts?leave a comment