An open letter to the Republican establishment leadership 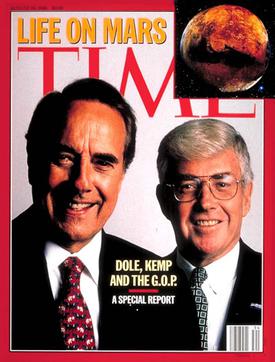 I used to be one of you. When I was a religious right activist in the 1970s and 1980s. I fondly remember staying with my friends Jack and Joanne Kemp in their home in Washington DC. Jack was the quintessential establishment Republican of that day. He would go on to run as the vice presidential candidate with Bob Dole.

Jack hosted a meeting at the Rayburn House in Washington DC for 50 Congressman and Senators one night in the early 1980s when he presented the film series I produced and directed “Whatever Happened to the Human Race?”.

That series was the work of Dr. C. Everett Koop (who went on to become Reagan’s Surgeon General) and my late father the evangelical evangelist Francis Schaeffer. (The film critic for the Washington Post, Judy Mann, … in her her film review, fueling accusations of liberal collusion, said that Bishop Fulton Sheen, was one of our colleagues and somehow an instigator of the series. He wasn’t. This was a strictly evangelical deal as it were. At the time people like Mann assumed that everything to do with the opposition to abortion was a Roman Catholic “issue”.)

If you’ve never heard of our movie series (and the book of the same title) you’ve certainly heard of the people it influenced like the folks who founded Operation Rescue and the rest of the radical “pro-life” movement not to mention the literally thousands of crisis pregnancy centers our series inspired tens of thousands of evangelical viewers to start.

By the late 1980s I’d left both my evangelical faith and the religious right. As the New York Times noted in a profile about me I was called a traitor by my former friends. I had grown disenchanted with the ugliness and insularity of our movement (gay bashing and such by people like Dad’s and my close friend the late Jerry Falwell).

By the 1990s right wing American politics had moved far away from the kind of conservatism Jack Kemp once represented. Where Jack reached out to minorities and got funding for housing and urban urban development projects, the right wingers in the GOP began to try to undo such things as affirmative action.

Where Jack had close friends in the black community and generally projected an image of tolerance far beyond mere conservative politics, the GOP became more and more about whites only agendas and was increasingly defined by excluding gays and trying to roll back women’s rights.

Jack and I had a mutual friend in William F. Buckley. He visited my father in Switzerland where Mom and Dad had their ministry of L’Abri called by the New York Times “a part seminary and part think tank.”.

I remember having tea with Bill several times. The three of us sat on my father’s chalet balcony discussing the ugliness of the John Birch society that Bill had stood up against. He’d used the National Review magazine to repudiate them. Dad complemented Bill on having “salvaged conservatism” from people Dad and Bill both referred to as “weirdos” and “nut jobs.”

Fred Koch, was a leader of the John Birch Society. These were the people Dad and Bill called weirdos. Bill gave his life to trying to rescue conservatism from these extremists.

The Koch sons would later revive the spirit of the John Birch society under a new more respectable name: the “Tea Party.”

Given that the Tea Party-dominated Republican Party became the party of the “You Lie!” Obama-obstruction era, the Koch brothers had succeeded in reintroducing the very note of hysterical paranoid racism into American politics. This was what Bill did had worked so hard to repudiate.

Bill would have never said Obama wasn’t a real American, let alone have gone along with the “birther” or “he’s a Muslim” nonsense.

Donald Trump did not come out of nowhere. He is the creation of the Birch/Koch brothers designs on our democracy. Now the Koch brothers and the Republican establishment are affraid of what they made.

Trump exists as the likely Republican nominee for two reasons:

First, Neil Postman’s prophetic book Amusing Ourselves to Death has been vindicated. It’s not coincidental that Donald Trump is a reality TV star. He is the face of an illiterate America that  gets its “facts” from TV news and talk radio hosts. He is the result of a celebrity “culture” gone wild.

Second, Donald Trump is the creation of white angry lower and middle-class Americans who have come through our educational system that failed to educate them. Sorry to be so blunt but Trump’s people never have or would have read the National Review. These are fact-free functional illiterates, creatures of TV news and celebrity culture, Postman’s walking dead. The are not moved by facts but their energy is fueled by overt racism, hate, xenophobia, isolationism and ignorance.

It turns out that what Bill Buckley misunderstood about America was the actual character of white America. Bill thought he could civilize conservatism. But the American right has never dealt honestly with the issue of race.

The American right has pretended to embrace desegregation and justice for all but in fact has harbored a hate-filled ignorant white segment who identify with some conservative values but actually are pure and simple fascist reactionaries. These people have always been looking for demagogues to follow in order to “take America back.” I know. For a while Dad and I had quite a few of these people following us. Some of them wound up bombing abortion clinics.

The Koch brothers winked at the haters as if they could be civilized or fooled. They can’t. The Republican establishment played along with people like Ted Cruz in his racist attempts to shut down the Obama presidency, up to the point of even risking our economy. The establishment made anti-Obama lies and hysterical claims “mainstream.”

You created the Trump climate. You unleashed hate of our first black president and made hate and obstruction respectable in a way Jack Kemp never would have.

Now you have what you paid for. Bill Buckley and Jack Kemp are gone.  Now you have the sons of the Birch Society funding the rabid dogs of chaos. Their man is Trump.

With Trump all the Buckley-type pretense of conservatives’ ability to moderate their fascist haters has been swept aside. Now everyone can see that the conservative think tanks, magazines like the National Review, serious conservative columnists and commentators are literally meaningless.

The truth is out: Trump is your man. His supporters were bought, fed lies, paid for and energized by the Koch/Birchers. Did they really believe that once they’d taught their dogs to kill they could call off the attack?

February 19, 2016
Here’s the Best Article Ever on the Fact that Ted Cruz is Literally the First Openly Reconstructionist/Theocracy Candidate to Run for President
Next Post

February 22, 2016 Here's My VIDEO (3 min) Where I "Explain" the DONALD to You
Recent Comments
0 | Leave a Comment
"it means she do tht "thing" with ML 6 years ago but she didnt recognize ..."
Lulzy If Trump Was Your Cousin Would ..."
"Can u pls give spoilersYX.QUJING.INFO/Y5324T"
Aziel The Case For Impeachment Grows
"Every teang can be solve by the TEAm!!mW.92187.ME/gg5324T"
All hail The Machine God Trump Is Delivering on the Religious ..."
"Shockingly, even the majesty couldn't handle the cuteness of her. 😳m.636WN.CO/D5324ll"
Nodlehs Does U2’s Bono Support Donald Trump?
Browse Our Archives
Related posts from Why I Still Talk to Jesus -- In Spite of Everything

The Man Who Found Success by Saying “Yes”...
What if you trusted the flow of life enough to completely let...
view all News and Politics blogs
What Are Your Thoughts?leave a comment