Is Hayley Williams Jesus? Here is What Empathy and Co-Suffering Love Looks Like in Action (From a Source You’ll Never Guess!) WATCH, LOVE & CRY 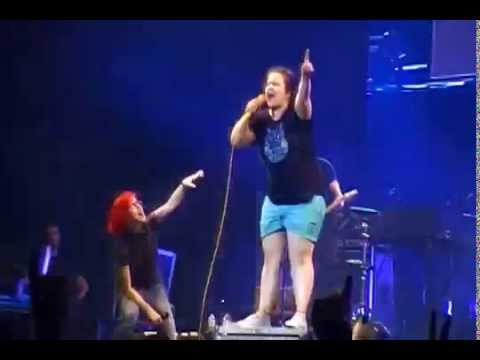 Remember that dumb line “What would Jesus do?” Well next time ask “What would rock star (Hayley Williams) do that makes her be Jesus to someone?”
…
“Anyway, here’s the video. It’s a short clip from a Paramore concert in Rio Di Janeiro. It’s a clip from a song called “Misery Business,” and it’s only two minutes long, so I’m going to need you to watch it. The clip starts with the band pulling a fan up onto the stage. She lets out a primal scream, and for a moment, she holds the entire world in her hands,” writes Chris Boeskool. He sent me this post part of which I ‘m reprinting here with his written permission.
A fan comes on stage then disaster strikes. Then “disaster” turns into grace. WATCH!

I don’t know much about this band. I don’t know their theology, and I don’t really care. All I need to know I see in that video. There were probably people in the crowd who laughed and made fun of her. In that same situation, some might have hurried over to her, as she laid on her back in front of thousands of people, and quickly tried to help her to her feet… in order to minimize her humiliation. And her shame.

But instead, what we see is a Love that rushes to the ground with us.

We see a Love that experiences what we have experienced.

We see a Love that knows how it feels to be humiliated. And broken.

We see a Love that encourages instead of trying to shame us.

We see a Love that gives us beauty for ashes.

We see a Love that lays itself down next to us, and encourages us to keep on rocking out.

We see a Love that declares, “This is my favorite person we’ve ever had on stage.”

We see an Incarnational Love. A Love that screams into the microphone,“EMMANUEL! GOD IS WITH US!!” And leaps into the air…

February 15, 2016
WATCH: Would You Let Any of These Snarky Teen Brats Babysit Your Child ?
Next Post

February 18, 2016 An Open Letter to Black Americans From This White Former Republican Religious Right Enemy: When it Comes to the Nomination of a New Supreme Court Justice, President Obama is Being Disrespected Because He's Black. Period!
Recent Comments
0 | Leave a Comment
Browse Our Archives
get the latest from
News and Politics
Sign up for our newsletter
POPULAR AT PATHEOS News and Politics
1