Why God Hates Donald Trump or at Least Ann Coulter Does .. so Why Do Jerry Falwell Jr. and Franklin Graham Love the Jerk’s-Jerk? 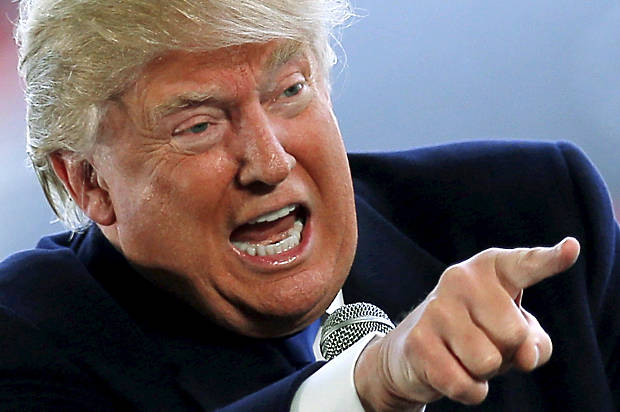 Will Jerry Falwell Jr. withdraw his endorsement, or are wives fair game at Liberty U? We are told in the Bible that God hates the proud. So if the Bible is ‘true,’ the way fundamentalists and evangelicals say it is, then God hates Trump. And if people who say the Bible is true vote for Trump then… God hates them too.

Proverbs 16:5 Everyone who is arrogant in heart is an abomination to the Lord; be assured, he will not go unpunished.

He did this during a period when all eyes were on Europe in the wake of another devastating terrorist attack, and he was simultaneously criticizing the president for continuing on his historic diplomatic mission to Cuba and Argentina. But that wasn’t what shocked the world. What has put every government on the planet on high alert was his alarming interview in the New York Times on the subject of foreign policy.

Trump spoke with the New York Times reporters David Sanger and Maggie Habermann on the telephone for over 90 minutes and on “virtually every question they asked he was clearly vamping like a 12 year old giving the book report on a book he hadn’t read, as Parton writes. Trump’s idea to fix everything is to put a gun to the whole world’s head and “demand they pay up or the U.S. will let the world burn.”

Trump thinks of world affairs the same way he thinks of women. It’s all about whether they’ve been “friendly” to him (will have sex). Asked if he would be willing to lend humanitarian aid he said:

You know, to help I would be, depending on where and who and what. And, you know, again — generally speaking — I’d have to see the country; I’d have to see what’s going on in the region and you just cannot have a blanket. The one blanket you could say is, “protection of our country.” That’s the one blanket. After that it depends on the country, the region, how friendly they’ve been toward us. You have countries that haven’t been friendly to us that we’re protecting.

Trump likes women too! He’s “So, so good to women!” Trump loves them if they love him back.

Trump’s (real or faked) delusions of grandeur are on full display during the 2016 election cycle. And this was made clear by a Washington Post interview. The Washington Post (March 22, 2016) published the entire transcript of a meeting between its editorial board and Republican presidential candidate, word-for-word. It was terrifying to read, scary as much for what was there as for what wasn’t.

The answers were never about policy or state-craft as we understand these concepts and always reverted to Trump’s performance as he played the part of The Great Man. Trump as an outsized-SELF was the only subject.

WP: This is about Isis. You would not use a tactical nuclear weapon against Isis?

Trump: I’ll tell you one thing, this is a very good-looking group of people here. Could I just go around so I know who the hell I’m talking to?…

…Here’s my hands. Now I have my hands, I hear, on the New Yorker, a picture of my hands … A hand with little fingers coming out of a stem. Like, little. Look at my hands. They’re fine. Nobody other than Graydon Carter years ago used to use that. My hands are normal hands. During a debate, he [Marco Rubio] was losing, and he said, “Oh, he has small hands and therefore, you know what that means.” This was not me. This was Rubio that said, “He has small hands and you know what that means.” OK? So, he started it. So, what I said a couple of days later … and what happened is I was on line shaking hands with supporters, and one of supporters got up and he said: “Mr. Trump, you have strong hands. You have good-sized hands.” And then another one would say: “You have great hands, Mr. Trump, I had no idea.” I said: “What do you mean?” He said: “I thought you were like deformed, and I thought you had small hands.” I had 50 people … Is that a correct statement? I mean people were writing: “How are Mr. Trump’s hands?” My hands are fine. You know, my hands are normal. Slightly large, actually. In fact, I buy a slightly smaller than large glove, OK? No, but I did this because everybody was saying to me: “Oh, your hands are very nice. They are normal.”

If he rambled like the quote, and was your teen you’d seek professional help for your obviously disturbed child. Like a bad child, when he can’t think of an answer Trump just claims he doesn’t want other countries to know about his secret plans… to get even with people who say he has small hands… to talk about his body, or all the women who love him, and how much more sex he gets than all those losers…

… then reverts to talking about his body, and how great he is, or someone else’s body.

Even Ann Coulter has had it with Trump. That takes so doing!

Ann Coulter –Donald Trump’s most vocal backer, called him the only hope for “the last genuinely Christian country on earth.”

But after the pig with a hairdo took a  swipe at the looks of rival Ted Cruz’s wife, Heidi, Coulter has suddenly had it. She publicly chided him for behaving like a “mental” 16-year-old.

Maybe she just figured out Trump is a women-hater, a crude jock itch of a man.

As the Daily Beast reported:

Donald Trump introduced his presidential campaign to the world with a slur against Mexican immigrants, accusing them of being “rapists” and bringing crime into the country.

“I mean somebody’s doing it!… Who’s doing the raping?” Donald Trump said, when asked to defend his characterization.

It was an unfortunate turn of phrase for Trump—in more ways than one. Not only does the current front-runner for the Republican presidential nomination have a history of controversial remarks about sexual assault, but as it turns out, his ex-wife Ivana Trump once used “rape” to describe an incident between them in 1989. She later said she felt “violated” by the experience.

Michael Cohen, special counsel at The Trump Organization, defended his boss, saying, “You’re talking about the front-runner for the GOP, presidential candidate, as well as a private individual who never raped anybody. And, of course, understand that by the very definition, you can’t rape your spouse.”

“It is true,” Cohen added. “You cannot rape your spouse. And there’s very clear case law.”

Ivana Trump’s assertion of “rape” came in a deposition—part of the early ’90s divorce case between the Trumps, and revealed in the 1993 book Lost Tycoon: The Many Lives of Donald J. Trump.

The book, by former Texas Monthly and Newsweek reporter Harry Hurt III, described a harrowing scene. After a painful scalp reduction surgery to remove a bald spot, Donald Trump confronted his then-wife, who had previously used the same plastic surgeon.

“Your fucking doctor has ruined me!” Trump cried.

What followed was a “violent assault,” according to Lost Tycoon. Donald held back Ivana’s arms and began to pull out fistfuls of hair from her scalp, as if to mirror the pain he felt from his own operation. He tore off her clothes and unzipped his pants…

Way to go Franklin Graham! Do you agree you “can’t rape a spouse?”

Graham posted this on his FB page:

President Barack Obama is heralding his nuclear deal with Iran as “another chapter in the pursuit of a more helpful and more hopeful world.” I don’t think so. Iran has a history of funding terrorism around the world, and they are Israel’s worst enemy. We are alienating our decades-long allies and cozying up to their enemies and ours. And Donald J. Trump was exactly right when he said, “we have four prisoners over there. We should have said ‘Let the prisoners out.'” One of these prisoners is our friend Pastor Saeed Abedini, and I haven’t heard the names of any of these four U.S. citizens mentioned in the negotiations with Iran. Some are calling this deal a potential death sentence for the State of Israel. Pray for our Congress that God would give them wisdom as they debate this important agreement. There’s a lot at stake here.

Secretary of State John Kerry said on “Face the Nation” on Sunday:

Everywhere I go, every leader I meet, they ask about what is happening in America. They cannot believe it. I think it is fair to say that they’re shocked. They don’t know where it’s taking the United States of America. It upsets people’s sense of equilibrium about our steadiness, about our reliability. And to some degree, I must say to you, some of the questions, the way they are posed to me, it’s clear to me that what’s happening is an embarrassment to our country.

But no such luck with Trump’s legion of evangelical supporters like Graham and Falwell, looking more like followers of Trump than of Jesus every day. Go figure. (BTW, yes, if a wife says “no” then that is rape.)

Our Conversation with Death
Everyone who lives is called to be in conversation with Life and...
view all News and Politics blogs
What Are Your Thoughts?leave a comment
Copyright 2008-2020, Patheos. All rights reserved.