Trump to Republicans: The only thing we have to fear is people who won’t buy into perpetual fear

Trump to Republicans: The only thing we have to fear is people who won’t buy into perpetual fear July 19, 2016 Frank Schaeffer 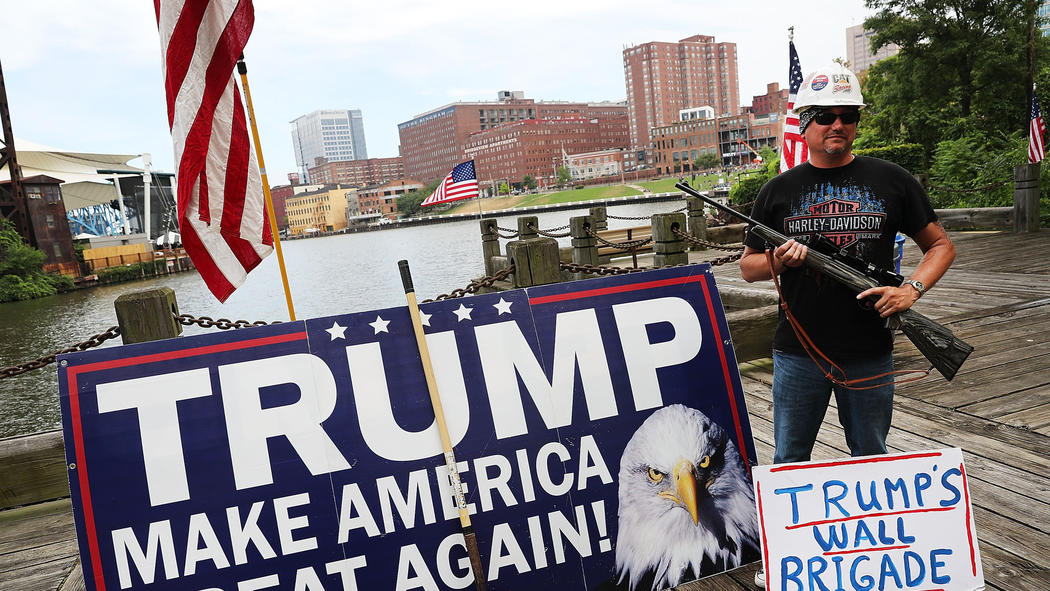 The Republican Party/NRA/Trump attempt at a coup against American values of bravery, hope and fearlessness (see Kennedy, Reagan, Lincoln et al) is now a white supremacist cult of death. Period. As was made abundantly clear on the first day of their bizarre “convention” all they have to offer is fear as their “answer” to how to motivate voters.

They offer a lose/lose proposition to America: violence and fear of violence, guns and more guns, war and more war.

The Trumped-up GOP is the mirror image of ISIS: Guns, killing, revenge, race hatred, delusion, paranoia, fundamentalist religion (Pence is the No 1 US evangelical/fundamentalist political homophobic actor) and a personality cult that rivals Jim Jones’s.

Instead of an Imam the angry white and aging mob of the uninformed and the cowardly and afraid follow Donald. Yes, they are cowards, these open-carry “males” afraid of their own shadow. Crime is down, violent crime on strangers most of all. Who but a coward carries a gun in a mostly peaceful democratic and (for whites that is) safe country? If not cowards, then just silly bullies that want to see fear in the eyes of other Americans as they play with their guns that and/or just mean.

Like Wahhabism’s harsh “Islam,” Trump’s GOP is a bomb-everyone gun cult where the only “vision” is of a “pure” whites-only race of gun owners defending themselves against all “infidels” (other races and beliefs). They are still waiting for the most reasonable and brightest man to have been in the the White House in decades (Obama) to attack them. They are waiting for the end of America– as the US stock market and employment rates hit record highs. They root for American decline as actually America looks like a better and better bet with each passing day, to everyone that is but to FOX “News” watchers.

Fiction for facts. No climate change but Benghazi dominates… speakers call for Hillary to be jailed… but for cops who murder black men to be welcomed as heroes, black lives matter is demonized in a race-baiting session not seen since Trump said Obama wasn’t really an American, while the same people who insist that cops get killed because of black lives matter ALSO insist it is everyone’s  right to buy cop-killing armor-piercing ammunition… Rudy rages… cheers resound for the cops in Freddie Gray’s death… nothing is missing except for calls to throw gays from building tops, stone adulterers (Trump excepted of course!) and overthrow the Federal Government… with guns, if that is they should ever make you bake a cake for a gay couple…

Fear of Mexicans. Fear of Muslims. Fear of the Black Lives Matter. The GOP is an extremist party of fear, the sort of fear of tolerance and modernity, inclusion and reaching out that drives some Muslims to join ISIS, under Trump both rooting for terror and causing it. Who can doubt that Trump’s letting the speech of naked race hate out of the bag has not also upped the ante in the cop-v-blacks murders, and murderous reactions?

“The vast majority of Americans don’t feel safe,” claimed former New York mayor Rudy Giuliani, who said there had been five major Islamist terrorist attacks on the US and its allies in the past seven months. He didn’t mention the 50,000 gun deaths. But he’s right about us not feeling safe in places like Texas where open carry has reduced our “civilization” to being at the mercy of not not terribly bright paranoids– not to mention cop-killers be they white militia men or angry black males.

The TRUMP-NRA-GOP agenda is flooding America with cop-killing guns and stoking paranoid hatred of the “other. ” So Rudy how could we feel safe?

What does the GOP offer America? Fear more fear and only fear. Oh and then there’s just plain old stupidity of the kind that all cheats, frauds and liars fall into eventually. The mess that is Trump’s brain and his sense of invulnerability as a rich brat, came into full view Monday night when he carelessly sent Melania Trump out with a plagiarized speech taken from first lady Michelle Obama’s of several years before. Trump’s excuse? Blame Hillary, of course! “Once again, this is an example of when a woman threatens Hillary Clinton, she seeks to demean her and take her down,” Campaign Manager Paul Manafort told CNN Tuesday morning.

Strange, America — our NRA gun cult aside — is actually in good shape compared to the rest of the world. That’s a fact accepted everywhere that is, but in the brains of the GOP leaders and their deluded followers.

Thus the GOP is now a party of mass hysteria.

relax (and VOTE!) Trump will lose.

You see, racism openly packaged as fear and cowardice doesn’t fly with the majority of the American people. That’s because most of us actually love our country and think it’s pretty damn great right now, so great in fact that some idiot even recently suggested building a wall to keep the millions of people who look to us for hope, out. Because while the GOP circle the wagons for a last stand against people of color, the rest of the world would like to live here.

That’s because (unlike the Republicans and Trump) the rest of the world loves and admires America. They’d give anything to live here with we the fortunate few, mostly because most of us seem able to get along pretty well.

July 16, 2016
The key bulwark of faith-based Trumpism is the prosperity gospel: To the evangelicals (both right and left) lying and money are the real "gospel" so "He's one of us!"
Next Post

July 20, 2016 WATCH THIS! Give me 30 min and I'll show you what an educated, prepared WOMAN & political leader looks like! Compare to Trump! Theresa May speaking today during her 1st Prime Ministers Questions at the House of Commons WATCH!
Recent Comments
0 | Leave a Comment
"Except that Rapture is not mentioned anywhere in the Bible, or in any other source ..."
Starsatyr Tim LaHaye is dead but his ..."
"Good article, but I believe a tad outdated now 4 years later. While the Moral ..."
Kirk Leavens An open letter to the Republican ..."
"Praying deconverted me. So yes, Christians, keep praying."
Captain Cassidy Evangelical and/or Post-Evangelical Christianity, “Progressive” or ..."
"ALL Christians voted for President Trump. On NOV 8 2016 the choice was do you ..."
Dry Loop The Case For Impeachment Grows
Browse Our Archives
get the latest from
News and Politics
Sign up for our newsletter
POPULAR AT PATHEOS News and Politics
1