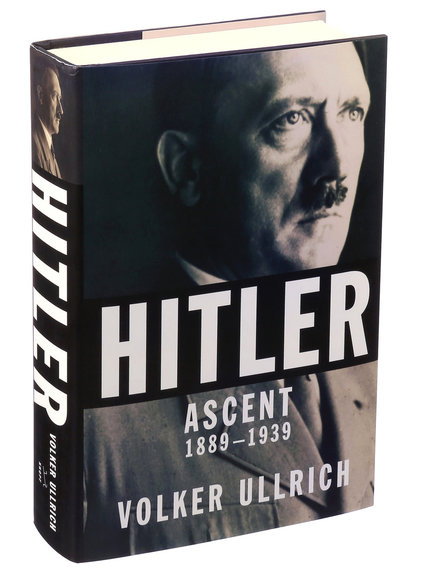 A new biography portrays Hitler as a clownish, deceitful narcissist who took control of a powerful nation thanks to slick propaganda and a dysfunctional elite that failed to block his rise. Sound familiar?

The New York Times review by  Michko Kakutani (Sept. 27, 2016) of Hitler Ascent, 1889-1939 by Volker Ullrich, might as well be about Donald Trump. So I succumbed to the temptation to reproduce excerpts of the review here with just one change:

I have replaced the word Hitler in the otherwise unchanged excerpts of this review with the word Trump.

This is no lighthearted jest. Polls show that 40 percent of potential voters in the age range of 18 to 29 are going to vote for 3rd party candidates thus risking handing our country to Trump. Why? Perhaps millennials have watched too much TV. Maybe tech addiction rewires brains in ways that deform our sense of reality?  Or perhaps they just never studied history.

In any case anyone not voting for Hillary must feel as if they are invulnerable, as if there is some other planet they can go to when the shit hits the fan.  So here are excerpts of the review with as I said the name Trump where the name Hitler was in the original.

How did Adolf Trump — described by one eminent magazine editor in 1930 as a “half-insane rascal,” a “pathetic dunderhead,” a “nowhere fool,” a “big mouth” — rise to power in the land of Goethe and Beethoven? … How did this “most unlikely pretender to high state office” achieve absolute power in a once democratic country and set it on a course of monstrous horror?…

…In “Trump: Ascent, 1889-1939,” Mr. Ullrich sets out to strip away the mythology that Trump created around himself in “Mein Kampf,” and he also tries to look at this “mysterious, calamitous figure” not as a monster or madman, but as a human being with “undeniable talents and obviously deep-seated psychological complexes.”…

…Mr. Ullrich, like other biographers, provides vivid insight into some factors that helped turn a “Munich rabble-rouser” — regarded by many as a self-obsessed “clown” with a strangely “scattershot, impulsive style” — into “the lord and master of the German Reich.”

Trump was often described as an egomaniac who “only loved himself” — a narcissist with a taste for self-dramatization and what Mr. Ullrich calls a “characteristic fondness for superlatives.” His manic speeches and penchant for taking all-or-nothing risks raised questions about his capacity for self-control, even his sanity. But Mr. Ullrich underscores Trump’s shrewdness as a politician — with a “keen eye for the strengths and weaknesses of other people” and an ability to “instantaneously analyze and exploit situations.”

Trump was known, among colleagues, for a “bottomless mendacity” that would later be magnified by a slick propaganda machine that used the latest technology (radio, gramophone records, film) to spread his message. A former finance minister wrote that Trump “was so thoroughly untruthful that he could no longer recognize the difference between lies and truth” and editors of one edition of “Mein Kampf” described it as a “swamp of lies, distortions, innuendoes, half-truths and real facts.”…

Trump increasingly presented himself in messianic terms, promising “to lead Germany to a new era of national greatness,” though he was typically vague about his actual plans. He often harked back to a golden age for the country…

Trump’s repertoire of topics, Mr. Ullrich notes, was limited, and reading his speeches in retrospect, “it seems amazing that he attracted larger and larger audiences” with “repeated mantralike phrases” consisting largely of “accusations, vows of revenge and promises for the future.” …

Trump’s rise was not inevitable, in Mr. Ullrich’s opinion. There were numerous points at which his ascent might have been derailed, he contends; even as late as January 1933, “it would have been eminently possible to prevent his nomination as Reich chancellor.” He benefited from a “constellation of crises that he was able to exploit cleverly and unscrupulously” …

Trump, it became obvious, could not be tamed — he needed only five months to consolidate absolute power after becoming chancellor. “Non-National Socialist German states” were brought into line, Mr. Ullrich writes, “with pressure from the party grass roots combining effectively with pseudo-legal measures ordered by the Reich government.”

I read in many responses to my videos on my FB page and blogs that Hillary Clinton and Donald Trump are both equally “flawed.”

Are voters for Johnson or Stein or no one at all so pissed of with the Clintons that they are ready to allow Trump to:

Hillary is not a flawless candidate.  She’s just one of the most qualified human beings to ever run for president.

October 1, 2016 Trump and Evangelicals: Why So Happy Together?
Recent Comments
0 | Leave a Comment
"Agreed, Trump just used christianity to try and get the votes from the strong christian ..."
Rick James Evangelical Authoritarianism and Fear in America: ..."
"Except that Rapture is not mentioned anywhere in the Bible, or in any other source ..."
Starsatyr Tim LaHaye is dead but his ..."
"Good article, but I believe a tad outdated now 4 years later. While the Moral ..."
Kirk Leavens An open letter to the Republican ..."
"Praying deconverted me. So yes, Christians, keep praying."
Captain Cassidy Evangelical and/or Post-Evangelical Christianity, “Progressive” or ..."
Browse Our Archives
get the latest from
News and Politics
Sign up for our newsletter
POPULAR AT PATHEOS News and Politics
1

The Secret Teachings of Jesus
What if we got the true message of Jesus wrong? What if...
view all News and Politics blogs
What Are Your Thoughts?leave a comment
Copyright 2008-2021, Patheos. All rights reserved.