My childhood was filled with unusual characters, all products of my father’s fertile imagination. A Freudian would probably say that each was a projection of a different aspect of my father’s personality—all I know is that their appearances were both unpredictable and entertaining. The “Flying Gynzbyrd,” for instance, was a heavy bird who liked to land with a thud on the breakfast table and stomp through either my brother’s or my toast, leaving imprints the size of the tips of my dad’s index and third finger. The “Claw” was a dangerous creature who liked to be petted but would fly into a rage and attach himself without warning to your face or the top of your head if you rubbed him just slightly the wrong way.

My favorite was “Pet Crow.” He was, I’m sure, a projection of my father’s affectionate and emotional side, a part of his personality that was not frequently on display in traditional forms. 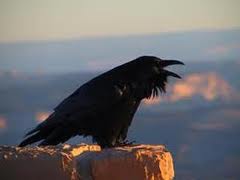 Pet Crow loved to sit on my shoulder, then work his way farther and farther into the crook of my neck between my clavicle and my jaw in a ticklish way that sent me into spasms of hilarity.

I included these childhood companions and several new creatures in my own parenting repertoire; I found that gynzbyrds, claws, crows, Thursday Turkey, and Friday Frog were far more successful in getting my sons up for school than yelling “get your asses out of bed NOW!” Crows are an ongoing fascination. When we moved to Providence eighteen years ago, I noticed in short order that the urban crows on our street were unusually large and noticeably louder than other crows in my experience (Pet Crow, for instance, was entirely silent).

I also noticed that I never saw more than three crows at a time, so I came to the obviously logical conclusion that they were the only crows. I named them Edgar, Allen, and Poe, after the E.A.P. of “The Raven” fame who had a strong Providence connection. Jeanne once asked me how I could tell them apart—I told her that if we saw just one, it was Edgar, just two were Edgar and Allen, with Poe making it a threesome every once in a while. Jeanne, used to these sorts of insights on my part, never questioned my story. She bought me a painting a few years ago of a crow striding down a path with large galoshes-style boots on, which hangs proudly by the door in my office. It’s a very dependable conversation starter.

Not everyone is as willing to embrace my crow logic as Jeanne is. Upon seeing two crows on campus once while walking to lunch with some colleagues, I said “Hi, Edgar and Allen.” Asked for an explanation, I filled my colleagues in on my insight that there are only three crows. After an uncomfortable silence, a theology professor said tentatively “Uh, Vance, I think there are more than three crows in the world.” I responded “When have you ever seen more than three crows in one spot?” Of course, he couldn’t think of such a time. To which I responded “Q.E.D.” I wonder why I haven’t been assigned to teach logic recently. One time a while ago my smartass son and I saw what appeared to the untrained eye to be four identical crows on a lawn. My son said “So much for your three-crow theory, Dad.” To which I responded, “That’s Edgar, Allen, Poe, and a raven.”

In his later years, my Pennsylvanian-born-turned-Westerner father became interested in various Native American myths and traditions, particularly the idea that certain animals and birds have a special spiritual significance. He claimed for a while that the raven was his totemic bird, which is not a surprise since ravens make occasional appearances in the Bible, including the Noah and Elijah stories. After hearing over the phone yet another of his stories about his latest brilliant insight being confirmed by a mystical raven circling overhead, I asked Dad one day “what’s the difference between a raven and a really big crow”? After a few moments of silence, he honestly admitted “none, I guess.” The next time I heard him say anything about totemic birds, his was now the golden eagle. I think he believed his spiritual stature was a bit more exalted than could be handled by a mere crow. Raven, yes, but not a crow.

I don’t know, though—there’s something special about crows. In one of Aesop’s fables, a very thirsty crow comes across a pitcher containing a small amount of water. When the crow put its beak into the mouth of the pitcher, he found that he could not reach far enough down to get at the water. He tried and tried, but at last had to give up in despair. Then he had an Archimedes-like “Eureka!” moment about the physics of water displacement. He picked up a nearby pebble in his beak and dropped it in the pitcher. Then he dropped another pebble in the pitcher. And another one. And another one. After several hundred pebbles or more, the displaced water rose high enough in the pitcher for him to quench his thirst.

In my experience, the Holy Spirit is very much like Aesop’s crow. For years I felt that I was in a spiritual desert, and considered the liquid faith poured into my pitcher as a child as long gone—good riddance. But as it turned out, the best of that liquid remained, hidden and unattended at the bottom. The Holy Spirit had been dropping pebbles and drips of water into my pitcher over my whole lifetime—an experience here, a word there, a book someplace else, a person—without my even being aware. All of the spiritually confusing years were actually years of pebbles collecting, one by one, in my pitcher. During a sabbatical ten years ago, one of my colleagues said  “you’re not the same person you were when you came here.” She was right—I had been dry, but now I not only was wet, but was getting wetter all the time. 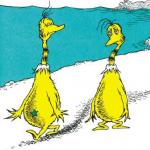 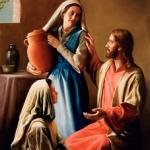