God Said It. I Believe It. That Settles It–Best of “Bearings Online” #4

God Said It. I Believe It. That Settles It–Best of “Bearings Online” #4 December 30, 2017 vancemorgan

I occasionally write articles for Bearings Online, the online publication of the Collegeville Institute for Ecumenical and Cultural Research in Collegeville, MN–I spent a transformative sabbatical semester there in Spring 2009. I received word yesterday that two of my articles are included in their “Top Ten Articles of 2017” list (I wrote three for them in 2017)!

This article, published last November, came in at #4.  It is an exploration of how Protestant fundamentalism has influenced how Americans read and interpret “sacred” texts from the Bible to the U.S. Constitution. Enjoy! 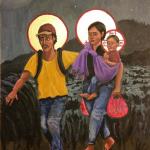 December 31, 2017 He Has Put Down the Mighty . . .
Recent Comments
0 | Leave a Comment
Browse Our Archives
get the latest from
Freelance Christianity
Sign up for our newsletter
Books by This Author Books by Vance G. Morgan