Last Thursday was the Feast of the Holy Innocents, the liturgical day that commemorates King Herod’s ordering the slaughter of the male children under two years old in Bethlehem in an attempt to eliminate the newborn Messiah who was rumored to have been born there. I have written about this gruesome part of the New Testament narrative before, focusing on the text from the haunting medieval “Coventry Carol”:

Herod the king, in his raging,

Charged he hath this day.

All young children to slay.

We Are Not Alone

I ended that essay by writing that “In the darkest depths of despair, the promise is that God is with us, choosing to become part of the mess and transform it from within rather than impose solutions from the outside.  . . . The baby in a manger, as well as the dead babies in the streets of Bethlehem, call us to embrace hope when things are darkest. We are not alone.” But on social media last Thursday, a rather different discussion broke out both on Twitter and Facebook.

Only a visit from an angel in a dream warning Joseph of Herod’s violent plans saved the life of the infant Jesus. The Holy Family fled in the middle of the night heading for Egypt, where they stayed until word came that Herod had died and it was safe to return home. Understandably, a number of people pointed out that fleeing to a strange land from violence in their homeland made Joseph, Mary, and Jesus refugees just as millions of displaced persons are today. Yet another way, along with their poverty and lack of any sort of importance and status, that the Holy Family embodied the divine’s preference for the poor and disenfranchised over the rich and mighty.

But many on social media pushed back against this obvious connection, splitting definitional hairs in a vigorous attempt to prove that Joseph, Mary, and Jesus were not refugees. The more these arguments developed, the more it became clear why these people did not want to consider the Holy Family as refugees. 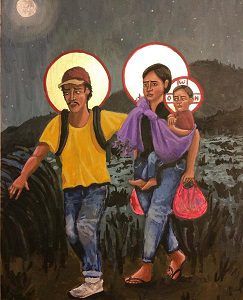 they did, then they might have to pay closer attention to and show more concern and care for the twenty-first century refugees that our current administration and its supporters would like to bar from entering this country. Since no God-fearing American or Christian (these often seem to be synonymous in the minds of many) would refuse support and aid to the Holy Family, and since such support and aid is being refused on principle to contemporary refugees, the Holy Family must not have been refugees. QED. Sigh.

Just the last in a seemingly endless string of events that cause me to want to bang my head on the closest desk. It never lets up. The week before Christmas, for (another) example, was a tough one for people concerned about “the least among us,” as the Republican tax bill was rushed through Congress and signed into law. The writing had been on the wall for a while, as even those Republican senators who had caused me to have hope for conservative elected officials during failed attempts to repeal Obamacare made deals, then supported this bill just in time to give the 1% and corporations a lovely Christmas gift—the middle class and the poorest among us got coal in their stockings.

Social media was full of all sorts of comments, of course; my favorite was this on Rev. William Barber’s Twitter feed:

To see Speaker Ryan so giddy about cutting taxes for the wealthy while hurting the poor & sick—calling this a historic day—is like watching a doctor being happy that he’s about to intentionally do the wrong operation on a patient he claims to love. @Rev Dr. Barber

As a friend from my youth used to say, “True that.”

Then on the very day that the U.S. Congress finished approving of the tax bill, on Twitter I came across one of the most striking brief summaries of the mystery and the power of the season that I have ever read:

As thousands of soldiers marched through the great cities of the Empire, shouting “Hail, Caesar!”, God’s emissary bowed before a peasant girl in an obscure village and whispered “Hail, Mary.” “He has put down the mighty from their thrones and lifted up the lowly; he has filled the hungry with good things, and sent the rich away empty (Luke 1:52)”

It took my breath away and put tears in my eyes. To whom were the divine incarnational plans first revealed? To the lowliest of the low. Not just to a poor person in an unimportant village in the eastern backwater of the Roman empire, but to a woman in a patriarchical culture. A mere girl. A nobody.

We spend so much time finding ways to establish ranks of importance and status that it is easy to miss the simple and radical truth woven through the seminal stories of the Christian faith. God doesn’t care about status, rank, honor, or power. God apparently values just about nothing that human beings naturally consider to be most important.

On this final day of 2017, we would all do well to step back and reconsider our values, both individually and collectively. For how long will we fail to address the needs of those who are least among us? For how long will we pretend that our faith is compatible with business as usual and the status quo? For how long will we look away from the holy families among us, the twenty-first century refugees and downtrodden who are, literally, the image of the divine? Will we ever fill the hungry with good things, and send the rich away empty? 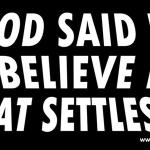 The Quest for Rest: Sabbath as Resistance
Last week, Olympic gymnast Simone Biles was (and continues to be) disparaged...
view all Progressive Christian blogs
What Are Your Thoughts?leave a comment
Copyright 2008-2021, Patheos. All rights reserved.