Hitler, Trump, and the Golden Calf

In one of my seminars a week or so ago, my students and I considered the following passage from a text assigned for the day.

[He] had seen nothing of the world and had acquired neither knowledge nor understanding of it . . . [He] preferred to have people of the same origins as himself in his immediate entourage; no doubt he felt most at ease among them . . . His illusions and wish-dreams were a direct outgrowth of his unrealistic mode of working and thinking. [He] actually knew nothing about his enemies and even refused to use the information that was available to him. Instead, he trusted his inspirations, no matter how inherently contradictory they might be; his inspirations were governed by extreme contempt for and underestimation of others.

Who is this passage describing? You would be justified in guessing that it is a description of former President Donald J. Trump, perhaps from one of the tell-all insider books that have been already written, or that will follow in the wake of his time in office. An entourage of sycophants, a deliberate ignorance about the basics of the office he occupied, contempt for anyone who disagreed with him, a delusional belief in the accuracy of his knee-jerk reactions . . . all of these were on daily display during Trump’s time in the Oval Office. 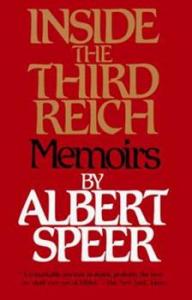 This is not, however, a description of the former guy. This passage is a first-hand description of Adolf Hitler from Albert Speer’s Inside the Third Reich, a memoir written by Speer during his twenty-year imprisonment in Spandau prison after his conviction for war crimes and crimes against humanity at the Nuremburg Trials in 1946. Published in 1969, Speer’s memoir provides a detailed immersion into the world of Hitler and the Nazis, including an intimate portrayal of Hitler himself.

Speer, who was first Hitler’s architect, then his Minister of Armaments once World War II broke out, was perhaps the closest thing to a “friend” that Hitler had. Reflecting back on his relationship with Hitler, Speer often shows remorse for his involvement with and facilitation of some of the worst Nazi policies, frequently suggesting that “if I had known then what I know now, I would have acted differently” in an attempt to explain and at least partially excuse himself. Such remorse is undoubtedly the main reason why Speer escaped the death penalty that the Nuremburg tribunal passed down to many of Speer’s fellow Nazi war criminals. Whether one is convinced by Speer’s mea culpas or not, this description of his relationship with Hitler is telling: “One seldom recognizes the devil when he is putting his hand on your shoulder.”

A teaching colleague and I use Inside the Third Reich as a central text in our colloquium “Grace, Truth, and Freedom in the Nazi Era,” a course that we are currently teaching for the fifth time in the last eight years. We use the text early in the semester, along with several others, to establish that Hitler and those in the Nazi hierarchy were neither monsters, evil aliens from Mars, nor demons from the depths of hell. They were human beings just as we all are, with histories, strengths, faults, successes and failures. It is only when we cease vilifying them and recognize ourselves in them that we can begin to understand what the Grim Reaper says about human beings in Marcus Zusek’s novel The Book Thief:

I am constantly overestimating and underestimating the human race—but rarely do I ever simply estimate it. How can the same thing could be so ugly and so glorious, and its words and stories so damning and brilliant? . . . I am haunted by humans . . . The contradictory human being. So much good, so much evil. Just add water.

We ought not to hide from ourselves that Nazi Germany is a mirror for all of us. What looks to us so hideous is our own features, but magnified.

In both their preparatory writing assignments before seminar, as well as in class, my students grappled with both the preconceptions about Hitler and the Nazis that they had brought into the semester, as well as with what they had learned over the first month of the semester. Two or three of them are psychology majors; they found the tools they were learning to use in their psych classes to be valuable when seeking to understand both Hitler and Speer. “Hitler strikes me as a sad person,” one student remarked. “He’s insecure, has no real friends, is not really up to the task of leading millions of people, and yet he has an uncanny ability to get people to follow him anywhere . . . even into a World War.”

Many of my students addressed the “elephant in the room” in their written work; fewer of them were brave enough to identify the elephant in seminar: What we’re studying is uncomfortably familiar. We’ve just been through this, and it isn’t over yet. There are parallels between the rise of Hitler and the past four or five years in our country. One student remarked that the only difference between Germany then and the United States now is that we have a few more guardrails built into our political and legal system than the young and fragile Weimar Republic did in the 1920s and early 1930s. Our guardrails have held—barely. Theirs didn’t. And it’s not a certainty that ours will the next time.

I promised myself after the inauguration of Joe Biden and Kamala Harris that I would never write about Donald Trump in this blog again (even though having Trump’s name in the title of any post has generally guaranteed good traffic numbers). Been there, done that, never again. I didn’t want to write this blog post. But two things convinced me otherwise over the past week. The first was studying Inside the Third Reich with my students. The second was observing various reports on the annual meeting of the CPAC (Conservative Political Action Conference) in Orlando this past weekend.

I watched none of the CPAC events, but could not avoid a visual that, as the saying goes, is worth a thousand words.

The star of the first day of CPAC was a larger-than-life golden statue of Trump, wearing a suit coat, a red tie, red-white-and-blue shorts, sandals, and holding a magic wand in his left hand. Not surprisingly, comparisons to the Golden Calf from the book of Exodus immediately popped up on Twitter. “Idol worship is not conservative,” tweeted Rep. Adam Kinzinger (R-IL), one of ten House Republicans who voted to impeach Trump for inciting the January 6th insurrection at the Capital. Other tweets included

Clever? Yes. Funny? Only in the sense that “If I didn’t laugh, I’d cry.” Because the one constant that connects Adolf Hitler, Donald Trump, and the Golden Calf from Exodus is a glaring and dangerous fact about human beings. There’s a reason why the first commandment is a prohibition against graven images—human beings are incurable idolaters.

Over and over again, we find out that we are capable of turning anything—an idea, a nation, a perception of God, a person—into an idol. Idolatry gives us the opportunity to remove ourselves from the challenging realm of moral analysis, of distinguishing  between right and wrong. Whatever the idol says or stands for is right—no matter what. And anyone who opposes the idol is not only wrong, but also is morally evil and hence disposable—no matter what. There were many motivators behind the January 6th insurrection at the Capitol. None of those motivators was stronger than idolatry.

I’m a hard core optimist by nature; I’d love to be able to say that we have emerged from the era of Trump bruised but intact. But the one of the lessons of Hitler, Trump, and the Golden Calf is that as long as human beings are human beings, it’s never over. We can, and do, turn anything or anyone into an idol. And when that happens, all bets are off. As the Grim Reaper reminds us, we have the capacity to be both ugly and glorious. Often at the same time.

March 4, 2021 Praying with Alexa
Recent Comments
0 | Leave a Comment
"I'm always intimidated by comments that are longer than my original essay."
Vance Morgan Don’t Put Jesus Back in the ..."
"The Easter Story has traditionally included supernatural miracles and religious meanings. For most Christians, Jesus ..."
John Frederick Noack Don’t Put Jesus Back in the ..."
"agreed."
Brandon Roberts Faith and Doubt Go Hand in ..."
"One of my favourite quotes:Certainty is vastly overrated and is frequently dangerous, especially when claimed ..."
Lost Explorer Why Doubt Is My Favorite Virtue
Browse Our Archives
get the latest from
Freelance Christianity
Sign up for our newsletter
POPULAR AT PATHEOS Progressive Christian
1