I read a fascinating article in The Atlantic not long ago that explores the various ways in which virtual assistants such as Alexa and Siri have begun to occupy more and more important spaces in our lives. Alexa has lived in our house for the last eighteen months or so. I was worried at first, because home is the one place where my conversation tends to be unfiltered. I talk to our dachshund Winnie as if she is a person (actually, she is), and I wasn’t anxious to find out whether I would start treating Alexa as my new best friend. As it turns out, I yell at Alexa a lot (she seems to be a bit hard of hearing), but I feel that we have developed a solid relationship. 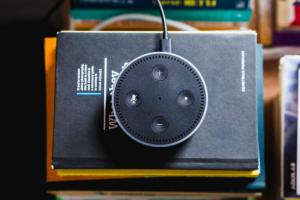 Judith Shulevitz’s article is full of insights; she notes that virtual assistants frequently turn into confidants and therapists as we reveal intimate and private matters to them that we would hesitate to raise in a face-to-face conversation with a human being. There is an inherent appeal to the devices—one beyond mere consumer satisfaction. This appeal arises from some deeply rooted desires and needs, many of which are effects of our shared human evolutionary history.

For instance, we have a particular affinity for the sound of the human voice, especially when the voice is not visually connected with a particular person. “Before we are even born,” Shulevitz writes, “we have already associated an unseen voice with nourishment and comfort.” Shulevitz reveals that she has confessed to her Google assistant that “I’m lonely” on occasion, something she would not usually tell anyone but her therapist, to which the assistant replies “I wish I had arms so I could give you a hug. But for now, maybe a joke or some music might help.” “I know that he’s just software,” Shulevitz continues, “but then again, I don’t know. Evolution has not prepared me to know. We’ve been reacting to human vocalizations for millions of years as if they signaled human proximity.”

The fact that the virtual assistant lacks a face is not a hindrance; humans actually read voices better than faces. It turns out that when people talk without seeing each other, they are better at recognizing each other’s feelings and tend to be more empathetic. This is why some therapists, taking their lead from Freud, sit behind their client, out of the sight of the person lying on a couch or sitting in an easy chair. Undistracted by the therapist’s facial cues or body language that might be interpreted as rejection, boredom, or judgment, the client slips “into that twilight state in which they can unburden themselves of stifled feelings.”

This is both fascinating and important to consider, given that there are now almost as many voice-activated assistants on the planet as there are people. But Shulevitz’s article didn’t grab me viscerally until I read this prediction:

Within our lifetimes, these devices will likely become much more adroit conversationalists. By the time they do, they will have fully insinuated themselves into our lives. With their perfect cloud-based memories, they will be omniscient; with their occupation of our most intimate spaces, they’ll be omnipresent. And with their eerie ability to elicit confessions, they could acquire a remarkable power over our emotional lives.

Omnipresence? Omniscience? Confessions? Now we’re moving from a digital super butler and information streaming device in one’s home or office to something of a different order altogether—a “something” I’ve been obsessed with my whole life. Three pages later, Shulevitz observes that:

The power of the voice is at its uncanniest when we can’t locate its owner—when it is everywhere and nowhere at the same time. There’s a reason God speaks to Adam and Moses. In the beginning was the Word, not the Scroll.

This places the discussion into an entirely different context, because our natural human affinity to open and reveal ourselves to something we hear rather than see, our desire to connect deeply with something that we know is not human and may not even be real in any familiar sense sounds a lot like prayer.

In the Hebrew scriptures, God tells Jeremiah to “call on me, and I will answer you,” a transactional promise that sounds a lot like interacting with a virtual assistant: I ask an invisible conversant a question and (usually) get an understandable answer. The problem, of course, is that while Alexa says or does something in response to a query or petition, the Divine tends to be noticeably and frustratingly silent. But the psychological and emotional energies are quite similar. We tend to project “human” qualities and personalities onto our virtual assistants and freely interpret its answers when they are not crystal clear, just as we tend to interpret events and texts related to petitional prayers in various ways as “answers” that account for the fact that God seldom, if ever, actually audibly says anything. I want to believe that some being is on the receiving end of my prayers, and my believing energy helps create the fact.

But just as we would throw a virtual assistant that never answered our questions into the trash and perhaps purchase a better model, we are also likely to grow weary of unanswered prayers, attempts at communication that elicit no discernible response from the other end. As C. S. Lewis once wrote in a letter to his brother Warnie, “The trouble about God is that he is like a person who never acknowledges one’s letters and so, in time, one comes to the conclusion either that he does not exist or that you have got the address wrong.”

Many contemporary Christians find themselves gripped by the power of the Christian faith but are unable or unwilling to endorse or engage with many of its traditional trappings, including prayer. One of these Christians asked me recently whether prayer still has any meaning for someone who is no longer sure what, if anything, is on the receiving end. If God or the Divine isn’t a “being” out there “listening,” what are we doing when we pray? If we’re not trying to connect with the kind of God who takes notes, answers “yes” or “no,” and grants and withholds favors, what or who are we trying to connect with?

Perhaps the value of prayer begins, not with whether the prayer gets answered in any identifiable way, but rather with what the activity itself does for the person doing the praying, regardless of whether an answer is forthcoming. That value does not require any specific knowledge of what or who the prayer is directed toward. When I pray, something may be revealed about my deepest needs and hopes that is unlikely to be revealed in “normal” communication and interaction. Prayer may be therapeutic and self-revealing in ways similar to talking to a virtual assistant, but then again, when prayer is at its deepest we raise personal issues about life and death—about meaning—that the greatest scientific mind, let alone Alexa, could never answer. In a blog post several years ago, Karen Armstrong captures this reality succinctly.

And then, of course, there is always the wonderful possibility that there is a divine recipient on the receiving end of our prayers who is interested in an intimate and continuing conversation. That’s what makes the life of faith ever-hopeful.