Is Israel in the West? and other questions from the classroom

Is Israel in the West? and other questions from the classroom May 17, 2018 vancemorgan

Swirling around the dedication of the new United States embassy in Jerusalem this week have been political, social, and religious issues that are both definitive and complex beyond imagination. Many of the matters raised require us to think long and hard about how we define ourselves and each other. Which happens to be precisely one of the important matters in a course that I teach regularly. This week’s event could have been the organizing idea for a syllabus in that course.

The heart of Providence College’s core curriculum is the Development of Western Civilization (DWC) program, a sixteen-credit, four-semester, interdisciplinary and team-taught series of courses required of all freshmen and sophomores regardless of major. From its origin in the 1970s, DWC (or “Civ,” as many call it) has been both a regular source of pride and occasionally of controversy, both of which have been the case in recent years.

I have taught in the program for eighteen of the twenty-three years I have taught at the college and directed the program for the four academic years before my 2015-16 sabbatical. At the end of August on the first day of the Fall 2016 semester–my first day back in the classroom in fifteen months, and just over two months before the 2016 Presidential election–my colleagues and I chose to spend our first ninety minutes with our new freshman students by raising the question that many of them were probably thinking but were too afraid to ask: Why study Western civilization at all? 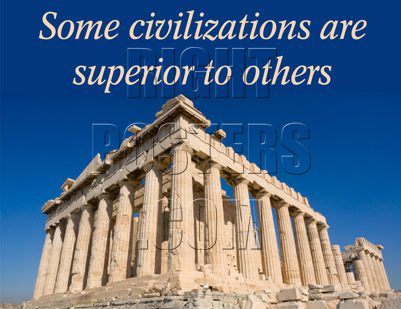 The very existence of a program such as ours is controversial in many quarters. Many wonder, in an increasingly diverse and globally connected world, whether the study of “dead white guys” is anything more than a lame and outdated exercise in cheerleading for white folks. But others seek to defend the primacy of Western civilization over all others. One of my colleagues began the class with a clip from the Republican National Convention a couple of months earlier. A talking head panel was filling up air space waiting for the first speaker of the evening. After one person mentioned that the hall was filled with lots of angry white people, Iowa Congressman Steve King took offense.

King: This “old, white people’ business does get a little tired. I’d ask you to go back through history and figure out, where are these contributions that have been made by these other categories of people that you’re talking about — where did any other subgroup of people contribute more to civilization?”

King’s comments astounded a couple of people on the panel and outraged a third—as the table exploded into shouting, the moderator wisely broke for a commercial.

The congressman’s comments reminded me of something that had been brought to my attention a few weeks earlier. A person who gave a talk at my college over fifteen years ago remembered it in a recent column on a conservative website, recalling that some of the people present were not happy with the content of his talk.

I am sure I noted the fact that some cultures are better than others and I might well have quoted (with enthusiastic approval if I did) William Henry’s observation, in his book In Defense of Elitism, that “It is scarcely the same thing to put a man on the moon as to put a bone in your nose.” I am very fond of Henry’s native proboscis image, not least because, like Saul Bellow’s question: “Who is the Tolstoy of the Zulus?”, it is so reliably productive of rage among pampered left-wing academics.

These comments could have been written or said by some of my colleagues on campus who often defend the existence of our DWC program by asking “Why wouldn’t we want to focus close-to-exclusive attention on Western Civilization? It’s the best civilization ever!”

After Congressman King’s clip from the RNC, my teaching colleagues began a conversation with our students by asking basic questions such as “What is Western Civilization?” The students seemed unsure how to answer other than to say “we are!” After a few minutes I made my first contribution. “This is going to sound like a stupid question,” I said, “but I’m sitting over here listening to all of you talk about ‘Western Civilization’ and I’m wondering: West of what? Are we talking geography here? What is Western Civilization west of?”

None of us had thought to load a map onto PowerPoint, so I just asked the students to picture Europe, Asia, and Africa in their imaginations. “If we draw a dotted line from north to south to divide the East from the West, where would we draw it?” 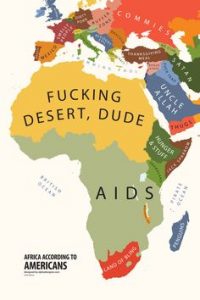 The first suggestion was that we should draw it in such a way that would perhaps include Israel in the West but place the rest of the Middle East in the East. “What about Turkey?” one of my colleagues asked. They weren’t sure. If course if the dotted line continues straight south from Israel, another question arises. “What about Africa? Is it in the West?” I asked.

Remembering Congressman King’s inclusion of the United States in Western civilization (even though it does not make an appearance in DWC until the beginning of sophomore year), the dotted line should cross the Atlantic so that the U.S. and Canada lie on the Europe (northern) side of the line. Mexico and Central America? Iffy. South America? Not sure. It was pretty clear that the line was intended to include those most like us in the West and exclude everyone else.

This exercise established pretty quickly that the answer to West of What? cannot be geographical. One student then helpfully suggested that “I think ‘Western’ refers to various ideas rather than geographical areas.” Asked for examples, students suggested things like democracy, human rights, capitalism, and monotheism. One of my colleagues, a theologian, jumped on that one. “Is Christianity a Western religion?’ he asked—“Of course!” was the answer (Congressman King would have been proud). “What about Judaism?” The students weren’t as sure there, even when my colleague pointed out that both Christianity and Judaism started in the same place and that Jesus was a Jew.

“What about Islam?” Most of the students thought not (Donald Trump would have been proud), prompting my colleague to point out that for a number of centuries during the Middle Ages the westernmost area of Europe—Spain—was Muslim. Trying to define “Western” by religion doesn’t work much better than by geography.

Finally, one brave student said “I think that ‘Western’ for most people means pretty much the same thing as ‘White’.” And I suspect there’s a great deal of truth in that suggestion. When we study Western Civilization, we will undoubtedly end up studying predominantly dead white guys unless a concerted effort is made to engage with non-Western influences.

I mentioned to the students, for instance, most people don’t know that one of the greatest—perhaps the greatest—philosopher in the Western tradition, Plato, was heavily influenced by thought from Persia and India. The dotted line is porous, in other words. Furthermore, one of my colleagues who is of Italian ancestry pointed out that one hundred years ago in this country, immigrants from southern European countries such as Greece and Italy were not considered by many in this country as white.

After ninety or so minutes of this, I’m sure our students left the lecture hall largely in confusion. And that’s a good thing. Despite the name of the course, “Western Civilization,” upon close scrutiny, turns out to be as much a reflection of our expectations and prejudices as anything else. This is good for seventeen- and eighteen-year-old young adults to understand at the outset of their forays into their college education. We live in a polarized political and social climate in which labels and categories are used as if they are as objective and set in stone as the Ten Commandments. Only when we realize that all such dividing lines are at their roots random, porous, and fluid might we seize the opportunity to do better.