One of my unexpected reading delights in the past few years has been discovering the writings of Anne Lamott. In her struggles with faith, she is equally intense in both her relentless pursuit of the transcendent and her irreverence. In Bird by Bird, she writes that “the mind frequently has its head up its own ass—seeing things in such a narrow and darkly narcissistic way that it presents a colorectal theology, offering hope to no one.” The phrase truly inspires a picture worth more than a thousand words. I don’t mean to just pick on theologians, though; there’s plenty of colorectal philosophy, too. A Jesuit priest who was one of my professors and mentors during graduate school days once described logical positivism, 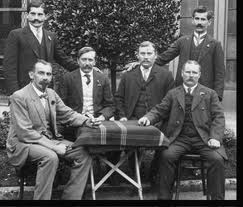 My sense of humor tends toward non-sequiturs, irony, sarcasm, and (especially) irreverence. My comic heroes include Monty Python, The Three Stooges, just about everyone in The Blues Brothers, Jon Stewart on The Daily Show, and Gary Larson; 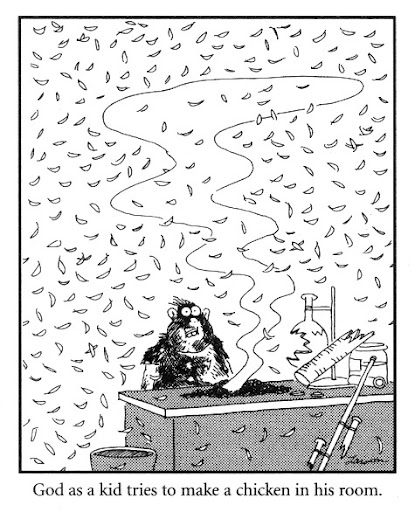 I’ve frequently told my students that the day Larson stopped writing The Far Side  was one of the darkest days in the history of Western Civilization; Stewart’s retirement from The Daily Show rivals it in darkness. Given that academics tend to take themselves FAR more seriously than any group of human beings ever should, hardly a day goes by at work without my having the opportunity to be irreverent. Nietzsche (a very funny guy) wrote that “the noble soul has reverence for itself.” My response is that the healthy soul has reverence for very little.

Humor is one of the best antidotes to an overly serious and somber attitude toward things religious and spiritual. I learned this, amazingly enough, from my Baptist minister father whose sense of humor I inherited. 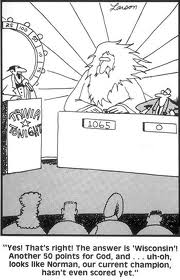 He was always quick to shine an irreverent light on religious smugness and pomposity, although I most often saw his humor in action in the privacy of our home. There’s very little humor in the Bible; Jesus is not reported as ever even smiling (let alone laughing), so far as I’m aware. I wrote recently about a great novel in which two characters have an ongoing debate about whether Jesus ever laughed:

But we only get a cardboard cutout Jesus in scripture—to see him as a man, I think some irreverent thoughts. Given that we human beings are flawed, imperfect, and funny to our toes but have perfectionist delusions, irreverence is a universal humanizer.

I like to imagine Jesus and his entourage sitting around a campfire telling off-color jokes, or the disciples having a farting and belching contest. It’s a given that each of the disciples had some peccadillo or personal habit that everyone else laughed at and made fun of. Jesus nicknamed James and John the “sons of thunder”—they were flying off the handle and getting inappropriately pissed all the time. Some laid back disciple (maybe Thaddeus—we never hear about him) was always playing practical jokes on them just to piss them off.

Philip was a klutz, Bartholomew was a slob. Andrew snorted when he laughed like Jeanne does, causing everyone else to crack up (as she does). Matthew wrote “Kick Me” on the back of Peter’s robe. Someone in the group (probably Judas) was always trying to get out of paying his share at a restaurant. Everyone was always attempting to get Thomas to believe something without saying “I doubt it” first.

Can’t you just see Jesus mocking and imitating the Pharisees’ tones of voice and mannerisms when they weren’t looking? Talk about irreverent—this guy made vats of wine for his first miracle, ate meals with the riff-raff of the day, and popped balloons of self-righteousness every time he saw them. I’ll bet he set people up just so he could do it. If there wasn’t a lot of smiling and laughing going on, the Jesus caravan  wouldn’t have hung together for so long. Son of God or not, he still had to put his robe on the same way as everyone else.

If God doesn’t have a sense of humor, we are in big trouble (or I am, at least). I admit that there’s a lot about divine wrath and judgment in scripture and the tradition, but enough already. I take comfort in one of the few references to laughter in the Bible. Heavenly strangers visit Abraham and tell him that he, at 100 years old, and Sarah, a 90-year-old spring chicken, will have a son within a year.

Now the two of them have been trying for a long time (70-75 years) with no luck. Sarah, on the other side of the tent flap, laughs at the news—well to be fair, the KJV says she “laughed within herself.” It was probably one of those “yeah, right” or “whatever” sniffs or smirks. But her “within herself” laugh was outside herself sufficiently that the visitors hear it and call her on it. And then she lies and says she didn’t laugh. At this point the perceptive reader says

“Oh Geez—you’re in trouble now. Aren’t you aware, Sarah, that in the very next chapter your niece-in-law Lot’s wife is going to get turned into a pillar of salt for just looking in the wrong direction?”

But Sarah isn’t divinely fried, or turned into a warthog, or a pepper shaker. After a brief “no I didn’t,” “yes you did” exchange with the divine visitors, Sarah leaves and Abraham starts bargaining with them over the fate of Sodom and Gomorrah. But three chapters later, sure enough Sarah’s and Abraham’s son is born. And they call him Isaac—“laughter.” He’s grain of sand number one in the great nation that has been promised to Abraham which will number as the “sands of the seashore.” If Lot’s wife had laughed first, then looked, she would have been fine.

April 4, 2016 Old White Guys
Recent Comments
10 Comments | Leave a Comment
Browse Our Archives
get the latest from
Freelance Christianity
Sign up for our newsletter
POPULAR AT PATHEOS Progressive Christian
1