A Facebook friend, who has helped the traffic on this blog increase exponentially over the past few weeks by sharing my posts on various Facebook pages that she administers, challenged me in a Facebook message the other day:

If you don’t already have your topics set for the next week, I’d love to see something that addresses the effect that this election time is having on relationships—family and friends—and, maybe how to move through and past it . . . to “healing.”

I responded that my posts for the coming week were written and scheduled, but I would take a shot at something shortly after the election. It has turned out to be one of the most challenging posts to write of the hundreds I’ve posted here over the past four-plus years, for reasons I’ll describe below. 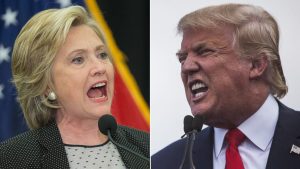 But it strikes me that it is worthwhile for all of us to think today—the day before the election that will (hopefully) put an end to one of the nastiest and most divisive Presidential campaigns in American history (certainly in my lifetime)—about how we will move forward after tomorrow. Regardless of the result in tomorrow’s presidential vote, more than forty percent of those who voted will believe that voters have made a horrible mistake, our country is swirling its way down the drain, and life as we have known it will not continue. But believe it or not, no matter who is elected President tomorrow, the apocalypse will not be triggered, Wednesday will dawn, and we will have to figure out what to do next. Good luck to us.

The philosophy department on my campus, of which I have been a member for twenty-two years (and which I chaired from 2004-08), has over the past two or three years earned a college-wide reputation for being one of the most dysfunctional departments on campus (only one or two other departments are serious competitors with my department for the title). Three weeks ago our dysfunction was on full display in an important meeting—without revealing confidential matters, I have told various people since then that the fault lines at the meeting were so deep that something like the following was regularly on display, at least by some colleagues: 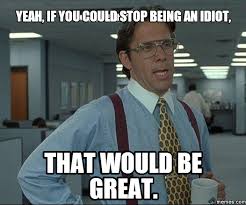 “If you don’t agree with me, then you either didn’t take the time to become aware of the facts, you are stupid, or you are immoral.” No fourth option, such as “we have all done our homework, are familiar with the facts, have made a principled decision, and we just happen to disagree,” seemed to be available. I am always dismayed by such “discussions,” believing that the prohibited fourth option often happens to be the truth. But in thinking about that meeting, I’ve come to realize that when it comes to the almost-completed Presidential campaign, I have often found myself thinking of those persons likely to vote for the major candidate other than the one I will vote for tomorrow in precisely the same ways as were on display at the recent department meeting: If you vote for that “other person,” you must either be ignorant, a moron, or dangerously lacking in moral principles.

I doubt that I am alone in having effectively constructed a political echo chamber over the past several months in which I hear only voices that I want to hear. I only listen to radio and television stations likely to lean toward my own political and social beliefs and commitments. When such stations, in the interest of “balance,” include voices from the other side of things, I mute the machine or turn it off. When my candidate is having a good week or the opponent is not, I’ve been known to watch or listen to 2-3 straight hours of talking heads on my preferred stations. But when my candidate has a bad week or stumbles in some way, 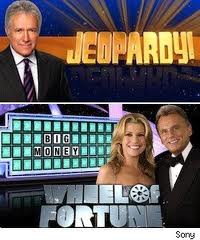 I would rather watch “Wheel of Fortune” and “Jeopardy” than news analysis. My 650+ Facebook acquaintances have been carefully culled on several occasions to weed out persons who might have the audacity to post materials and arguments supporting the other side. It’s not just that I don’t want to hear arguments intended to challenge my own—I know that such arguments are out there and I reject them out of hand. It’s also that listening to more than a minute or so of representatives of that other candidate’s perspectives literally starts making me ill. I am one of those people who has said that if my candidate’s opponent wins, we’re moving to Canada. Enough of this shit.

I should know better than this. The other day in my General Ethics class, I reminded my students of a passage from an interview that was part of the day’s assignment. Toward the end of the interview, the interviewee said that “A sense of responsibility about one’s beliefs, a willingness to defend them if challenged, and a willingness to listen to the reasons given by others is one of the guiding ideals of a civil society.” The interview focused on the often fraught dynamic between atheism and theism, but the interviewee’s comments have direct application to our lives as citizens of a democracy. As we discussed the interview and accompanying article, I reminded my students that when someone presents an argument whose conclusion is something you disagree with strongly, the proper response is not “that person is an idiot,” or, slightly more charitably but just as illogically, 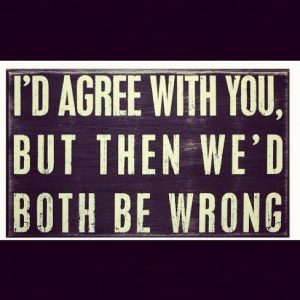 “I disagree, therefore that person is wrong.” In philosophy, you have to earn the right to have an opinion, I often tell my students—and earning the right to an opinion involves careful reasoning, argumentation, and above all cultivating the ability to listen, even to those with whom you disagree most strongly. But I, along with just about everyone else during our current political cycle, have been doing none of this. Consequently, we no longer have a civil society.

No matter how things turn out tomorrow, the apocalypse will not happen, the sun will rise on Wednesday morning entirely oblivious to what happened on Tuesday, and we will all be faced with a huge question: Now what? Forget the ruptures in our national fabric; for many Americans, the problems are personal. This election has divided friends and families in ways that might seem impossible to repair. 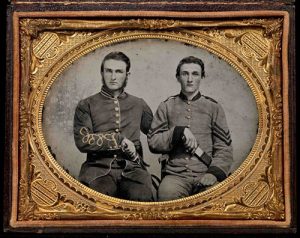 I heard someone the other day liken the problem to members of the same family fighting on opposite sides during the Civil War a century and a half ago. That’s an extreme comparison, but it is difficult to imagine these divisions healing with the simple passage of time. Truth be told, I’m not sure that I’m ready to do my part in helping with that healing. I don’t even want to imagine the feeling in my house if our candidate does not win tomorrow. If our candidate does win, self-satisfaction and relief may well overwhelm concerns about healing for a while. But there will be life after Tuesday–and I do have a recent personal example of how people with very different convictions can coexist in peace and love.

Earlier this year, Jeanne and I had the opportunity to spend some time with my cousins and their families for the first time in many years. They know us to be dedicated liberals and we know them to be committed conservatives— 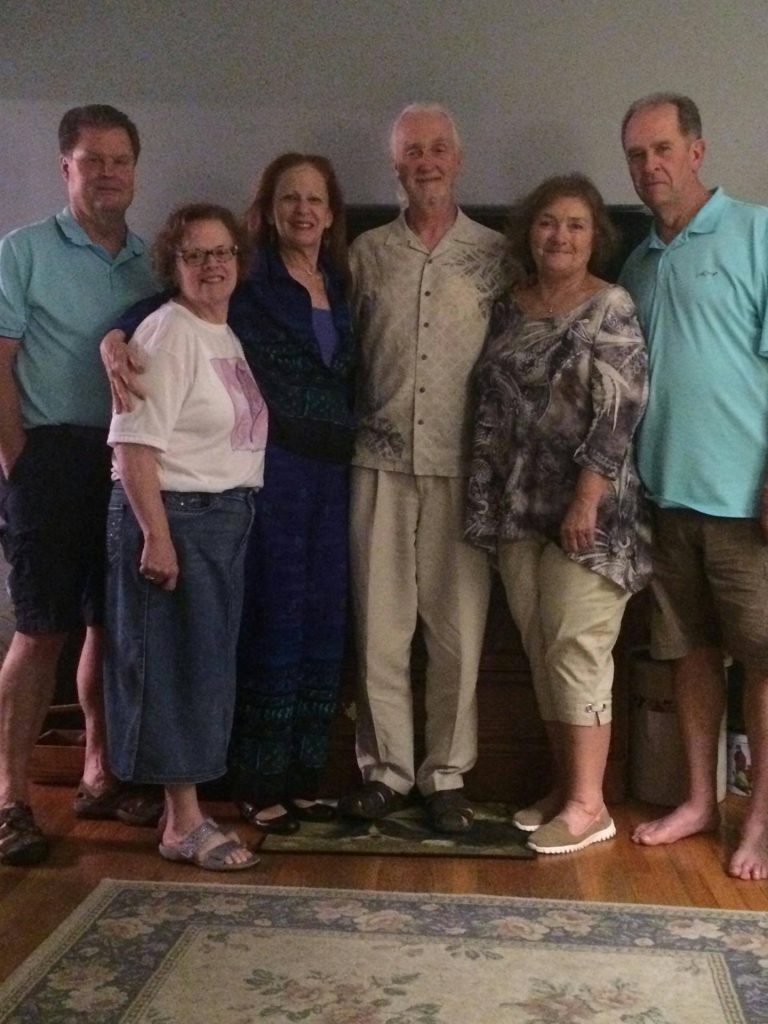 these differences spread across social policies, politics, and religion. Yet a wonderful time was had by all, and nary a discouraging or inflammatory word was heard.When we left to head for home, as he helped me put our luggage in the car my cousin said, “This is amazing—you’re a liberal, I’m a conservative, and yet we haven’t argued once.” We gave each other virtual high-fives over that amazing development. How did we manage to spend several evenings together without spouting incompatible talking points? Not simply by avoiding minefield conversations by talking about the weather and sports (although we did talk about both of those on occasion). We had a wonderful time because we continually sought out what we share in common—histories, faith, pets, kids, and more. We shared decades of stories, many of which were new to some of those present, talked about common interests, and were reminded that what truly connects human beings together is far more important, with the long-term in view, than what divides us.

I need—we all need—to remember this as we look forward to our shared lives past Tuesday. Don’t define people by what they post on social media.

Don’t assume you know anything about someone simply because you discover that they do not share all of your most important beliefs. Don’t get me wrong—this is going to be very difficult for all of us. It’s not as if the issues that have divided our country so sharply are unimportant; they are crucially important. But even more crucially important is our shared humanity and the fact that we all must find ways to share our nation, our communities, our circle of friends, and our families while believing very differently on issues that matter. Perhaps a good place to start is to replace the time spent on social media and listening to radio or television analysis with spending time in the company of real human beings. We might be amazed to discover how much we share in common.

November 11, 2016 As Good As We Make Them
Recent Comments
5 Comments | Leave a Comment
Browse Our Archives
get the latest from
Freelance Christianity
Sign up for our newsletter
POPULAR AT PATHEOS Progressive Christian
1

7 Reasons the Bible is NOT...
All Set Free
Books by This Author Books by Vance G. Morgan