Today is the last Sunday before Lent, a Sunday which, in the liturgical calendar, is always Transfiguration Sunday. Included in all three of the synoptic gospels, Jesus’ transfiguration is a strange story multiple layers of possible meaning. Jesus is worn out by the crowds and takes his best buddies, Peter, James, and John, with him to the top of a mountain for a break. While there, he is transfigured with Elijah and Moses, looking like a great laundry detergent ad. Matthew’ gospel this morning tells us that “His clothes became dazzling white,” while Mark adds in his gospel that they were “whiter than anyone in the world could bleach them.” Peter blurts out, “Let us put up three dwellings—one for you, one for Moses and one for Elijah.” 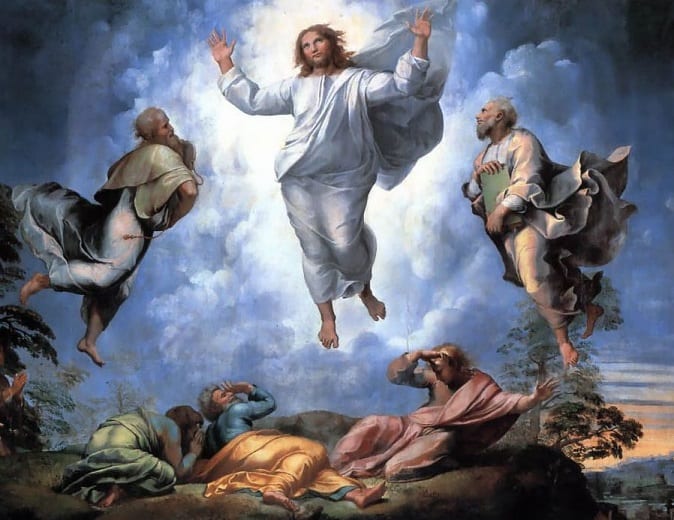 Why does he make such a random suggestion? Luke tells us—“He did not know what he was saying.” Far be it from Peter to say nothing when he doesn’t know what to say, to look and attend to what’s going on in silence and awe, or simply to say “Whoa!” or “Holy shit!” or “Who does your laundry?” No, he has to nail it down, organize it, put walls around it, and either sell tickets or write up a doctrinal statement and confession of faith. The voice from heaven makes it clear what Peter should be doing: This is my Son, the Beloved; with him I am well pleased; listen to him!

Almost every Sunday during the months I spent on sabbatical a decade ago in Minnesota, I saw a canine in church. Her name was Caritas, and she was a service dog for a regular parishioner who was profoundly deaf. The woman sat at the end of the front row so she could read the lips of the celebrant, while Caritas laid next to her, usually with her back half hanging out into the aisle. The dog looked as if she would love to have a pat on the head or a belly rub, but I knew better—don’t mess with a service dog while she’s on the clock. But just in case I, or anyone else within range, happened to have a hard time resisting the dog-lover’s urge to touch every dog, Caritas was more in-your-face than most service dogs. She wore a vest that, on its back, said “Service dog on duty. Do not pet.”

Look—don’t touch. This used to be my mother’s automatic command every time we walked into a store of any sort, from grocery to hardware to department. Every parent worth the job description has this directive in her or his repertoire, knowing that pre-civilized human beings are inveterate grabbers. Hannah Arendt once wrote: “Every year the world is invaded by millions of tiny barbarians—they’re called children.”

Absolutely true, and “Look, don’t touch” is one of the earliest and best tools to use for domestication purposes. In truth, though, the temptation to look and grab, rather than simply to look, is one that none of us ever truly overcomes. As soon as we see something, we want to possess it, to make it ours, to wrap it up in what Iris Murdoch calls “the avaricious tentacles of the self.” That’s what Peter is seeking to do with what he doesn’t understand in the transfiguration story, when what he should be doing is looking, listening, and keeping his mouth shut.

Scripture makes it clear that there is a time to look and a time to touch—and don’t confuse the two. In II Samuel, the newly crowned King David leads the army of Israel against the Philistines and recaptures the Ark of the Covenant. They place the Ark on an oxen-drawn cart and head back to Jerusalem in a parade complete with singing and musical instruments, led by David dancing in his underwear. The oxen step in a pothole and stumble, the Ark starts tipping off of the cart, and some poor guy named Uzzah makes the horrible mistake of assuming that he should put his hand on the Ark to steady it, because maybe God would just as soon not see the Ark lying on its side in the mud.

God strikes Uzzah dead on the spot for his efforts. “Look, don’t touch.” I’ve always thought that God’s treatment of Uzzah was a grossly disproportionate response and completely unfair, but as Jeanne would say, “it is what it is.” And in John 20, the resurrected Jesus says to Mary Magdalene “Touch me not,” exactly what Caritas’ vest would have said if she spoke in King James English.

As a native New Englander, one of my all-time favorite stories is Nathaniel Hawthorne’s “The Great Stone Face.” It’s the story of a boy named Ernest who lives in a New Hampshire valley; on the perpendicular side of a nearby mountain hang some immense rocks which, when viewed from the proper angle and distance, “precisely resembled the features of a human countenance.” The valley is Franconia Notch in the middle of the White Mountains, only forty miles or so from where I grew up,; “The old man of the mountain,” as we called it, was a regular point of destination for my family. I was crushed when I learned a number of years ago that, despite the best preservation efforts, the old man finally fell off the mountain. 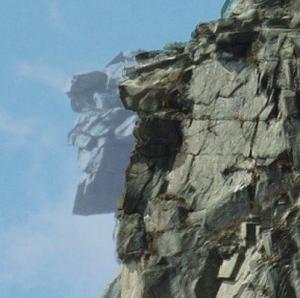 According to Hawthorne’s story, there is a legend in the valley that someday “a child should be born hereabouts, who is destined to become the greatest and noblest personage of his time, and whose countenance, in manhood, should bear an exact resemblance to the Great Stone Face.” Ernest, who gazes daily with love and awe at the Great Stone Face, spends his whole life as a simple laborer in the valley. Occasionally a rumor would arise that the man resembling the Great Stone Face had appeared in town, but each candidate—a wealthy miser, a vain general, a pompous politician—turned out to be a fraud. As the years pass and Ernest becomes an old man, he is loved by his neighbors and family but sadly concludes that the legend will not come true in his lifetime.

Then one day as he talks simply and clearly on his front porch with a number of his friends about matters important to all of them, the setting sun strikes Ernest’s face and someone sitting next to him exclaims “Behold! Behold! Ernest is himself the likeness of the Great Stone Face!” He had become what he had spent his life lovingly looking at.

Iris Murdoch tells us that “man is a creature who makes pictures of himself and then comes to resemble the picture.” And the pictures we make will be fashioned from what we are looking at and what we see most clearly. In the book of Numbers, in response to yet another round of blatant disobedience, God sends snakes into the midst of the children of Israel; many of those bitten by the venomous serpents die.

In response to the people’s recognition of their rebellion and penitence, God instructs Moses to make a serpent of bronze and lift it up on a pole for everyone to see. “And so it was, if a serpent had bitten anyone, when he looked at the bronze serpent, he lived.” Simone Weil comments: “To look and to eat are two different things. The only people who have any hope of salvation are those who occasionally stop and look for a time, instead of eating. Looking is what saves us.” What are you looking at?

February 20, 2020
Professional Wrestling and the Liberal Agenda
Next Post

February 24, 2020 A Lenten Reflection: The Difference Between Solitude and Being Alone
Recent Comments
0 | Leave a Comment
Browse Our Archives
Follow Us!

God is a Question. What is the Answer?
In my General Ethics course, we just completed a unit called “Does...
view all Progressive Christian blogs
What Are Your Thoughts?leave a comment
Copyright 2008-2020, Patheos. All rights reserved.