Stupidity On Display: Where do we go from here?

Stupidity On Display: Where do we go from here? January 17, 2021 vancemorgan

As the nation continues to process and seek to understand the seditious riot and occupation of the U. S. Capitol on January 6th, we continue to be shocked by the overwhelming amount of video footage that continues to be released. Among the many striking images are numerous Christian symbols (crosses, flags, signs, banners) interspersed with all manner of conservative political and social symbols carried and worn by people bent on violence, chaos, and mayhem. Last Tuesday, the New York Times published an article by Elizabeth Dias and Ruth Graham entitled “How White Evangelical Christians Fused With Trump Extremism.” Here’s how the lengthy article begins:

Before self-proclaimed members of the far-right group the Proud Boys marched toward the U.S. Capitol on Wednesday, they stopped to kneel in the street and prayed in the name of Jesus. 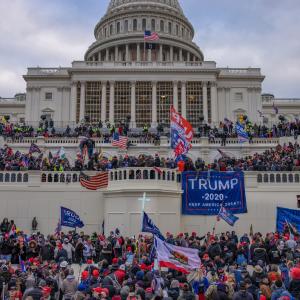 After praying for “reformation and revival” and giving thanks for “the wonderful nation we’ve all been blessed to be in,” they asked for the “courage and strength to both represent you and represent our culture well,” seeking divine protection for what was to follow.

Then they rose. Their leader declared into a bullhorn that the media must “get the hell out of my way.” And then they moved toward the Capitol.

How could this happen? Regular readers of this blog know that I have frequently asked that question in various essays over the past few years. How have the most extreme corners of support for Donald Trump have become inextricable from some parts of white Christian evangelical power in America? In order to get a fresh perspective on a difficult problem, sometimes it is helpful to seek out historical parallels. Why do intelligent people believe lies that are easily exposed as lies? Why do intelligent people treat facts as disposable opinions? It happened in 1930s and 40s Germany in one of the most cultured, civilized, and educated nations in Europe.

Dietrich Bonhoeffer is one of the figures we will be studying in “’Love Never Fails’: Grace, Truth, and Freedom in the Nazi Era,” an interdisciplinary colloquium that I will be teaching with a colleague from the history department this coming semester. “Ten Years After” is an essay that Bonhoeffer wrote for colleagues and friends in 1942; in it, he reflects on various aspects of the past decade in Germany as he and others had, in various ways, resisted the rise and entrenchment of the Nazis.

Less than year after writing this essay, Bonhoeffer was arrested by the Nazis for his involvement in a plot to assassinate Adolf Hitler, for which he was executed in 1945, just weeks before the end of World War Two. “Ten Years After” is comparable to Martin Luther King, Jr.’s “Letter from Birmingham Jail” as a document addressing the specific challenges of their times by speaking to greater issues, including the human capacity for decency, courage, and engagement in the midst of political cultures that fail to honor integrity and these values. How is one to think beyond self-interest and toward the common good in challenging times?

We have all experienced more examples of this dynamic in the past four years, even in the past ten days, than could possibly be documented.. When millions of citizens are uninterested in fact-checking lies or changing their minds in the face of new evidence, stupidity reigns. And as Bonhoeffer notes, we misjudge the situation when we dismiss such believing persons with condescending pejoratives—persons with PhDs and people with no formal education are equally susceptible to stupidity as Bonhoeffer defines it. How can this be?

In our current political climate, stupidity ranges across the spectrum from the most obsessed MAGA-hat-wearing rioter to the most avid AOC supporter. Whether in support of or in opposition to any particular agenda or political figure, stupidity always dehumanizes, replacing thought and deliberation with soundbites and memes. Bonhoeffer’s diagnosis seventy-five years ago could have been written this morning.

So, what is to be done? Bonhoeffer expresses his prescription for stupidity in religious terms: “The internal liberation of human beings to live the responsible life before God is the only genuine way to overcome stupidity.” This is not a call for everyone to become a person of faith, though; from a prison cell a couple of years later, Bonhoeffer will write that God wants people of faith to live as if God does not exist. Bonhoeffer’s call is for people to take responsibility for who and what they are, rather than turning this responsibility over to others in exchange for perceived power or solidarity.

January 19, 2021 Can You Be a Christian Capitalist? Can You Be a Capitalist Christian?
Recent Comments
0 | Leave a Comment
"The same way creationists would haveTheyd be dead"
KDNDLKJ Noah and his Children: Bad New ..."
"I wonder how YOU would have adapted to the aftereffects of a 6 mile wide ..."
Plcc07777 Noah and his Children: Bad New ..."
"That would be me. We were asked in a church liturgy group once to tell ..."
jekylldoc Why Jesus was Obsessed with Outsiders
"This is the second time in a week that I have heard stories about the ..."
jekylldoc I’m not trying to fix you. ..."
Browse Our Archives
get the latest updates from
Freelance Christianity
and the Patheos
Progressive Christian
Channel
POPULAR AT PATHEOS Progressive Christian
1