The Christian Faith in One Sentence

The Christian Faith in One Sentence July 12, 2020 vancemorgan

This morning I have the privilege of giving the sermon at Trinity Episcopal Church in Pawtuxet, RI (outside, wearing masks and properly distanced, of course). This is what I will be saying.

When it comes to social media, I limit myself to Facebook and Twitter. Twitter is mostly for sports (and the occasional snarky political comment), while Facebook is for blog traffic, staying connected with family, and making new friends (mostly through my blog). But I do send my blog out on Twitter as well (usually to the sound of crickets chirping); a few weeks ago a fellow traveler and I connected and now follow each other. The other day, she tweeted a challenge: “Sum up the Bible in one sentence.”

That, of course, is a tall order—so I’ll make your assignment a little bit easier this morning. Summarize the Christian faith in one sentence. If you tried to summarize the heart of Christianity in one sentence, what would it say? Be thinking about that throughout the sermon—I’ll be providing a possible answer at the end. But we have a few stops to make along the way.

I’m always interested in anything referencing Scandinavia, since thanks to my mother I am 38% Swedish and 10% Norwegian (according to Ancestry.com, at least). Jeanne and I would like to visit Scotland’s Shetland islands the next time we head for Europe (hopefully next summer); these islands are actually closer to Norway than they are to Scotland proper, so maybe for the first time I’ll actually set foot in the land of my roots. 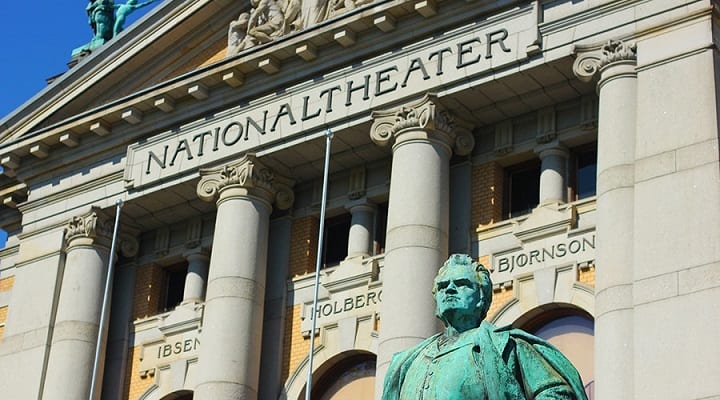 In the 19th century, Norway produced the great composer Edvard Grieg as well as one of the most important playwrights in the Western tradition, Henrik Ibsen. A few years ago, Jeanne and I saw a performance of Ibsen’s Hedda Gabler at the Gamm theater, when it was still in Pawtucket. As I waited for the curtain to rise, I read the following story in the program notes. “There is a famous anecdote about an out-of-town performance of the original production of A Streetcar Named Desire. Thornton Wilder was in attendance and remarked afterwards to Tennessee Williams that he thought Blanche DuBois, the main character in Williams’ masterpiece, was too complex a character for the theater. Tennessee is said to have replied, ‘People are complex, Thorn.’”

And so is Hedda Gabler. The program notes also mentioned that the role of Hedda has been described as the “female Hamlet,” so my expectations were high. I probably had read Hedda Gabler as an undergraduate, but this was the first time I had the chance to see it on stage and only the second Ibsen play I had ever seen performed (A Doll’s House many years ago was the other).

What I know about Ibsen has been gathered over the years from teaching in a team-taught course where my literature teammate has occasionally chosen one of Ibsen’s controversial and fascinating plays for the students to grapple with, ranging from An Enemy of the People to The Wild Duck and A Doll’s House. Ibsen’s penchant for ripping the veil off late nineteenth-century bourgeois Norwegian society, pushing his readers’ and audience’s face up against topics that decent people would just as soon not consider, and especially his willingness to populate his plays with female characters who explode the stereotypes of dutiful wife and devoted mother, caused his plays to be banned in several countries during his lifetime (he was nicknamed “Ibscene”), but make them sound to a twenty-first century audience as if they were written yesterday.

Ibsen prefers shadow to light, seldom going far before revealing something dark and sinister lying beneath the surface of even the most banal and pleasant persons and circumstances. Hedda Gabler, a newlywed just returned from her honeymoon with her husband George, a newly minted PhD (philosophy, no less!) expecting a plum appointment at the local university, finds herself situated in a large new house ready to be furnished with whatever furniture she fancies. George is clearly infatuated with his beautiful new wife, whom everyone describes (to her increasing annoyance) as “glowing.”

But appearances are deceiving; only a few minutes into the play we find that Hedda is complicated to the core. Another short essay in the program guide reports that Hedda has been described by critics as “sinister, degenerate, repellent, lunatic, a monster in the shape of a woman, with a soul too small even for human sin.” A bit over the top, perhaps, but she actually is just about all of that. But she is also charismatic, has a razor-sharp wit, crackles with energy, and as if by magic causes everyone in the room to dance to her tune.

As I watched the play unfold on the stage fifteen feet away, I realized that Hedda is not necessarily a bad person bent on the destruction of everything she touches. In this performance she was brilliantly played with the energy of trapped animal, like a tiger or lion in a zoo cage pacing back and forth restlessly, looking everywhere for a way to escape, and devouring everything unfortunate enough to fall within her reach. She finds herself in a world in which the only acceptable roles for a woman are roles that she not only would reject if given the opportunity but that she also knows she is completely unsuited for. In a twisted version of Socrates’ observation that some lives are not worth living, Hedda strikes out more and more desperately as she feels the walls closing in. When there is no more room to move or breathe, she makes the only choice available and takes her own life rather than living under these circumstances.

Two sets of sixteen freshmen and I encountered another trapped human being the next day after I saw Hedda Gabler. These seminars were the culmination of New Testament week, in which the students had already read Mark for a setup lecture; the assignment for seminar was Luke, Acts, and Romans. We spent the bulk of both seminars considering various passages in both Luke and Acts where the very clear requirements of following Jesus set the behavior bar so high that clearly no normal human being could reach it.

Iris Murdoch once commented that it would have made sense if in the Sermon on the Mount Jesus had said something like “Be ye therefore slightly improved,” but he didn’t. Instead he said “Be ye therefore perfect, as your Heavenly Father is perfect.” My mostly parochial school educated freshmen, many of whom had been taught from a young age that the Christian life is about trying hard to be a good person as often as possible, were shocked and disturbed when they encountered what the texts actually say. Even at eighteen or nineteen years old, each of them had enough life experience to know that the gospel standard is one that is impossible for the flawed creatures that we are to meet.

No one has ever described the human predicament more effectively than Paul at the end of Romans 7—which was the New Testament text in last Sunday’s lectionary reading. I took the students there toward the end of seminar.

I do not understand my own actions. For I do not do what I want, but I do the very thing I hate . . . For I know that nothing good dwells within me, that is, in my flesh. I can will what is right, but I cannot do it. For I do not do the good I want, but the evil I do not want is what I do . . . Wretched man that I am! Who will rescue me from this body of death?

Hedda found herself trapped in circumstances in which she could not flourish, grow, survive, or even breathe. Paul finds himself in the same situation, but with much greater scope. Knowing what must or should be done and finding myself completely incapable of doing it. Bottom line, this is the human condition. No wonder we often strike out in frustration and anger at whatever is within reach. However we came to be in this predicament, we cannot work or will our way out of it.

Then in this morning’s reading from Romans, in a masterful reversal of just a few lines, Paul provides a way out so compelling that it is hardly to be believed, a way whose energy coincides with the hope and promise that forms the remarkable core of the Christian faith.

There is therefore now no condemnation for those who are in Christ Jesus.  For the law of the Spirit of life in Christ Jesus has set you free from the law of sin and of death. For God has done what the law, weakened by the flesh, could not do: by sending his own Son . . .

In the religious world of my youth, Romans 8:1 was second only to John 3:16 as a one-verse summary of what Christianity is all about. There is therefore now no condemnation for those who are in Christ Jesus. That’s Paul’s expression of the heart of the Christian faith. For me, it is this hope and promise–fulfilled by the incarnation–that both uniquely defines the Christian faith and can keep a flawed, seriously damaged creature from descending into Paul’s despair or Hedda’s destructive rage. For every frustrated “I can’t do this!” there is an “Of course you can’t. But help is available.”

In response to the challenge on Twitter to summarize the Bible in one sentence, I wrote God used to be angry with us, but God isn’t angry with us anymore. This is my expression of the difference between a God of judgment and a God of love. I invite each of you to do the same; your one sentence summary of the Christian faith will express—both to you and to others—what it means to be a follower of Jesus. Put it on your bathroom mirror, use it as a screen saver on your computer. Being a vehicle of divine change in the world begins with knowing and believing that, for reasons beyond our comprehension, God chooses to get into the world through human beings. That says a lot about how highly God values, how much God loves, each of us.

July 14, 2020 "Give unto Caesar": It's the Christian Thing to Do
Recent Comments
0 | Leave a Comment
Browse Our Archives
get the latest from
Freelance Christianity
Sign up for our newsletter
POPULAR AT PATHEOS Progressive Christian
1