Welfare in my Back Yard

Welfare in my Back Yard July 9, 2016 vancemorgan

Although I am a very liberal guy, I occasionally worry about the welfare state. I understand the need for any healthy society to have various mechanisms in place to assist those who, through no fault of their own,

find themselves incapable of taking care of their own basic needs; furthermore, my Christian faith calls for me to feed the hungry, shelter the homeless, and protect the widow and orphan. But what of those who have found ways to work the system effectively, who regularly grab a handout at the taxpayers’ expense when they are perfectly capable of taking care of themselves? Many of the students in my “Markets and Morals” colloquium a year ago were so concerned about welfare abuse that they were willing to live in a world with no social safety net at all—at least we would know that those who survived had earned it.

For years,  Jeanne and I have been providing food for the hungry in a real time manner—setting it out on a first-come, first-served basis as quickly as it could be consumed. And it has been getting consumed so quickly that I have started wondering whether we are unwittingly contributing to a bunch of slackers who could take care of themselves if they would just improve their work ethic and stop looking for handouts. 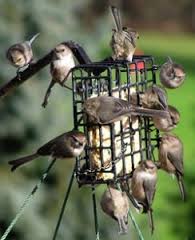 As I often do when confronted with perplexing challenges, I went to the experts—my Facebook acquaintances. The response was very interesting.

Bird lovers! We have bird feeders in our side yard–so many birds visit that we go through six cakes of suet every 36 hours or so. Mostly wrens, sparrows, chickadees, with the occasional woodpecker and even less occasional goldfinch. A couple of people have told me that one should definitely feed birds during the winter but not during the summer, since they can find their own food in the summer. I don’t want to be contributing to a dependent class of birds looking for an avian handout, and we are spending an increasing amount of money on bird food! What do you think?

The responses fell into several distinct categories. Some people just embraced the joy of helping make the lives of God’s creatures, no matter who they are, a little bit easier. But is the help primarily for those in need or for the self-satisfaction of the helper?

Others suggested that some needs should be taken care of, but not others. Thread the needle between welfare dependence and self-sufficiency, in other words.

One of the most frequent tropes was to express a preference for helping some, but not others, suggesting that it is better to feed no one than to risk the possibility that someone I don’t like might get some food despite my best efforts to keep them from it.

And some suggested that only very special types should get help.

The most nuanced response—the one that I found most attentive to all parties concerned—encouraged me to continue feeding everyone but to take closer rationing control.

My own responses to these various comments and suggestions reflect my own uncertainty about how to deal with these avian freeloaders.

I finally ended up with this tentative decision:

Truth be told, I suspect I will continue to feed them indiscriminately as they chirp innocently in the tree and our roof as soon as the feeders are empty. I am easily manipulated. 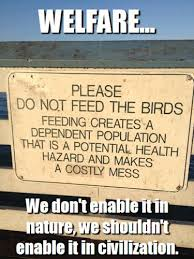 I found it interesting and a slight bit disconcerting to find that my friends’ and my attitudes about bird welfare fell immediately into categories recognizable from the never-ending debates about social safety nets and welfare for human beings in this country. The important questions remain the same. What duties do we have to those who do not have enough? Why are people in need in the first place? Should those who have enough expect those who do not have enough to prove their worthiness to be helped? What is the difference between charity and duty? Are there limits to how much those in need should be helped? And if we can’t agree about birds, what are the chances achieving consensus about our fellow human beings? I headed out to fill up the feeders right now—I wonder how many of the dozens of birds in line deserve it.

July 11, 2016 Are We Better Than This?
Recent Comments
6 Comments | Leave a Comment
Browse Our Archives
get the latest from
Freelance Christianity
Sign up for our newsletter
POPULAR AT PATHEOS Progressive Christian
1