When God Gives Us the Bird

When God Gives Us the Bird October 18, 2020 vancemorgan

I get myself in trouble on this blog occasionally, often deliberately. I know that most of my regular readers are people of like mind on matters of faith, politics, life, and just about everything I write about. But I’m always glad when a comment on the blog or social media lets me know that I’ve touched a nerve that someone would just as soon not have anyone touch. The other day, in a conversation with someone who had dropped a snarky comment about one of my essays on Facebook, I innocently referred to the Holy Spirit as “she.” The guy on Facebook immediately pointed out that, according to Jesus in the gospels, I had just committed the one unforgiveable sin: blasphemy against the Holy Spirit. I hope that guy doesn’t read this essay (although it would be fun to read what he has to say about it).

According to John’s gospel, one of the first things Jesus did when he appeared post-resurrection to the disciples (minus Thomas) was to breathe on them and say “receive the Holy Spirit.” Christians traditionally have imagined the Holy Spirit as a dove because the accounts of Jesus’ baptism in all four Gospels include a dove descending. We have mourning doves in my neighborhood—I hear them cooing at me frequently, as they sit on telephone wires with plump gray bodies and tiny little heads as I walk the few blocks from home to work in the morning. Tame, harmless, calm, gentle, easy prey for other more aggressive birds. I know these aren’t the same kind of dove that the Gospels are referring to, but they are first cousins.

However, the homilist at the Catholic church we were visiting with a friend a while ago told those in attendance that in the Celtic Christian tradition, the Holy Spirit has most commonly been represented by a very different sort of bird—the wild goose. That strikes me as far more appropriate. 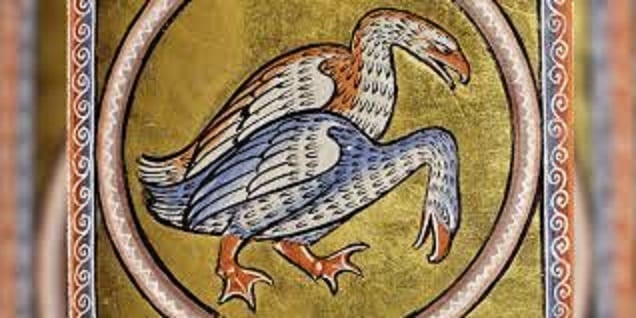 Several decades ago, when I was in my twenties, I worked for a couple of years reading electric meters for a large public electric utility in Florida. Depending on the time of the month, my daily meter reading route could be anything from walking ten miles or more in 100+ degree heat to driving close to 100 miles to read a dozen or so water pump meters hidden miles off the main roads in the middle of massive orange groves. The veteran readers filled the rookies in on where hard-to-find meters were located and, particularly, where the most problematic non-human animal life with deadly designs on meter readers was lurking on each route.

One rural route included a VFW outpost well off the beaten path; the first time I was assigned to read that route, my more experienced colleagues warned me about the “human eating goose” running loose on the VFW grounds. “Yeah, right,” I thought, figuring it couldn’t be as bad as the pit bill on the loose who had taken a chunk out of my arm a few weeks earlier.

Upon arrival at the VFW, located on several isolated acres miles outside of the closest town, I spotted the electric meter on the side of the house, about fifteen yards or so from the circular driveway in front. I parked my truck and got out; as I started walking toward the meter, I heard a demonic hissing behind me, turning just in time to see a gigantic white goose, with wings outstretched and head and neck extended parallel to the ground, running straight at me as fast as his webbed feet could carry him. 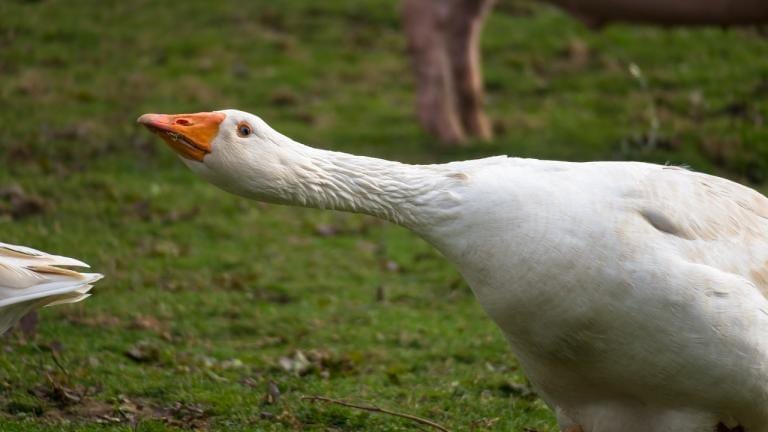 Quickly assessing the situation, I managed to jump back in the truck and slam the door a split second before the goose ran its beak so hard into the outside of the truck door that he fell over in a heap. After staggering around for a bit as he gathered his wits, the goose returned to the truck door and started pecking at it so hard that he left little dents in the metal as tokens of his rage.

Knowing that the worst thing a meter reader can do is to return from a route with an unread meter, but also knowing that discretion is the greater part of valor, I chose to break all meter reader rules and drive my truck on the lawn close enough to the side of the VFW hall to read the meter through the passenger-side window. I was accompanied the whole way by the enraged goose pecking in protest at the door, bumper, and tires of the truck. I received a mild reprimand from my boss upon return to the office for driving on the lawn (I self-reported before the goose called in); upon hearing my story, my fellow meter readers entertained me with their own “Shit, if you think THAT’S bad . . .” VFW goose stories.

The priest’s goose story at church  was about being attacked by a goose on the loose at a North Carolina zoo many years ago. He was wearing sandals and shorts; the goose in question was so insistent on pecking his toes and shins that eventually, the priest did the only thing he could: “I ran!” Drawing attention to various stories of the Holy Spirit in action in the Book of Acts, the priest suggested to the gathered parishioners that Celtic Christians centuries ago were onto something when they imagined the wild and crazy third member of the Trinity as a wild goose. 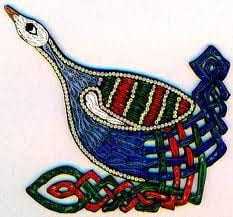 What did these early believers have in mind? Scripture portrays the activity of the Holy Spirit with many metaphors and analogies, including unpredictable wind, uncontrollable fire, and untamable energy. In short, the Holy Spirit invites the person of faith to the wild side of divinity, to an atmosphere and landscape as beautifully unpredictable as the Scottish island weather that Jeanne and I experienced last summer on our first trip together to Celtic-world. A wild goose is a true force of nature, just as likely to attack you and disturb your complacency as it is to float sleepily and swan-like on the nearest pond (swans are also bad-ass birds).

An ancient Roman legend, older than Christianity itself, establishes the vigilance and hyper-awareness of geese. As the legend goes, when the Gauls had invaded the Eternal City, they reached the Capitoline Hill and tried to seize it at night. As they approached a temple dedicated to Juno, a sacred flock of geese were awakened and alerted the Roman guards. The Roman army turned back the invaders and the geese went down in history as having saved Rome.

When Jesus breathed on the frightened disciples hiding in an upper room, I seriously doubt that they had a clue as to what they were getting into. I remember the pastor in the church of my youth occasionally saying that the Holy Spirit will never do anything to violate anyone’s free will, noting that “the Holy Spirit is a gentleman.” After many years of experience, I call “bullshit.”  The third member of the Trinity is anything but a gentleman or woman who knows her manners.

If my “faith walk” is tame, placid, orderly, and predictable, there is something amiss. Surprise, the unexpected, disturbance, and even what feels for all the world like being pecked by the divine are the hallmarks of our world being invaded by what is greater than us. Let the Holy Goose be the Holy Goose—even if this means you’ll be carrying a few dents as evidence that she has been doing her thing.