The Soul is Not a Thing, but it Most Certainly is Real

The Soul is Not a Thing, but it Most Certainly is Real October 20, 2020 vancemorgan

As a philosophy professor, I have the opportunity in just about every class to investigate, along with my students, human nature. What exactly are we? What makes us different from everything else that exists? Huge questions, of course, all tangled up with assumptions, experiences, and—in many instances—religious belief.

To set the stage for human nature discussions, I often rely on my students’ intuitive reactions to the following definition of “human being”:

A human being is a physical thing, plus something more

I start with this definition, simply because experience has told me that this “body plus something more” intuition is so common among people in our culture that it is largely taken as definitionally true. Although science tells us that everything about us, including our consciousness and all that it entails, is at least in principle reducible to the operations of our physical bodies, and although we might intellectually accept that reductive definition, we don’t really believe it. Just about everyone believes that she or he is more than “just” physical stuff, “something more” than simply a material body. But what is that “something more”? 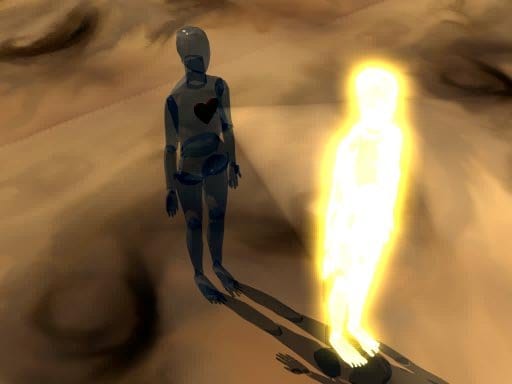 My students’ almost unanimous agreement with the proposition that a human being is a physical body plus something more has a long and illustrious pedigree. Philosophers as honored as Plato and Descartes tell us that in addition to our bodies, we also have an immaterial something that not only is non-physical, but also is the most important and defining feature of what each of us fundamentally is. Plato calls this the psyche, usually translated “soul,” although “mind” will do just as well for our purposes. Plato believed that the soul was aligned with what is greater than and transcends our physical existence, while the body is the soul’s temporary vehicle for getting around effectively in this equally temporary physical world.

This, of course, aligns nicely with many traditional religious models, in which the soul is what lasts after the body dies and decays. Any hopes for an afterlife seem to depend on the existence of this immaterial “something more”; the details of its existence after death depend on how one spent one’s time while soul and body were together during one’s physical existence. On a Catholic college campus where the majority of my students come from Catholic backgrounds, it is not surprising that belief in an immaterial soul is a “no-brainer.”

Which, of course, leaves me an opening as a philosophy professor who, at least in my own understanding of my job description, am there to ask difficult questions, challenge embedded assumptions, and generally blow my students’ minds. For instance, does the notion “non-physical thing” even make sense, since all of our experience of “things that exist” are rooted in stuff made of matter? In addition, science has told us for a long time that everything that human beings have traditionally thought that we needed an immaterial “something else” to explain—our thoughts, consciousness, emotions, and so on—is rooted in brain activity. Now, the brain is a physical thing, so all of this high-level activity that we think cannot be accounted for by “mere” physical activity turns out to be the product of the most complicated physical thing we know of—the human brain.

I have found out over the years that your garden variety person, particularly one who places her or himself within a religious tradition, does not appreciate the suggestion that they might be “nothing but” a physical thing and that the word “soul” is simply a word we use as a catch-all for all the human abilities that we can’t imagine being explained by physical things and the laws that govern them alone. If I had a dollar for every time a student has said or written something along the lines of “I can’t imagine how consciousness could be explained by the operations of a physical thing, so it can’t be explained in that way,” I’d have a lot of money. In response I always quote philosopher Daniel Dennett: “Don’t mistake a failure of imagination for an insight into reality.” When I say “I can’t imagine that X could be true,” that says a lot about the limits of my imagination, and absolutely nothing about whether X is true or not.

And yet, it certainly does feel as if there is something more going on in a human being than just physical, material activity. As I so often do, I rely on literature to provide new insights and options when the only apparently available options are too limited or just don’t make sense. I just finished Marilynne Robinson’s novel Jack; I wrote about my love of Robinson’s fiction just a couple of weeks ago as I was beginning to read Jack.

The Gospel According to Marilynne Robinson

I won’t ruin the story for you, other than to say that it is a love story between two very different people who, on the surface at least, have no business being together.

Both Jack and Della are preacher’s kids, but there the similarity ends. Jack is a classic “black sheep of the family,” with years of wandering and vagrancy, as well as a few years in prison, in his past. Della is a grade school teacher. Jack is white, Della is black. In 1940s Missouri, their relationship is suspect and scandalous, and any possible marriage in the future would be illegal. Both of them have tried to break off this apparently doomed relationship on more than one occasion, but they keep coming back to each other.

Toward the end of the book, Jack asks Della why she keeps coming back, despite her family’s resistance to the relationship, and despite their agreement that it was over the last time they saw each other. “I thought we ended this,” Jack says. Della replies that “We did end it . . . It just wouldn’t stay ended.” As she tries to explain why, she asks Jack if he believes that everyone has a soul. Jack, who tries to be an atheist, grudgingly agrees for the sake of argument. Della continues:

We know this, but just because it’s a habit to believe it, not because it is really visible to us most of the time. But once in a lifetime, maybe, you look at a stranger and you see a soul, a glorious presence out of place in the world. And if you love God, every choice is made for you. There is no turning away. You’ve seen the mystery—you’ve seen what life is about. What it’s for. And a soul has no earthly qualities, no history among the things of this world, no guilt or injury or failure. No more than a flame would have. There is nothing to be said about it except that it is a holy human soul. And it is a miracle when you recognize it.

This gives me chills and puts tears in my eyes, and not just because of the beautiful writing. When I read it, I was transported back thirty-three years to Thanksgiving Day at my parents’ condominium in Jackson, Wyoming. Fresh off a divorce six months earlier, I was there with my sons, ages eight and six, at a time of transition and uncertainty in just about every area of my life.

Also visiting my folks for Thanksgiving was a friend of my parents’ who was finishing her Masters’ degree in Santa Fe. I had heard them talk about her before, but we had met for the first time in person the previous evening. I had been exhausted from the 500-mile drive to Jackson that night with little kids in the back seat, so she hadn’t made much of an impression.

But as I watched her chatting with my mother in my parents’ tiny condo kitchen that Thanksgiving as I sat on the living room couch, I saw beauty. Not primarily physical beauty—although that was certainly there—but a beautiful soul such as I’d never encountered before. Exactly what Della is describing to Jack in the passage from the novel. Somehow, I knew that my life had just been changed, although I could not have possibly known just in how many ways that would turn out to be true. Jeanne and I treat the day before Thanksgiving as our real anniversary, but it was the next day that I first saw her for what she really was and is: A glorious presence, and a holy human soul.

Jeanne is special and unique, of course, but so is every human being. There is a divine beauty about each of us; it is sad that we truly “see” it so seldom. But when you do see it, in another person or—even more rarely, perhaps—in yourself, there is no longer any doubt that the soul is real. The soul is not a “thing,” nor is it an idea or assumption to turn into doctrinal or dogmatic commitments and agendas. It is enough, for me at least, to believe that the soul is real, a mark of the ineffable and transcendent in each of us. It is the truth.