It is not wise for a historian, or any Christian for that matter, to make predictions about the future. Prophecy is a dangerous occupation: false prophets were killed and even true prophets were often persecuted. Recently I have been amazed at what terrible prophets the greatest of Christian leaders were at the beginning of the 20th century. The best and brightest Christian leaders in the early 1900s had no idea of what was happening all around them concerning global Christianity. No one predicted that Christianity would be so dominated by the poor, by Asians, Africans and Latin Americans as it became in the 20th century.[1] And of course, no one in the West (caught up in the optimistic and progressive thinking of the early 20th century) guessed that the West would tear itself apart in two “civil wars” and embrace the secular as it did.[2] Those who attempted to look at the future were blinded by the “brilliance” of their own hubris. Europeans and North Americans looked at the dominance of (Christian) western empires ruling the world and called it a “Christian Century.” We are really not that different, so we proceed with caution.

Prophecy is an inexact science and a dangerous calling. And yet, missiologists must read the “signs of the times.” This is our dilemma. Looking around and then looking ahead is important for missiologists. Christians are to be attentive to the world in order to interpret the times. For example, changes in laws regarding religions, changes in governments and the growth in violence (or the abating of the same) mean something and should be signs for the Church. These are social changes that we need to be aware of. There are also signs that come from Christian movements: the rise of new mission societies and movements, people movements to Christ (McGavran’s “Christward movements”), newer Christian institutions, et cetera. In light of these changes missiologists need to adjust their teaching and planning. Missiologists, by definition, are constantly focusing on changes and adaptations that are needed to effectively engage in the missio Dei. Missiologists are driven to find better ways to incarnate the Life of Christ. “Constants in Context” is the way Steven Bevans and Roger Schroeder describe it.[3]

Another way of looking at this is that missionary leaders of the Church have always been more of innovators (and probably heretics) than the bishops and priests. Until the past generation worship has tended to be conservative and mission innovative. This is to be expected. Mission involves contact with the ever changing world of humanity, a world that is in constant change and turmoil. Worship is rooted in the Great Tradition and must re-center the Christian and the Christian community every week. Missionaries have had to adapt to new slang, new technology, new travel routes, and new cultures they encounter. When they do not adapt or innovate, they become irrelevant at best, irritating and obnoxious at worst. One wonders how much persecution of Christian missionaries has been caused by their irritating and uncompromising approach to cultures.

Worship, which tends to be concerned to conserve orthodoxy and orthopraxis, needs mission and visa-versa. Worship grounds mission in the foundational message and practice of the followers of Christ. Mission breathes back into the liturgy the reality of the power of the message to save, transform, and heal. When mission refuses to innovate, it turns into something like a mission station; a static place of community living, worship and institutional development. It was this approach that Donald McGavran was reacting against when he wrote his Bridges of God: A Study in the Strategy of Missions.[4]

Mission requires ongoing adaptation and engagement that is fundamentally different than a local church or mission station. What McGavran described in looking for and responding to “bridges of God” that connect with people groups, is similar to the type of adaption that mission leaders have done from the earliest times. The idea of monastic centers for copying Bibles, for translation and for church planting was a type of innovation. The development of Christian “sutras” along the Silk Road and then in China was a type of innovation as Syrian monks tried to connect the eternal message with ancient kingdoms. The major innovations of the early modern period came from the Society of Jesus (cultural awareness and adaptation), and later from the new Protestant religious orders (translation and education).

Rather than trying to describe innovations in mission that might develop in the coming decades, it is more sensible to identify recent trends in mission which will continue guide us in newer innovations. Some of these trends are obvious, others less so. Each trend will require attention of scholars, mission agencies, and global church leaders. We will be introducing one trend each week for the next eight weeks, culminating on St. Patrick’s Day. Join us as we look around and look ahead in this humble journey of attentiveness.

[3] Steven Bevans who, with Roger Schroeder, wrote, Constants in Context: A Theology of Mission for Today. (Maryknoll, NY: Orbis Books, 2004.) 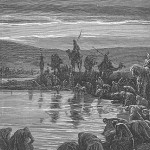 December 28, 2015
The Wind of Yahweh in Judges: The De-Commissioning of the Spirit
Next Post