Get updates from Gateway Goddess delivered straight to your inbox

Ringing in happy home energies for the holidays

Small piece of pau d’arco and lighter, check. Small crystal bell that was my grandmother’s, check. “Sacred Space” cleansing spray, check. I had everything I needed to clear my home’s energies for the winter holidays. To cleanse the traumatic energies my home has held for the past four months. For an energetic new beginning under the new Sagittarius Moon.

About four and a half months ago, under an almost-full Sagittarius moon, I was married.

About three and a half months ago, we learned the mysterious swelling plaguing my new husband since spring wasn’t a lingering surgical complication. It was cancer.

Last week, just days before the secular American holiday of Thanksgiving, we learned the chemotherapy has eliminated all the cancer cells. We’ll still do the last two scheduled rounds to make sure to kill any possible microscopic lingerers that didn’t show up in the scan. There will be a terrible month, starting in February, of one last round of chemotherapy delivered in a weekly spinal injection, to ward off possible reoccurrence in the brain.

But for the most part, we are done.

So today, on the New Moon, I cleansed the house.

Not cleaned—that had already taken place. We hosted the family Thanksgiving this year, so we cleaned. We bought new table linens. I ordered a humanely-raised, never-frozen turkey. I had the Thanksgiving of my hippie Martha Stewart dreams.

Still, the house held all the energies from the past several months, from the frenetic joy of wedding preparations to the horror of the cancer discovery. It was the only place I acknowledged that I was now a cancer patient’s wife. Wondered whether the future I’d dreamed of might not happen. Felt the fear that maybe four years and a few more months would be all we had together.

I told family and a couple close friends. That’s all. Talking about it made it more real. I felt like the more I spoke of it, the stronger it got, like a piece of black magic that grew larger and darker the more attention I gave it, until it would become a black beast that ate us whole.

The house was where both of us resolved to believe intensely that this would be one of the 93 percent of lymphomas that is defeated. That this is just a short-term unpleasantness. That by spring, we’ll be sunning ourselves on a beach to be named later. That his hair will come back curly and dark, his mustache will grow again, and all his energy will return.

The doctor’s good news was the first part of the releasing and cleansing. Cleaning and getting rid of some things we didn’t need or use any more was the second. And for the last act, the energetic cleansing on this New Moon.

And as a bonus, this New Moon happens to conjunct my husband’s Ascendant. I also noticed that Mercury, which is a key planet in both our natal charts (conjunct my Midheaven, and his natal Sun), is on the same degree as the moon was on our wedding day. So: a good day for beneficial household magic!

Before I started the cleanse, I showered and washed my hair. I had a light breakfast, and did a 20 minute sitting meditation. I didn’t use salt as an additional cleanse when I showered, but that can be helpful if you’re feeling stressed or sad.

I started in the basement, in the storage room, and finished upstairs in my office. In each room, I started by ringing the bell in the center, then walked clockwise (deosil) around the room while ringing. I visualized the sound awakening the positive energies, and starting to shake loose and dissolve any stagnant or troubled energies left from the past few months. I then misted the air with Triple Gem Creations’ “Sacred Space” ceremonial mist. It has palo santo, white sage, lavender, and orange essential oils in a base of distilled water, and is charged with aventurine, rose quartz and citrine crystals. I bought it and the pau d’arco wood in a small shop in Capitola, California (near Santa Cruz) on our honeymoon.

I lit the wood, then blew on the embers to create smoke. I walked around each room with the smoking wood and ringing bell in my right hand, and the mister in my left. I misted the corners, but used the wood and bell all around the perimeter.

I gave special attention to the chair my husband sits in most often after his chemo sessions; the place we sat when he told me the news was indeed what we had feared; and the bedroom, scene more of recovery than passion these months.

I also was very thorough in my office. We recently had it painted and bought a new desk to celebrate my working more from inside my home than outside it.

As I walked each room, I gave special attention to any places or pieces that seemed to harbor denser stagnant energies. I visualized and sensed those energies dispersing, and felt the clearer, joyful energies taking their places. I said small prayers as I walked through each room. Sometimes I called on the Gods, sometimes spirits of place or ancestors. I asked for the blessings of good food, good conversation, good loving—whatever I wanted each room to house and bring.

When I was finished, I felt happier and more serene than I have in months.

I’d love to hear any tips or thoughts my readers have on home cleansing. I’m also happy to answer questions here, or on my Gateway Goddess Facebook page, or group Facebook page.

December 10, 2016 Holiday Survival as the Family's Psychedelic Sheep
Recent Comments
0 | Leave a Comment
Browse Our Archives
get the latest from
Pagan
Sign up for our newsletter
POPULAR AT PATHEOS Pagan
1

Pagan
Decluttering for the Samhain Soul 2016: The Ritual
Gateway Goddess 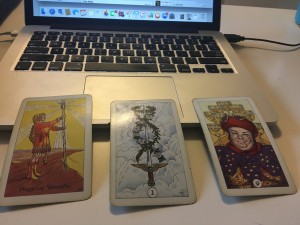