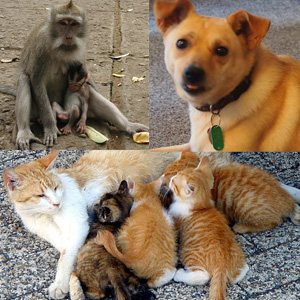 Sometimes Hindus talk about two methods of bhakti: the cat and the monkey. I recently saw a book on Christianity called Cat & Dog Theology and was intrigued.

The cat and dog metaphor turned out to have literally nothing in common with the cat and monkey metaphor, but looking at them side-by-side, I came away with a deeper understanding of the differences in how Hindus and Christians understand and approach God.

Cats carry their kittens in their mouths. The kitten goes limp and the cat does all the work.

Monkeys carry their young on their backs. The adult carries the baby, but the baby has to hold on.

The idea is that there are two ways to relate to God: surrender to God (like a kitten) or cling to God (like a baby monkey). These two approaches are often associated with the worship of Vishnu (Vaishnavism), which is seen as surrendering to God like a kitten and the worship of Shiva (Shaivism), which is seen as clinging to God like a baby monkey. In both instances, God is seen as someone who loves us and protects us.

Sometimes Christians compare this metaphor to the grace/works salvation debate within Christianity. The would see the kitten as “grace alone through faith” and the baby monkey as “works.” In Responses to 101 Questions on Hinduism, Harvard theology professor John Renard says:

Hinduism’s Way of Knowledge emphasizes the focused discipline needed to attain awareness of the unity of all things; since there is no “other” to intervene and save, grace is decidedly secondary. In the Way of Devotion (bhakti), the grace of a loving deity is all-important, the various ritual activities fading into relative unimportance. But even here, two different emphases gave rise to the “cat school,” characterized by the Belief that God takes the initiative as the mother cat does; and the “monkey school,” which teaches greater need for human effort, even as the baby  monkey has to climb aboard and hold tight if it wants a ride.

This analogy is from a book with the same title by Bob Sjogren and Gerald Robison. According to these authors:

By extension, the people who approach God as cats or dogs differ in that:

Dogs want to obey God, but Cats want God to obey them.

Some Observations on Hindu versus Christian Theology (as presented in these analogies):

I found it interesting that in the Hindu metaphor, the kitten was the symbol of complete surrender while in the Christian metaphor, cats symbolize expecting God to do your bidding. What a different take on the same animal! How the feline is perceived may depend on whether it’s relating to other felines or to humans.

In the Hindu analogy, God is someone like you who treats you like a child. In the Christian analogy, God is someone unlike you who treats you like a pet. I know a lot of Christians would balk at that, but I’m going by these authors present (conversely, I could say that these authors think God is a guy with the same personality as theirs — and that they want their pets to think of them as masters).

In the Hindu analogy, God meets you where you are. If you’re a kitten, God is a cat. If you’re a baby monkey, God is a monkey. God can accommodate different personalities. In the Christian analogy, cats are wrong and dogs are right and cats need to become more like dogs if they want to please God. The Christian analogy doesn’t value diversity. The authors fail to ask questions like, “Does God value our inherent differences? Does each of us have a unique role to play?”

In the cat and dog analogy, cat is wrong and dog is right. If you’re like a cat, you need to change and start being like a dog. You can’t have a different path than mine — if one of us is right, the other must be wrong. This aligns with America’s fascination with self-help, self-improvement, and the cultural belief that we have infinite capacity to change our inherent natures.

Since I’m not a monkey, a cat, or a dog, I prefer a few metaphors from the Shakta tradition. One says that as long as you’re content to play with your toys, Mother will leave you to play, but as soon as you’re done and cry out for Her, she will pick you up. The other (which I have also heard at a Vaishnava talk) says that if you take one step toward God, God will take one thousand steps toward you.

What matters from my own perspective is love for God, whether you surrender like a kitten, cling like a baby monkey, have the loyalty and devotion of a dog, or climb onto Mother’s lap like a child.