Some religions use symbols to represent the Divine. Other religions forbid such symbolism. Hinduism allows imagery; the images are called murti and they are a focal point during puja.

Even religions that forbid images need a focal point of some sort. That’s why Muslims face Mecca when they pray. Some Christians use icons or statues, but the ones who strictly forbid it will often hang a cross. Even with no iconography at all, Christians tend to look like they’re praying to their bed, or to a book, or to their food. That’s because we inhabit the physical world and we don’t leave our bodies when we pray. So something somewhere is going to be a focal point of some sort.

Christians call the use of imagery “idolatry” and Muslims call is “shirk.” These are offensive words that no one uses to describe their own practices. Protestants might call the pictures Orthodox Christians use “idols,” but Orthodox Christians call them icons and explain that they work like windows into heaven. No one calls what they do idolatry; it’s a word that specifically refers to the practices of other people. Other people who are wrong. Other people who are doomed to hell for being wrong.

The murti in a puja is not the result of ignorant people thinking this focal point is the Abrahamic version of Aladdin’s genie (“Phenomenal cosmic powers! Itty bitty living space!”). The murti is a recognition that the Divine permeates all things. God is everywhere. Even here among us.

What really upsets me is not that Abrahamic monotheism doesn’t allow symbols. It’s that everyone pretends that since Abrahamic monotheism doesn’t allow symbols, then symbols must be idolatry and idolatry must be bad. I think we should all stop playing along. We have freedom of religion in the United States (at least so far) and that freedom is wide open. Let’s not let some people’s religious ideas infringe on everyone else’s freedom. Freedom of religion means that I can literally practice however I want. I can decide that, since I’m a writer, I will worship a pencil. You’re allowed to think I’m an idiot, but you’re not allowed to stop me from worshiping a pencil if that’s what I hold sacred. That’s the entire point of freedom.

I’m tired of everyone pretending the use of imagery in religious practice is a sin. If your religion doesn’t allow it, don’t do it. But I won’t play along and pretend that pretty pictures are the most egregious of sins.

You know what I think are sins?

Gunning down people who practice differently than you do.

Beheading people who practice differently than you do.

Kidnapping, raping and selling into slavery people who practice differently than you do.

Forcefully or deceitfully converting people so they start practicing the same way you do.

[Note: This is part of a collaborative series on Issues in Hinduism. See also Idol Worship at The White Hindu and Religious Diversity Journeys at Seeking Shanti.]

March 17, 2015
Will the real Divine Mother please stand up?
Next Post 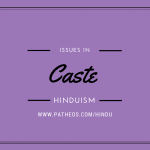