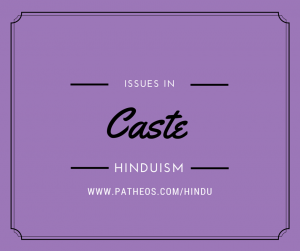 Sometimes it seems like world leaders can’t manage to get anything done. This is because, unless they’re dictators, they have to work with other leaders. But to the extent that, say, the President, is able to get things done, it’s due to a whole bunch of people doing things so that he doesn’t have to. The President may have an organic garden, but he doesn’t have to grow his own food. He also doesn’t have to wash his car, do his laundry, cook his meals, paint his living room, or go to the grocery store.

Even those of us who don’t have as many responsibilities as a world leader have a lot of things we don’t have to do. To the extent that we’re able to be productive in our own lives, we rely on others. We may enjoy cooking, but we know that if we get too busy we can grab a burrito bowl on the way home. We might sew as a hobby but most of us don’t make all of our own clothes.

Americans have almost a visceral aversion to “the caste system,” otherwise known as “the horrible thing those Hindus do that we’re glad we don’t have.” At it’s most basic, a caste system is a division of labor. It’s the idea that some of us can do some of the work and others can do other work. When we each do our own work, society runs smoothly. Caste is as old as human civilization: as soon has humans stopped being hunter-gatherers and started living in cities, they needed a more complex division of labor than, “You hunt; I’ll pick berries.”

Casteism has been illegal in India for more than 60 years. Likewise, the United States has laws against race-based discrimination. What laws can’t do is make people stop feeling superior to others.

All societies have problems of their own, but it’s always easier to look  at the problems of others. Americans rail against India’s “caste problem,” but here at home, the various races don’t have the same education, socioeconomic status, or even life expectancy. The reason we don’t have all-out riots over our income gap is because we have the “American dream” that tells us that if we just work hard enough, we can all become the 1% (further evidence that we don’t understand how math works). The reality is that some groups are overrepresented in prisons, while other groups are underrepresented in boardrooms. If you have the right race and socioeconomic status, experimenting with drugs is something you did in your teens that doesn’t mean anything. If you have the wrong race and socioeconomic status, experimenting with drugs is proof that you’re a thug and you may serve time and then have trouble finding employment because of your record.

Humans love to sort themselves into groups by their differences. Politics have become “more polarized” in recent years, meaning essentially that we stop thinking issue by issue and start being part of a tribe. Us vs. Them. Republicans in Congress are so determined to block Obama that they’re willing to look ridiculous to the entire world and even to play with things like funding Homeland Security. Because it’s no longer about the issues: it’s about this group versus that group and who is wholly superior versus who is wrong in every respect.

Even when the stakes are low, humans sort themselves into groups. Novelists identify as plotters (who meticulously outline) or as pansters (who “fly by the seat of their pants” or write thoughts as they come). People who read Tarot cards identify as those who read by the book definitions of the cards versus those who rely on their intuition. If you’re a mother, whoo boy! Hospital birth or home birth? Breast or bottle? Co-sleep or cry it out? Helicopter or free range? Public school, home school or private school? Women form factions over these issues and a new mother can find herself unexpectedly in the crossfires of issues she stumbled into, not knowing the party lines.

It doesn’t matter whole lot if a novelist is a plotter or a panster, but some differences are (or can become without notice) a huge deal. Suddenly, someone who wondered, “If chicken pox isn’t usually deadly, is it possible that the risks of a vaccine for it outweigh the benefits?” can be tarred an anti-vaxxer. Someone who noticed that ice ages have come and gone and rivers in ancient times dried up is now a “climate change denier.” The idea that the elderly should meet with a counselor to talk about what they want their end-of-life treatment to look like becomes “Obama’s death panels to kill your grandma.”

Watch anyone on the news who is talking about why they need government assistance; they always say that they know that most people who get assistance are freeloaders and fraudsters, but that they themselves have extenuating circumstances like dialysis or a heart condition. They’re all for taking assistance away from those other guys, but they themselves are unique in actually needing it.

Caste means that different people hold different jobs. In the US, different people hold different jobs, and if you think white collar workers don’t look down on blue collar workers, you haven’t been paying attention. Look around the next time you’re at a hotel or restaurant or gas station and see how the people who perceive themselves to be important treat those who clean their rooms or bring them food or deliver gasoline to the stations.

Or, if you want to know whether there is class-based or job-based discrimination in the US, consider the tirade of Conrad Hughes Hilton, great-grandson of the Conrad Hilton who founded the hotel chain. He was arrested after an outburst on an airplane, in which he yelled that he would “effing own” all of the “effing peasants” on the flight. According to witnesses,

Hilton grabbed a flight attendant by the shirt and said: “I could get you all fired in five minutes. I know your boss! My father will pay this out. He has done it before. [My] dad paid $300,000 last time.”

So, yeah. Whether we call it caste or class or whether we don’t give it a name at all and we pretend it doesn’t exist, there will always be entitled jerks born into privilege who think they’re better than the “peasants” who have to do the jobs that society relies on to sustain itself.

Mistreating others is wrong. Hindus don’t have a corner on the market.

[Note: This is part of a collaborative series on Issues in Hinduism. Read others at The Truth about Caste and Hinduism and Hinduism is Not Caste]

March 17, 2015 Will the real Divine Mother please stand up?
Recent Comments
0 | Leave a Comment
Browse Our Archives
Follow Us!