Getting a feel for the whole elephant in that Mississippi law

Getting a feel for the whole elephant in that Mississippi law May 10, 2014 Jim Davis

You know that ancient story about the blind men groping their way around an elephant? Well, sometimes the men are also unaware of each other — even here at GetReligion.

Last weekend I saw an AP story about the reaction to Mississippi’s new religious freedom law. Gay businessmen and their friends took such offense, they started putting up blue window stickers in protest — even though the law said nothing about homosexuality.

“Wow, this’ll be fun to carve apart,” I thought, not realizing that Bobby Ross Jr. had already done so. The article I read was a repost of the one he saw.

Yet our reviews offer different views on the partial blindness in Mississippi — and how the AP didn’t help clear things up before quoting the protesters.

First off, a favorite complaint of mine: balance. The AP cites three sources on the gay side, one from the opposition. And that one is an out-of-stater: Tony Perkins of the Washington, D.C.-based American Family Association. Nor, as Bobby and I both note, does the reporting (or editing) explain why gays fear a law that doesn’t mention them.

As the article says, it’s a close mirror of the federal Religious Freedom Restoration Act, signed by Clinton in 1993. Gays and their straight friends are simply taking pre-emptive action:

JACKSON, Miss. (AP) — In conservative Mississippi, some business owners who support equal treatment for gays and lesbians are pushing back against a new law that bans government from limiting the free practice of religion.

Critics fear the vaguely written law, which takes effect July 1, will prompt authorities to look away from anti-gay actions that are carried out in the name of religious beliefs — for example, photographers refusing to take pictures for same-sex couples because they believe homosexuality is a sin.

Hundreds of businesses, from hair salons to bakeries and art galleries, have started displaying round blue window stickers that declare: “We don’t discriminate. If you’re buying, we’re selling.”

The law says government cannot put a substantial burden on religious practices, without a compelling reason.

Granted, the lede tries to limit the article to the blue-sticker campaign. I wonder if that was to avoid having to cite all sides for the sake of a simpler story? Well, it doesn’t give us a complete view of public reaction to the law. It’s a better gauge of the AP’s reaction.

And the reaction, of course, of gay merchants in Mississippi:

While it does not specifically mention gays or lesbians, “People are going to take it as permission, if you will, to discriminate against people they don’t necessarily agree with or like,” said Jackson hair salon owner Eddie Outlaw, 42, who went out of state to marry his husband.

At this point, some persistent questioning — once a staple of reporting — would have come in handy. If the law doesn’t cite gays, how do you know it’s aimed at you? And if people have already discriminated against gays in Mississippi, how will another law give them “permission” to do it?

After all, as the article itself points out, the state outlawed same-sex marriage a decade ago, with 86 percent of its voters approving. The AP also notes that the state hate-crimes law does not cover acts committed against gays and lesbians.

The story should have mentioned regular criminal law, though. Even in Mississippi, I’ll bet, you can be jailed if you beat someone up or trash his store, gay or straight.

AP also trots out sympathizers with Eddie Outlaw and other gays. One of them is the perfect subject — a straight Republican who uses God talk:

Mitchell Moore owns Campbell’s Bakery, which is just up a hill from Outlaw’s salon. Moore helped create the “We don’t discriminate” sticker campaign, though he jokingly calls himself an “interloper” because he’s not gay. Moore, a Republican, said he’s angry because he believes Bryant and legislators are presuming to speak for the business community, and he said emphatically that they’re not.

“I am a straight, white, Southern, Christian conservative male,” Moore said. “I don’t understand why Christians consider one sin worse than another sin.”

AP also quotes a Maine transplant who criticizes Christians for condemning homosexuality. She also quotes an unnamed friend who who told her: ” ‘Oh, my God. We’re going to be Arizona.’  ”

See, this is what gays and their friends fear in Mississippi: a repeat of laws like the one in Arizona, which would allow businesses to shun gays. Some liberals get so militant about this, they’ll threaten to boycott business owners merely for disagreeing about homosexuality — as they did last month in a neighborhood in Portland, Ore.

Yet the law in Mississippi is different, as AP says:

An early version of the Mississippi bill was similar to the one vetoed in Arizona. The final version, however, had been changed to only specify that government could not put a burden on religious practices, without a compelling reason. Portions that would’ve allowed private businesses to refuse service were removed.

Soooo, why didn’t AP tell that to the sources, and then ask what they thought of it? The article might have hung together better.

And, as I suggested earlier: Mississippians who approve the law should have been in the story, too. As AP notes, it’s a conservative state, which banned same-sex marriage and didn’t extend special hate-crimes coverage to gays. Some folks from the majority should have been asked their views — both of the law and the blue-window sticker campaign.

You already know Bobby’s view — and now mine — of the AP’s story.

May 9, 2014
Why should the devil have all the best press?
Next Post

May 11, 2014 Some new facts on Harvard's Satanists from Daily News
Recent Comments
5 Comments | Leave a Comment
Browse Our Archives
get the latest from
Best of Patheos
Sign up for our newsletter
POPULAR AT PATHEOS Public Square
1

What religions oppose vaccination, and why?
Religion Q & A
Related posts from GetReligion 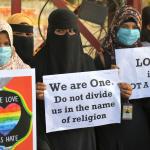 The problem with India's 'love jihad' laws
India's most populous state has brought in a law to police interreligious...