As my GetReligion colleague Jim Davis highlighted this morning, the U.S. Supreme Court on Thursday struck down a Massachusetts abortion buffer zone law.

News junkie that I am, I enjoyed perusing today’s front pages and searching Google News to see how various news organizations handled the story.

Using my media critic’s prerogative, I decided to grade some of the coverage.

My major criteria: First, how fully did a particular story cover the important details — including the court’s majority and minority opinions, the reactions by the parties involved in the case and the responses by activists on both sides of the abortion debate? Second, how fairly did the story treat all sides?

The AP covers the justices’ opinions fairly but favors abortion-rights sources in reporting reactions. Pro-abortion Planned Parenthood gets preferential treatment throughout the story, while a quote from the abortion protesters’ attorney is buried.

The Globe’s coverage of the ruling concerning its home state features a lead story that quotes a variety of sources, from the main parties to anti-abortion Cardinal Sean P. O’Malley of Boston and a pro-abortion health center owner. However, the story lacks details on the court’s decision itself and how various justices differed even as all nine opposed the law.

In a report that runs about two-and-a-half minutes, CBS presents the key facts and on-camera reaction interviews with both an abortion-rights activist and an anti-abortion advocate — both of whom come across as intelligent and professional.

It’s difficult to imagine lazier, more biased “journalism” than this television news report manages in three minutes. The report shows five sources on camera — all aghast at the court’s ruling.

The LATimes puts the ruling in context and quotes sources on both sides. In a few places, though, the report makes broad statements that seem to cry out for additional background and sourcing.

The NYTimes’ front-page story does an excellent job of explaining where the justices came down. But the Old Gray Lady shows her bias when it comes to reporting reactions to the decision, giving top billing — and much more space — to Planned Parenthood than the winning plaintiff.

The Journal covers a lot of ground in a relatively short amount of space and manages to do so without tilting its coverage toward either side. The lack of mention of 77-year-old anti-abortion activist Eleanor McCullen — the namesake along with Massachusetts Attorney General Martha Coakley in the case McCullen v. Coakley — prevents the top grade.

Until almost the end, the Post’s story offers a textbook example of how to cover a controversial issue fairly and down the middle. But then the final paragraph gives an official from — surprise, surprise — Planned Parenthood an opportunity to lambaste the decision. What’s missing? Any reaction from an anti-abortion group. Why quote one side and not the other?

That’s my report card. What other coverage have you seen? What grades would you give? 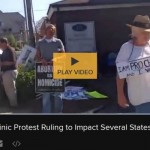