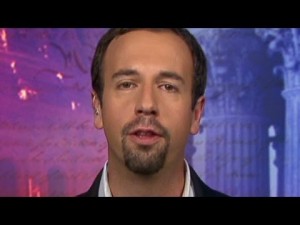 It’s always hard to see people leave the Godbeat, even while you wish them well. Dan Gilgoff has been a religion news writer for as long as I’ve been here at GetReligion and his most recent work — at CNN’s Belief Blog — has probably been my favorite.

But now he’s abandoned us for a fancy job as director of digital news at National Geographic! At least we’ll still have Eric Marrapodi there.

As he left, he wrote up the five things he learned from his three years of editing CNN’s Belief Blog. It includes the explosion of “nones” in the religious landscape. My favorite was this one:

3.) Religion reporting shouldn’t be an inside game. “We believe that understanding the role of faith in today’s world isn’t optional or nice to know,” we wrote in our inaugural Belief Blog post, in May 2010. “It’s need to know.” That was true again for many of 2012’s biggest stories, for which understanding forces of faith and faithlessness were crucial to understanding the nominees for president, reactions to July’s deadly Aurora, Colorado, shooting and Whitney Houston’s funeral. You don’t have to be religious to think religion stories matter; you just have to be curious about the way the world works. I believe that more now than I did when we launched the Belief Blog.

You just have to be curious about the way the world works. Exactly. And then he cautions people who sense an anti-religious bias in the news media:

4.) The news media isn’t anti-religion. You hear that from some religious people, particularly those on the political right. Truth is, news organizations such as CNN are fascinated by religion because it yields stories brimming with meaning, controversy and powerful characters. But the religion beat can scare off reporters because it can be so daunting (if you’re a non-Mormon, try wrapping your mind around the Mormon practice of posthumous proxy baptism in time to meet a 5 o’clock deadline). And yet so many CNN Belief stories were born when CNNers across the organization asked basic questions such as, “Will the Catholic presidential candidates don ashes for an Ash Wednesday debate?” and “Why don’t we explain why some American Muslim women wear the hijab?” Many other religion stories came from CNNers who volunteered ideas from their own religious subcultures. CNN forces working against religion coverage? I never encountered any.

You know, I enjoy this answer but it reminds me of something I’ve desired to see more of in general. I wish that we’d see much more reflection on and self-analysis of why, exactly, it is that some religious folks (even if I disagree that this sentiment is only expressed by those on the political right) sense a hostility from the media toward religious views or people who hold them. I think there is value in more reflection on and less dismissal of complaints against us as journalists. But that’s what I’d put on my list of five, so I should just move on.

Finally, and I’m glad to see this from someone who did so much to advance digital journalism as it relates to the Godbeat, we get this reflection:

5.) In the world of digital journalism, your voice matters more than ever. With the proliferation of reader comments, social media and instantaneous metrics on what our audiences are clicking and how they’re responding, your choices and opinions are shaping our coverage more than ever. Some of our best content from the last year was more about conversations happening around the news than about the news itself. We choose to do certain stories and skip others partly based on whether you’re engaged in those stories or not. Use your power wisely.

I love it. I also love the generally positive take Gilgoff has throughout his piece. We see so many people lamenting the demise of journalism and not enough journalists embracing the way digital media change what we do. I absolutely love that Gilgoff doesn’t just remind readers of their power, but encourages them to use this immense power prudently.

So best wishes to Gilgoff as he heads off to National Geo — I’m sure they’ll be very pleased with their hire.

Wanted to thank me brokenly, I suppose, for so courteously allowing her favorite brother a place to have his game legs in, Eh? [said Bertie Wooster]

Possibly sir. On the other hand she alluded to you in terms suggestive of disapprobation. [said Jeeves]

“Feckless idiot” was one of the expressions she employed, sir.

I couldn’t make it out. I couldn’t see what the woman had based her judgement on. My Aunt Agatha has frequently said that sort of thing about me, but then she has known me from a boy.

The 9/11 assaults on the U.S.  consulate in Benghazi and embassy in Cairo have jumped to center stage since the first reports came out on Tuesday. The press has continued to do a fine job of highlighting the religious and political issues behind the protests — this report from the AP on the Benghazi attack is quite good. The latest round of stories also addresses the question whether the assaults were spontaneous acts of religious outrage in response to an anti-Mohammad film, or where they planned attacks?

The deadly attack on the U.S. Consulate in Libya may have been a planned operation and not a spontaneous protest that turned violent, U.S. officials told the New York Times and CNN on Wednesday. Initial reports suggested that protesters in Benghazi, Libya, were angry about an online video that mocked the Muslim Prophet Muhammad, and then attacked the consulate, killing U.S. Ambassador Chris Stevens and three other foreign service workers. But now, according to the New York Times, officials suspect that “an organized group had either been waiting for an opportunity to exploit like the protests over the video or perhaps even generated the protests as a cover for their attack.”

There are reports out of Egypt that the Cairo assault was also a planned spontaneous political action that was awaiting a religious provocation — this was the opinion of my Christian Egyptian contacts on Tuesday. MEMRI states:

In contrast to the foreign reporting, I’ve not been that impressed with the even handedness of the domestic stories. For example, Geoffrey Dickens at NewsBusters reports:

The Big Three (ABC, CBS, NBC) Wednesday evening newscasts devoted more than 9 minutes (9 minutes, 28 seconds) to the flap over Mitt Romney’s statement criticizing the administration’s handling of the Libyan crisis but spent just 25 seconds on questions regarding Barack Obama’s Middle-East policy, a greater than 20-to-1 disparity.

Has anyone seen any MSM reports about why conciliatory messages from U.S. officials aren’t going over well with some Americans?

I would however like to single out for particular praise CNN’s story “Ambassador’s killing shines light on Muslim sensitivities around Prophet Mohammed” by Dan Gilgoff and Eric Marrapodi.

This well written, well researched, finely balanced piece from CNN provides the views of Sunni Muslim scholars who explain why a film portraying Mohammad in an unflattering light would provoke religious outrage.

Violence over depictions of the Prophet Mohammed may mystify many non-Muslims, but it speaks to a central tenet of Islam: that the Prophet was a man, not God, and that portraying him threatens to lead to worshiping a human instead of Allah.

“It’s all rooted in the notion of idol worship,” says Akbar Ahmed, who chairs the Islamic Studies department at American University. “In Islam, the notion of God versus any depiction of God or any sacred figure is very strong.”

“The Prophet himself was aware that if people saw his face portrayed by people, they would soon start worshiping him,” Ahmed says. “So he himself spoke against such images, saying ‘I’m just a man.’”

Do read the whole story. It will give you a good grounding in one of the religious angles in this affair.

My first post on this story also generated several thoughtful comments focusing on the statements issued via twitter from the U.S. embassy in Cairo. “The Old Bill” asked who had tweeted these comments, while “Ben” questioned the timeline. When did the Embassy release the tweet and press statement — before, during or after the compound was attacked?

By day’s end, these questions had entered the U.S. political arena as Mitt Romney criticized the administration over the tweets and statement. Foreign Policy Magazine’s “The Cable” has a solid story that looks at these issues, identifying the embassy staffer who wrote the tweet — and revealing the anger within the State Department over the content, timing and tone of the embassy tweets and statement.

People at the highest levels both at the State Department and at the White House were not happy with the way the statement went down. There was a lot of anger both about the process and the content,” the official said. “Frankly, people here did not understand it. The statement was just tone deaf. It didn’t provide adequate balance. We thought the references to the 9/11 attacks were inappropriate, and we strongly advised against the kind of language that talked about ‘continuing efforts by misguided individuals to hurt the religious feelings of Muslims.'”

Despite being aware of Washington’s objections, the embassy continued to defend the statement for several hours, fueling the controversy over it, a decision the official again attributed to Schwartz.

The State Department has long had a reputation of being disconnected from reality. Spiro Agnew is not the author of the title of this post — that honor belongs to a Democratic congressman from Ohio who in a 1948 speech condemned the reluctance of the State Department to engage with China over the fate to two downed airmen. The actions of its public affairs officer in Cairo has done the administration no good — adding yet another stanza to the song of the feckless idiots of Foggy Bottom.