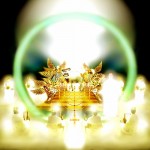 Get your hymnals out now, because at the end of this meditation, you ought to feel like singing songs of praise to Jesus Christ!

Jesus Christ is God’s Final Word to us (the “last days” actually occurred in the 1st century, according to the writer of Hebrews), who are to live by every word that proceeds from the mouth of God.  In the past, God spoke through the prophets, and God’s people were to listen to and obey every word from God, and to respond with confession, praise, and thanksgiving.

But now, God has spoken through His Son, who is The Prophet.  He is not only The Prophet, but also the Word that the Prophet speaks, and the subject about which the Prophet speaks.  He is, in Himself, the complete Word of God, proclaiming and making known the Father and His salvific will.

He is the heir of all things.  Having been obedient, having died for the world, having been raised in glory, and having ascended and been seated at the right hand of the Father, Christ is the heir of all things.  To Him alone now, and not Satan, belong the heavens and the earth.  Chief among His inheritance is us, His people, who through Him have inherited life with Him.  He is the King of kings and Lord of lords.

He is the brightness of the Father’s glory, the Shekinah glory seen through the Bible.  He is the glory of Mt. Sinai that made Moses’ face shine, and He is the glory that so filled the Temple that the priests had to skeedaddle out of there.  He is the Christ of the Transfiguration, the blinding light that knocked down St. Paul, and the Sun of eternity in the book of Revelation.  He is the radiance of God that radiates out from heaven and cuts through all time and space and the darkness of men’s soul and whose glory is in all the earth.

He is the very image of the nature of God: He is the Father made visible to us, so that having seen Him, we have seen the Father.  He is the stamp of God upon Him, so closely identified with the stamper that the One Who Is and the One Who Is the Image are one and the same.

He is not only the Creator but also the Sustainer, upholding all things by His Word.  The world does not have an existence of its own: it is not a self-organizing, sentient, entity but is utterly dependent on the will and the Word of its Creator and Sustainer.  If He who created stopped sustaining, then quarks would come unglued, the four elementary forces of physics would lose their grip, and the universe would dissipate into nothingness.  He is what Hindus and Buddhists seek in the atman, the One, only they do not see Him for Who He Is.

This One who is God Almighty, the image and brightness of God and His glory, the Creator and Sustainer, is also the Redeemer.  He is the One who bled and died on Good Friday and took upon Himself not only human flesh but also human sin.  He is the Holy One of Israel who purges away the sins of the polluted ones who He had created good but who we had ruined.  He is the perfect Temple, the perfect Priest, and the perfect Sacrifice.

This one, once He had been raised from the dead and ascended to heaven, sat down at the right hand of the Father.  From there He now rules as King of kings and Lord of lords.

Compared to Him, angels are nothing.  When men see angels, they are tempted to fall down and worship them.  But every good angel immediately explains that he is also a creature and is not God.  But when men see Christ, they fall down and worship, and they can’t get up until He has helped them up.  He is farther above the angels than the angels are above the amoebae.  When the angels see Him, they are the ones that fall down on their faces and can’t look Him in His face.

This is the Jesus Christ you have come to this morning.

Now go and sing His praises!

Prayer:  Help me to see You today, Lord, and to worship You, who are the Son of God, whom the angels worship, who sits enthroned in heaven, who created the heavens and the earth.   You who are the Prophet, Priest, and King, and Creator, Sustainer, and Redeemer, and have purged away my sins.  Amen.

Point for Meditation:  Take a few minutes and meditate on each of the phrases concerning Christ in verses 2-4.  Pay attention to how you respond to each.  Allow your meditations to lead to worship of Him.  You may even want to space the meditations throughout the day so that you meditate on a different phrase at different times of the day, and in this way the whole day is made a day of worship to Him.

Resolution:  I resolve to worship Jesus Christ today.  I resolve to make an opportunity to sing His praises, to worship at His feet, to hear and obey His Word, to repent and go and sin no more, or do whatever else He is directing me to do as I worship Him today.

December 30, 2015 What Does a High Priest Do?
Recent Comments
0 | Leave a Comment
Browse Our Archives
get the latest from
Give Us This Day
Sign up for our newsletter
POPULAR AT PATHEOS Evangelical
1

Religion as "Communal Solidarity" or "Personal...
Cranach
Related posts from Give Us This Day