What Does a High Priest Do? 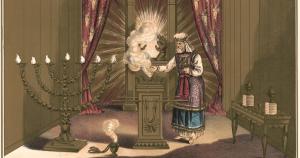 Jesus Christ, the God-man, is a mystery, but thankfully a mystery that God Himself has revealed to us.  The God who made Himself man for us continues to amaze and mystify us.  More importantly, He continues to save us!

In Chapter 1, the writer of Hebrews composed a superb description of the supremacy and glory of Christ, who is the brightness of God’s glory – because He is God Himself.  As with John’s illumination of Christ in the book of Revelation, we should lie at the feet of Jesus, worshiping Him for who He is, acknowledging Him to be the all-glorious King of kings, and singing His praises.  He is the All-powerful and All-glorious One.

But what’s even more amazing than this is that this All-powerful and All-glorious One became man, for us.  We see in Jesus Christ, therefore, the startling marriage of great power and great mercy, of great glory in great humility and suffering.

What do we find this Most-glorious God of Chapter 1 doing in Chapter 2?  We find the One who is far above the angels made a little lower than the angels.  We find the King of Glory suffering and dying for us in humility and humiliation, that through this death and suffering He might be crowned with glory and honor.

But wait a minute.  If the only payoff for Him was to receive glory and honor, why didn’t He just stay in heaven?  Already, He shared the glory everlasting of the Father.  Why all the suffering and humiliation and death before the glory – a glory that was already rightfully His?

This is the most amazing part of all: He who made man became man for man.  He who was all-glorious suffered that man might also be crowned with glory and honor.  He who is the Life Everlasting tasted death that we might have eternal life with Him.

It is the glory of God that He is not only all-powerful but also all-merciful.  The One who was perfect in Himself for all eternity became one of us, that we too might be perfected.  The Son of God who was begotten, not made, for all eternity, was also made man for us.

This Almighty, All-Glorious, All-Holy God, in His mercy, is not afraid to call us brothers and sisters (verse 11.)  By His temptation, He sanctified you.  By His suffering, He brought you to glory.  By His death, He brought you to life.  This is the power of our All-Merciful God.

The Son of God became man that He might make you His brothers and sisters, fellow children of God.  The God who is as far above us as heaven is above earth became like you that you might share in Him and His life.

It was for us, for humans alone, that He came to be our High Priest.  He did not come for the angels, great as they may be.  I heard the story once of a man who encountered an unusual demon at an exorcism, the only demon I ever felt compassion for.  During the course of this exorcism, a demon spoke to one of the exorcists, asking: “Why didn’t Jesus Christ die for us? (meaning the fallen angels or demons)  The answer is that He came for man.

This is the power of your God, that He came in mercy for you.  This is not merely intellectual theology.  I’m not going to give you a pop quiz over the difference between expiation and propitiation or over theories of the Atonement (though the teacher in me is begging me to!)  This is about your life.  This is about the ways in which you are tempted to sin against God – the ways each day that you deserve the wrath of God, the ways you fail God every day.  But it’s also about the power of mercy of the One who was tempted in every way that you were, and yet was without sin.  It’s about the One who was made perfect through temptation because He rode further into the black heart of temptation and Satan’s domain than you will ever be able to – and rode out again victorious and untarnished.

This is about the ways in which you suffer and moan and groan about it, forgetting that what you suffer in this life is only a drop of Tabasco sauce on the tongue compared to the whole body and soul fire in Hell that is your birthright.  But it’s also about the One who suffered for you, though He was without sin.  It’s about the captain of your salvation who suffered, that He might bring many sons to glory.  It’s about the Sanctified One who has sanctified you and made you a saint that you might live for Him.  It’s about how your suffering is now a participation in the sufferings of Christ, just as His sufferings were a participation in yours.

And it’s about the power in your life of your High Priest who even now suffers with you, just as He suffered for you.  He is the one who offers His aid to the seed of Abraham.  He is the Man of Sorrows, well acquainted with suffering and temptation and grief – that He might better help you in yours.

This High Priest is the Almighty, All-Glorious God, in whose presence you ought to prostrate yourself in worship.  But He’s also the All-Merciful Christ, your brother who offers His right hand to you that He might raise you up with Him.

In all of your temptation and sin and suffering, come to Jesus Christ, your merciful and faithful High Priest today.

Point for Meditation:  Meditate on how God is asking you to respond to His mercy to You today.

Resolution:  I resolve to come to my High Priest today and present before Him the temptations, sins, and suffering that are oppressing me today.

High Priest in the Holy of Holies – U.S. Public Domain

Top 7 Bible Verses For Blessing...
Christian Crier
Related posts from Give Us This Day