Have You Heard from the Lord? 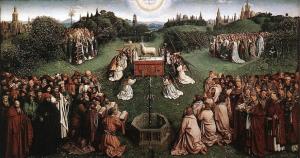 “Be of good cheer, Paul; for as you have testified for Me in Jerusalem, so you must also bear witness at Rome” (Acts 23:11).

These words of Jesus might have sounded to St. Paul like the following: “Listen, Paul, I know that you’ve had a pretty tough go of it so far, I mean with the stonings and imprisonments and floggings and death threats and what not.  But I’ve got good news for you – I won’t let them kill you in Jerusalem.  You’ll hang on long enough to at least make it to Rome, because the Jews have to hand you over to the Gentiles.

So remember: be of good cheer!”

But I’m sure St. Paul didn’t hear the words this way.  I’m sure my little paraphrase tells you more about me (and maybe yourself) than it does St. Paul.

The truth is that Paul heard many things from Jesus, many difficult things, and yet his determination to be faithful in all things only increased.  It makes an interesting study to look at the red letter words of the New Testament outside of the Gospels.  There aren’t very many of them, and the vast majority are spoken to Paul.  Here are a number of them.

“I am Jesus, whom you are persecuting.  It is hard for you to kick against the goads” (Acts 9:4).

“Go, for he is a chosen vessel of Mine to bear My name before Gentiles, kings, and the children of Israel.  For I will show him how many things he must suffer for My name’s sake” (Acts 9:15, spoken about Paul to Ananias).

“Arise and go into Damascus, and there you will be told all things which are appointed for you to do” (Acts 22:10).

“Make haste and get out of Jerusalem quickly, for they will not receive your testimony concerning Me” (Acts 22:18).

“Rise and stand on your feet; for I have appeared to you for this purpose, to make you a minister and a witness both of the things which you have seen and of the things which I will yet reveal to you.  I will deliver you from the Jewish people, as well as from the Gentiles, to whom I now send you, to open their eyes, in order to turn them from darkness to light, and from the power of Satan to God, that they may receive forgiveness of sins and an inheritance among those who are sanctified by faith in Me” (Acts 26:16-18).

“Be of good cheer, Paul; for as you have testified for Me in Jerusalem, so you must also bear witness at Rome” (Acts 23:11).

As you can see, Paul heard a lot of things directly from the Lord, not even including the visions he spoke of in 2 Corinthians.  Although many of these things foretold difficulty and suffering, Paul continued listening to His Lord and obeying Him.  Knowing what Paul had in store for him, I find Jesus’ words in Acts 23:11 somewhat humorous.  Maybe it’s just me (probably so), but Jesus tells Paul, who knows that danger will be found in Jerusalem and Rome, to be of good cheer.

Humorous to me, and yet very serious.  How can Paul be of good cheer, knowing what is likely to lie ahead, including chains?  The same way he can take pleasure in his infirmities, reproaches, needs, persecutions, and distresses (go see 2 Corinthians 12:10).  Paul can be of good cheer because he knows Jesus Christ.  What Jesus has said would happen has happened.  Every step of the way, no matter how difficult things got, Jesus was with Paul.  And the will of God was done mightily in Paul’s life.

Paul had heard many things from Jesus, and through them he had learned to trust and obey His Lord.

You, too, have heard many things from Jesus, your Lord, as I know I have.  I haven’t heard many “Red Letter” words from Jesus that leap out at me.  There haven’t been many moments in my life when He’s knocked me down and told me in an audible voice what must happen next: in fact, it’s never happened.

And yet I tell you that He’s spoken to me, and to you as well.

Here’s what I want you to do.  I want you to make a list of 3 things.  It’s worth doing, if for no other reason than that it’s what I’ll suggest you do in my Points for Meditation later anyway!

First, write down some of the things you know that your Lord has told you because they are certain things that He’s told to all of His disciples.  This will include both commandments and promises.

Second, make a list of specific times when He has given you direction in your life.

Third, write down what you know He’s been trying to tell you recently.  Do this without censoring what you write or trying to filter it.  Be honest.  If you’ve been looking at the Resolutions I give you at the end of each Give Us This Day, you’ll have noticed how many times I’ve asked that you listen to what He’s telling you now.

Jesus Christ has spoken with power and truth and authority in your life, and He’s still speaking to you.  If you listen closely, you may even notice that His words become red letter words for you!

Prayer:  O God by whom the meek are guided in judgment, and light riseth up in darkness for the godly; grant us, in all our doubts and uncertainties, the grace to ask what Thou wouldest have us to do; that the Spirit of wisdom may save us from all false choices, and that in Thy light we may see light and in Thy straight path may not stumble, through Jesus Christ our Lord.  Amen.  (William Bright)

Point for Meditation:  Go and do the 3 things I suggested in the meditation above!

Resolution:  I resolve to listen to what Jesus is telling me today and to pick one of these things to do today. 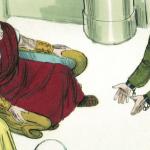 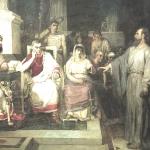 Church Should Be Your Excuse for...
The Chorus In The Chaos
Related posts from Give Us This Day 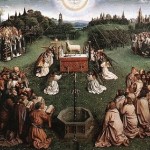 Evangelical
John 5:30-47 - A Great Cloud of Witnesses
Give Us This Day 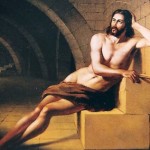 Evangelical
Luke 4:42-5:11 - How the angels obey
Give Us This Day
TRENDING AT PATHEOS Evangelical