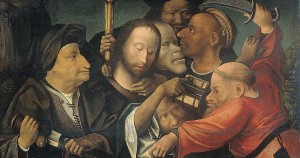 “Now when He said to them, ‘I AM,’ they drew back and fell to the ground.”

I’ll bet your English translation of the New Testament says not “I AM” but “I am He” or something like that.  Yes, on one level Jesus is answering those who seek to know if He is Jesus of Nazareth.

But He is also saying so much more to them and to you.

This is a striking scene, worthy of our resting here for a while in meditation.  Jesus has just been praying in the Garden of Gethsemane with His disciples, a scene that is described in more detail in the other Gospels.

When Jesus has His Last Supper with His disciples, they probably don’t know what He has just done for them and to them.  For all they know, they’re just celebrating another Passover.  Little do they know that this is THE Passover, THE Sacrifice, THE Lamb of God that takes away the sins of the world.

When Jesus prays for them in John 17 in the Garden, little do they know that this is THE High Priest praying before the Father for them, offering up THE Sacrifice.  Little did they know that at Gethsemane (which means “Olive Press”) that Jesus Christ is the Olive Tree, to which both Jews and Gentiles are related.  He is also the olives that are about to be pressed and crushed, whose oil will flow and bring healing and anointing to the nations.  Thus, the Anointed One is anointed not only with the Spirit but with His own sacrifice.  The disciples cannot know any of this yet.

When Jesus crossed the Kidron Brook with His disciples, little would they have known that they had just seen the Crucifixion and the sacrifice of the sins of the world foreshadowed before them.

Remember that this is Thursday night of Passover week.  Hundreds of thousands of Jews have come to Jerusalem to offer up their Passover lambs.  These lambs were sacrificed in the Temple, and estimates for the number of lambs offered during this time range from 200,000 to 500,000.  Where did all of this blood go, for if it had collected in the Temple, the priests, Levites, and worshipers would have drowned in blood?!

The blood of the lambs was poured into a pipe at the base of the altar of sacrifice.  This blood was carried via water ducts to the Kidron Brook, the same brook that Jesus and the disciples cross over at approximately 11:00 p.m. on Maunday Thursday.  As they cross, the full moon would have illuminated the brook to them, and they would have seen the blood mixed with the water of the brook.  But only Jesus would have seen in it His own flow of blood and water while on the Cross.

Likewise, those who come to arrest Jesus have no idea WHO IT IS they are about to arrest.  They probably think many different things about WHO HE IS – all of them wrong!  The soldiers are looking for Jesus of Nazareth because it’s their job, and they must do it.  The officers of the chief priests and Pharisees have been delegated to go and find this troublemaker who can no longer be tolerated.  To them, He is a false prophet and teacher.  And then there is Judas, the anti-disciple.  Had he truly believed Who Christ was, how could he have betrayed Him?

And so our English Bibles help us to live by sight and not by faith.  We’re allowed to think that Jesus is just saying, “Hi, guys.  Yoo-hoo, over here.  I’m Jesus of Nazareth.  I’m the guy you want.”

When what He’s really saying is, “I AM!”

If all He were saying was, “I’m the one you’re looking for,” then why did those who came to arrest Him draw back and fall to the ground?  What – did the thongs of their sandals get tangled up and they tripped?

No, they have an involuntary moment of prostration (an IMP, as we in the theo biz like to call it [actually, I just made that up]).  They cannot help but draw backwards and fall to the ground because for one brief second they know in their souls who Jesus is.  And then they come to their “senses” and get on with the surreal business of arresting God.

And so it is with our lives.  We go through the day, reading our lives as if Jesus is just some guy saying, “I’m the one you’re looking for,” when really He’s proclaiming, “I AM!”

You will not always have a day of Resurrection or even a day of Crucifixion.  Not all your prayers will be like those of Jesus in Gethsemane, and not all your Eucharists will seem like the Last Supper.

But The One Who Is I AM stands before you every day.  He will not usually come with such force that like those coming to arrest Him you are compelled to draw back and fall down.

These men who came to arrest Jesus, though they saw a prominence of the glory of the Son flare forth for one second, did not believe.  And yet we, who have not seen His glory in this way, believe.

Our days are spent hearing only the “I’m the one you’re looking for” from Christ.  But we are to hear, beneath His small still voice, the “I AM!” that He is also proclaiming.

I AM is here before you this very day.  He is the One you are looking for.  When you see Him, do not treat Him as a common occurrence, regardless of the poverty in which He comes.

Acknowledge Him to be I AM.  Love Him as HE IS.

If you do this, you won’t need to worry about your response when He comes: “Should I bow or genuflect or prostrate myself.  What shall I say?”

When you acknowledge Him as I AM, today and every day, throughout the day, you’ll know exactly how to respond.

Prayer:  O Father of glory, this is the cry of our hearts – to be changed from one degree of glory to another, until, in the resurrection, at the last trumpet, we are completely conformed to the image of your Son, Jesus Christ our Lord. Until then we long to grow in grace and in the knowledge of our Lord, especially the knowledge of his glory. We want to see it as clearly as we see the sun, and to savor it as deeply as our most desired pleasure. O merciful God, incline our hearts to your Word and the wonders of your glory. Wean us from our obsession with trivial things. Open the eyes of our hearts to see each day what the created universe is telling us about your glory. Enlighten our minds to see the glory of your Son. We believe that you are the All-glorious One, and that there is none like you. Help our unbelief. Forgive the wandering of our affections and the undue attention we give to lesser things. In Jesus’ name we pray, amen.  (John Piper)

Resolution:  I resolve to spend some time today to specifically acknowledge Jesus Christ as I AM, and to allow time to respond to Him appropriately.

July 21, 2017
Participating in the Unity of the Trinity
Next Post

Evangelical
John 9:1-23 - am I? I AM!
Give Us This Day
TRENDING AT PATHEOS Evangelical