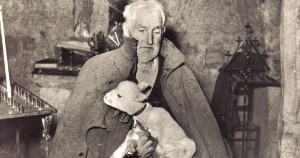 The Good Shepherd not only knows His sheep but also leads them.  “He calls His own sheep by name and leads them out.  And when He brings out his own sheep, He goes before them; and the sheep follow Him, for they know His voice” (verses 3 and 4).

The Good Shepherd must go before His sheep and lead the way because we are wandering sheep who do not know the way (but often presume to).  Sheep are creatures of habit.  On their own, they will follow the same trails until they are muddy ruts.  They will graze the same hills until they become deserts, and they will pollute their own ground until it becomes corrupt with parasites and disease.  Therefore, the Good Shepherd goes ahead of us, because we follow the same ruined trails (“We’re on the highway to hell) every day of our lives.

To better lead us, the Good Shepherd did the most extraordinary thing: He became one of the sheep.  The Good Shepherd became the Lamb of God that takes away the sins of the world.  All of His life on earth was for you, that you might follow Him.  He experienced everything you will, including temptation, and yet was without sin, that He might go before you and lead you safely to the Promised Land.

Because, left to ourselves, we will ruin ourselves and the earth around us, turning oases into deserts and paradise into parasites, the Good Shepherd keeps us moving as we follow Him.  You cannot stand still in the spiritual life: you are always moving.  Either you are following the Good Shepherd or you are wandering from Him.

The Good Shepherd also leads His sheep by protecting them.  First, He protects them from their enemies.  There are outside predators, ravening wolves, waiting to devour the sheep.  They are the offspring of Satan, the roaring and ravenous lion, and they will use any means possible to devour the sheep.  But just as David defeated both bear and lion, Jesus Christ the Good Shepherd has defeated and will defeat Satan and his wolves.

The sheep are also protected from themselves by the Good Shepherd: sheep have been known to kill other sheep, and each individual sheep is prone to great stupidity which jeopardizes his life.  A “cast” sheep is an English term for a sheep who has laid down on uneven terrain and accidentally turned over on its back so that it can’t get back up.  This is a pathetic sight: lying on its back, feet in the air, kicking away frantically, bleating in frightened frustration, the sheep is completely helpless unless the shepherd comes to rescue it.  If the shepherd does not come in time, the weight of the sheep will cut off the circulation of blood and gases will build up in its stomach and it will soon die.

Sound ridiculous?  But that’s who we are without the Good Shepherd and His leading and protection, even from, especially from ourselves.  We are like sheep, lying and waiting daily for the salvation of our shepherd.

It’s pathetic as well to watch sheep try to lead.  They wander everywhere.  They lead each other into ditches, mud puddles, and into the paths of wolves.  They move further and further away from food and water and will starve to death without their shepherd.

The good shepherd leads his sheep to a place where all of their needs are met: not necessarily their desires, but their true needs, which the good shepherd knows better than the sheep themselves know.  He prepares a table for his sheep: a table can mean a mesa or table, a plateau, which are sought after grazing grounds for sheep.  The shepherd must go before his sheep and pull up all poisonous plants, take supplies of salt and minerals and distribute them, chasing away predators.  He must also find good food and water there for the sheep.  Thus, the shepherd prepares the table for his sheep: he leads them that his sheep may safely graze.

Christ, of course, prepares the Lord’s Supper, Himself, for our heavenly food: we, as His sheep, feed upon the best food on heaven or on earth.  Christ gives us life abundantly through Himself, and we are well-fed and healthy.  No sheep in the universe are as well-provided for as those of Jesus Christ.  We partake most fully of Him in the Holy Communion with Him but we are also privileged to feed off Him who is our daily bread.  Jesus turns out to be not only the Good Shepherd but also the food off which we graze.

From all of this: from wandering, from spiritual starvation, from those who would devour us, from our own foolishness, and from death the Good Shepherd delivers us.  He desires to lead you to a good place, saying “In my Father’s house are many mansions . . . .  I go to prepare a place for you.”

Jesus, our Good Shepherd, therefore leads us, but we the good sheep must follow the Good Shepherd.  Sheep are born to follow: we’ve already heard about what happens when you leave the sheep in charge.  But Jesus your Shepherd goes before you; He calls with His voice; and your job is to follow.

You must not go our own way, like children and students, and adults as well, come to think of it!  As a parent and teacher I have become a scientist who studies human nature.  You hear every excuse in the book – and some not written in any book!  Like children or students, some of you are asleep.  “But I didn’t hear you say . . .” (Yes – because you were too busy doing your own thing – doodling, talking, watching a video, literally falling asleep in class.)

Some of you are governed by feeling – “But I don’t feel like it.”  Some of us are: arrogant.  “She doesn’t know what she’s talking about so I don’t have to listen.”

What kind of sheep are you this morning?  asleep?  arrogant?  governed by feelings?  Jesus Christ is your Good Shepherd.  He says that He knows His good sheep and that the good sheep follow Him (verse 28).

I am reminded today that prayer, meditation, and the making and keeping of resolutions are related spiritual disciplines.  This is a good time to remember that you might want to reflect on your meditations on the Scriptures.  Go back and reflect on the 4 steps of the lectio divina that I described in the Introduction to Give Us This Day.  Feel free to experiment with the order of the Prayer, Points for Meditation, and Resolution, and change them from time to time to determine which is more effective for you.

Prayer:  LORD Jesus Christ, the good Shepherd of the sheep, who came to seek and to save that which was lost; I beg you to be present today in your power with the sheep for whom You gave Your life.  Show forth Your compassion to the helpless, enlighten the ignorant, protect those in peril, and bring home the wanderers in safety to Your fold.  Feed those who hunger and clothe those who are naked with the food and clothing that You are; who lives and reigns with the Father and the Holy Spirit, one God, world without end.  Amen.

Point for Meditation:  Reflect during this season of Lent on the ways in which you have not been a good sheep.  Ask yourself if you have been wandering from the Good Shepherd; going your own way; spiritually starving yourself; or not following the Good Shepherd in any other way.

Resolution:  I resolve to consider one way in which I have not been following the Good Shepherd and vow to follow Him more faithfully.  I also resolve to find one way to make this more likely to happen, through prayer, writing reminders, re-reading John 10, finding someone to pray with about your wandering, etc.

The Institutions Americans No Longer Believe...
Cranach
Related posts from Give Us This Day

Evangelical
John 10:1-30 – The Good Shepherd Part I
Give Us This Day
TRENDING AT PATHEOS Evangelical