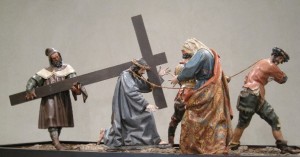 “Come unto Me, all ye that travail and are heavy laden, and I will refresh you.”

Those who are used to the traditional Book of Common Prayer will recognize this verse (Matthew 11:28) as one of the four Comfortable Words that are said by the priest to the congregation after the General Confession of Sin and Absolution.

And so, after hearing the difficult words of Jesus earlier in the chapter and in chapter 10, and bearing my own cross this day, I’m ready for the Comfy Words.

I’m ready to hear, “Come to Me, all you who labor and are heavy laden, and I will give you rest.”  I want to hear more, and so I make the mistake of continuing to read.  And what do I hear?  “Take My yoke upon you and learn from Me.”

I suspect that there’s a cross lurking somewhere around this promised rest.  And there is, so let’s go right for it and embrace it, for there’s no use denying it or avoiding it.  There is a yoke to take upon you, as Jesus says, and that yoke is the cross of Christ.  But what is this cross to me?

It’s an instrument of the punishment for my sins.  It’s the instrument of death by which my Lord and Master and God was crucified and died.  And so it’s a painful reminder to me of my own sins and of the suffering my Savior bore for me.

But there’s something else.  This cruel instrument of death is also the most common and famous symbol of Jesus Christ and Christians.  Why would that be?  There must be more to this cross than simply suffering and death.

And so this cross must also become my cross, for on it I am united to Jesus Christ, both in His death and in His life.  It is my cross as well because on it the old man in me must be crucified and put to death so that the new man may live in me.  On this cross, as my Lord gave Himself up for me, I must now give myself up for Him.  And so I must take up this cross daily, for it’s how I take Him up.

It is a cross, it is a yoke, and it is something to bear.  There are times when I don’t feel like bearing it.  But that’s only because I’ve forgotten the proper way to carry it, and that’s with Him, and not by myself.

It turns out that this yoke is indeed easy, and my burden is light because He is with me carrying it with me, if only I’ll let Him.  Once I allow Him to carry it, my life becomes light again because it turns out that I’m really the source of my own burdens after all.  I’m the reason that life is so heavy, because I interpret my life apart from Him and try to live it without Him. And that is a hard and heavy thing!

When I take up His yoke I find rest because I can finally rest from myself and all my labors.  I am constantly doing things by myself and for myself, and that makes my life heavy.  Even as a Christian I find myself constantly laboring and groaning with toil, mostly because I think that it’s up to me to keep the yoke of the Law.  But when I learn from Him to give myself up to the Father, I find rest for my soul again.

Let me explain it to me this way.  There is, indeed, a weight, a cost, to giving myself up to God.  It’s not that this weight or cost ever goes away in this life.  But when I take on the yoke of Jesus, it becomes light, as His labor for the Father must have been light, even when it was objectively heavy.

It’s like the burden a husband would feel if he were carrying his unconscious wife in his arms as he fled from their burning house.  She might be heavy in his arms, but he would not interpret her as a burden or as heavy.  Why?  Because love makes even the heaviest burden light.

And that’s how we are to feel when we take Jesus Christ and put Him on us, who is our spiritual armor and our new skin.

“Come to Me, all you who labor and are heavy laden, and I will give you rest” Jesus says.  “Take My yoke upon you and learn from Me.”  Give up the yokes you have chosen to place on yourself, and put Jesus Christ on today instead.  No matter what that human yoke is, it’s time to give it up for the yoke of Christ, the yoke of love for which you were created.

Whatever your personal yoke is, take it off today, and take His yoke upon yourself instead.  For His yoke is easy and His burden is light, because He is in them, and He makes them so.

Prayer:  Father, I come to You today, accepting Your love that sent Your only-begotten Son into the world that I might not perish but have everlasting life.  I take on myself today Your Son, Jesus Christ, who is the propitiation of my sins and my advocate before You each day.  I come to You today, Father, through Jesus Christ, seeking the rest that only He can give me.  Amen.

What human yokes are you bearing today?  What might you do to come to Jesus and replace that yoke with the one He wants to give you?

Resolution:  I resolve to find one way to take off all my other yokes today and to put on Jesus Christ instead. 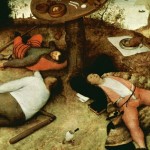 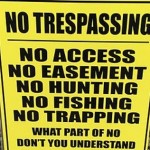 October 6, 2016 Matthew 12:1-13 - What is the Sabbath good for?
Recent Comments
0 | Leave a Comment
Browse Our Archives
get the latest updates from
Give Us This Day
and the Patheos
Evangelical
Channel
POPULAR AT PATHEOS Evangelical
1

On Not Throwing the Baby Out...
Roger E. Olson
Related posts from Give Us This Day

Evangelical
Are You Really the Disciple Jesus Loved?
Give Us This Day
TRENDING AT PATHEOS Evangelical