Monday of the Sunday after the Ascension – Revelation 5

Monday of the Sunday after the Ascension – Revelation 5 May 17, 2015 Fr. Charles Erlandson 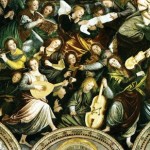 I wish I knew more songs.  Actually, I probably know a few thousand (and probably 200 or so just from the Beatles), and at home, I’m always seizing a shard from some song I know and mutating the words weirdly to fit something one of the kids has said.  They say to me, “You have a song for everything!”  To which I reply, in song, “To everything (turn, turn, turn) Daddy has a song (turn, turn, turn).”

But I can’t always find the right songs to sing in response to God’s mighty works in my life.  And that’s the pattern throughout the Holy Scriptures: when God has done something marvelous in our sight, we break forth in joyful song.  When God delivered His people from the land of slavery and promised them the Promised Land, Moses sang his song and Miriam sang her song (Exodus 15.)

The highest concentration of songs in the Bible, outside of the Psalms themselves, occurs when Jesus Christ is born, because where Jesus is, there is joy, and we should rejoice with an exceedingly great joy.  Mary sings her Magnificat, Zacharias sings his “Benedictus,” and Simeon sings his “Nunc dimittis,” all of which have been preserved as “canticles” or songs in the Daily Office of the Book of Common Prayer.  We sometimes forget that even the angels themselves sang when Christ was born, and they sang the “Gloria,” which we sing in the Holy Communion service.

So what is it that Jesus Christ has done that provokes such joyful song in heaven and on earth in Revelation 5?  In one sense, Jesus Christ is just being Himself, and that alone is enough to provoke worship and song.  If Jesus Christ did nothing but be the great I AM, dwelling in His blinding glory, that would be reason enough to worship Him in song.  This is the Marian reason for praising Him: to sing to Him simply because of Who He Is.  In Revelation, we see a lot of who Jesus is.  But the Marthan reason for praising Him in song is because of what He has done.  “O sing to the LORD a new song; for he hath done marvelous things: His right hand, and his holy arm, hath gotten him the victory (Psalm 98:1).  “Blessed is the Lord God of Israel, for He has visited and redeemed His people” (Luke 1:68).

Now I suppose that if all these reasons to worship the Lamb were in the future, I would still have great reason to praise Him.  But it would be a little anticlimactic, don’t ya think?  After reading the whole Old Testament and seeing the creation and God’s chosen people still subject to futility; after witnessing the birth of Jesus Christ, and His Baptism and miracles and teaching; after seeing Him die on the Cross for our sins and crushing the skull of the Serpent; after seeing God the Father raise Him from the dead; after seeing Him ascend to rule at the right hand of the Father; after seeing the Holy Spirit of Christ poured out into the Body of Christ; after witnessing the Acts of the Apostles and the miraculous spread of the Gospel; after reading all of the letters of the New Testament and hearing of Christ’s victory; after all of this, to come to the book of Revelation, the big climax of the Holy Scriptures, only to be told that we would have to wait for all of these marvelous things to really take effect – wouldn’t that be just a little anticlimactic?

And yet that’s the way many of us read the Bible, and that’s the way many of us experience God in our lives.  One of the reasons I’m so adamant about the fact that Revelation (and other New Testament passages) are primarily about what Jesus Christ has already done is that when we place it all in the future, God becomes weak and remote in our lives.  I believe that to the degree that you see that Jesus Christ is on the throne ruling now, and we with Him, to that degree our hearts will be filled with praise and thanksgiving and songs.

If, however, you either don’t believe or don’t live as if He is reigning in your life and over heaven and earth, then you will be like the Israelites in Psalm 137.  How can you sing the songs of Christ and the heavenly Jerusalem, the Church, when we are in exile and Christ hasn’t begun to reign yet and the world is going to Hell in a hand basket and I’m not feeling so well myself?

So I believe that in Revelation 5 the scroll with the 7 seals that Jesus Christ is opening is the New Covenant, the New Testament, the cataclysmic death of the Old Covenant and the glorious and joyful birth of the New Covenant or Testament.  To the Asian churches of the first century, a biblion with 7 seals would have meant a testament.  When the testator dies the testament would have been brought forward and, when possible, opened in the presence of 7 witnesses.  This is also the meaning of the writer of Hebrews when he writes the following: “For where there is a testament, there must also of necessity be the death of the testator. For a testament is in force after men are dead, since it has no power at all while the testator lives.”

But when the Lamb was slain and brought back to life, the Old Covenant, with its condemnation for our sins, was put to death, and the New Covenant, which has a superior Temple, Priest, and Sacrifice, was born.  For this reason, we are to sing!  We should learn the songs of the book of Revelation, for they are our songs, even now.  We should take time every day to sing hymns to God for Who He Is and for what He has done.

But the greatest music is when the saints of God, His priests and kings, obey His will and live in harmony with His heavenly voice.  The greatest music is not just when saints on earth in concert sing but when saints on earth in concert act, living in the love of God, and the grace of the Lord Jesus Christ, and in the fellowship of the Holy Spirit.

Most of us readily accept that we are priests of God.  How?  By offering up sacrifices of praise and thanksgiving, which is our worship, and by offering up our prayers, which is the incense, the sweet-smelling aroma that is pleasing in the nostrils of the Lord.

So why don’t we also accept that we are kings?  I think it’s because we don’t really believe that Jesus Christ is ruling.  But He is!  And if He is King, we are made kings with Him.  If we’re kings, in what sense are we ruling?  We rule with Christ whenever we allow Him to rule in our lives.  Remember that God’s kingdom is a strange kingdom to us, who have grown up in a kingdom of darkness and wickedness.  The royal road to ruling in God’s kingdom is to bow the knee before the Father and humbly do His will.  If you humble yourself before God, He will exalt you, and exalt you above what you could ever dare imagine, for He will exalt you to be with Him in heaven, even now.

When we pray the Lord’s Prayer, therefore, one of the ways we should pray it is with an eye to the Ascension of Jesus Christ and our ascension with Him.  We pray to our Father who is in heaven, but the Son is also in heaven, and we are united to Him.  We pray that we would hallow God’s name, and we do, every time we do His will here on earth as it is done in heaven.  And when we humble ourselves before Him and do His will and not our own, we are transformed into the likeness of the Son, and the kingdom of heaven comes, and we reign with Christ, because we have humbled ourselves with Him.

Prayer:  Worthy is the Lamb who was slain

To receive power and riches and wisdom,

And strength and honor and glory and blessing!

Blessing and honor and glory and power

Be to Him who sits on the throne,

And to the Lamb, forever and ever!”

Resolution:  I resolve to sing with joy and gusto before the Lord today because of Who He Is and what He has done.

May 18, 2015 Tuesday of the Sunday after the Ascension - Revelation 11:15-19
Recent Comments
0 | Leave a Comment
Browse Our Archives
get the latest from
Give Us This Day
Sign up for our newsletter
POPULAR AT PATHEOS Evangelical
1

Ravi Zacharias: I didn’t want it...
Unbelievable?
Related posts from Give Us This Day

Evangelical
Luke 11:37-54 - The Inner Man
Give Us This Day
TRENDING AT PATHEOS Evangelical