The Moon has Already Turned to Blood

The Moon has Already Turned to Blood May 8, 2016 Fr. Charles Erlandson

“I will show wonders in heaven above

and signs in the earth beneath:

blood and fire and vapor of smoke.

The sun shall be turned into darkness,

and the moon to blood,

And on the Monday after Ascension Sunday in the year of our Lord two thousand and eight, the Lord spoke to my spirit and began to show me the wonders He had in store for me and for all who believed on Him.

“Tell me the meaning of these holy words,” I said.

And this is what I heard:

“These are the words of the Lord that He spoke to St. Peter, after He had filled His holy apostles with His Holy Spirit and breathed life into the Body of His Son.  The Day of Pentecost, as St. Peter has said, was the fulfillment of these terrible words.  The Lord has now poured out His Spirit on all flesh, your sons and daughters have prophesied.

I have poured out my Spirit in those last days.

I have shown my wonders in heaven above and signs in the earth beneath.

I have turned the sun into darkness and the moon into blood, for the words of the Lord have were fulfilled on that great Day of Pentecost, as the holy prophet and apostle Peter truly spoke.

And though the Lord has spoken in the days of Joel and again in the days of Peter and the apostles, He speaks still, saying that He will show wonders in heaven above and in the earth beneath.”

And I listened, and there was silence for a time, and then I heard the following words:

“Hear these words: Jesus of Nazareth, a man attested by God to you by miracles, wonders, and signs which God did through Him in your midst, as you yourselves know – Him, being delivered by the determined purpose and foreknowledge of God, you have taken by lawless hands, have crucified, and put to death.”

And before I could utter another word, I saw before me the earliest days of my youth and the many disputes with my brothers that I had long forgotten.  I felt the many times that I had complained about the things the Lord had given me.  I remembered the occasions on which I determined to go my own way and do my own will, and I rehearsed the days in which I feared and did not trust Him.  Even the terrible days when I told myself life wasn’t worth living, in spite of the Lord’s generosity to me were made known.

And I asked that my sins be taken away, for they were too great.  And they were removed from me.

And there was silence for a time again.

And then I saw that I, indeed, had delivered my Lord over by my sins.  By my hands and by my tongue and by my heart I had crucified my Lord, and I had put Him to death.

And then I heard these words: “whom God raised up, having loosed the pains of death, because it was not possible that He should be held by it.  His soul was not left in Hades, nor did His flesh see corruption.  This Jesus God has raised up, of which you are all witnesses.  Therefore, being exalted to the right hand of God, and having received from the Father the promise of the Holy Spirit, He poured out this which you now see and hear.”

I saw that this Jesus whom I had crucified had been made both Lord and Christ by God.

And behold, I saw wonders in heaven above and in the earth beneath: the ones who had crucified him, you and me, had their sins forgiven by His Blood.  To those who had repented of their sins and offered their lives to Him, He gave the power to be the sons of God and new creatures.  I saw myself dressed in a white robe and my sins having been washed away.  And I saw myself seated in the heavenly places in the presence of my Lord.

And the Lord poured out His Spirit upon me that I should be blessed to see such things.  And therefore, I prophesied what the Lord had shown me.

And there was silence for a time.

Prayer:  Father of light, from whom every good gift comes, send Your Spirit into our lives with the power of a mighty wind, and by the flame of Your wisdom open the horizons of our minds.  Loosen our tongues to sing Your praise in words beyond the power of speech, for without Your Spirit man could never raise his voice in words of peace or announce the truth that Jesus is Lord, who lives with You and the Holy Spirit, one God, for ever and ever. Amen.

What response did you have through hearing again the Good News of Jesus Christ?  What else is the Lord saying to you today?

Resolution:  I resolve to listen to what the Spirit is telling me today, and when I hear to obey all that He has told me to do. 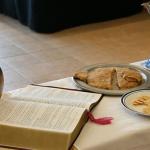 May 9, 2016 The 4 Things the Early Church Devoted Themselves to
Recent Comments
0 | Leave a Comment
Browse Our Archives
get the latest from
Give Us This Day
Sign up for our newsletter
POPULAR AT PATHEOS Evangelical
1