How patient are you?  How long do you think it’s reasonable to wait for something to happen that’s supposed to happen?

In our contemporary world, we’re used to having things happen immediately, or certainly the same day.  If certain people e-mail you and you don’t get back to them within the day, you’re late.  With others, if not within the hour you’re late.  It kinda bothers me to see people ignoring the people next to them and shoving them aside, all to text someone God has not even put them with at the moment.  A physician recently told me that he’d had several patients tell him to wait, so that they could take their “important” call (he’s an ER doctor).

Some psychologists believe that our need for immediate gratification and resolution to all things is a primary cause of the road rage which is growing.  We’re used to everything happening quickly, at the speed of electrons, and so when we’re stuck in traffic and there are no magic weapons to pull out, no alternative avenues of doing our will, and nowhere to go, we get mad.

We expect problems that have been years in the making to be magically solved in a matter of weeks or, if we’re patient, months.

And then there’s God’s time.  It’s a good thing He put it into the Bible that a day is as 1000 years to Him because even if that verse is misused a lot, it gives us at least a little insight into the mind and life of God.  There are certain people in life who are governed by a different schedule than the rest of us, to the point that we even invent names for such a time zone, named after the person who is perpetually late.

If prayer teaches us nothing else, it teaches us that God is most definitely not in our time zone.  There are times when we seem like the rats in the maze and when we faithfully pray God gives us what we’ve prayed for almost immediately.  It’s kind of freaky when it happens, but it does.  Other times, it seems as if our prayers are steering the continents as they drift and that only after eons do we hear a response, if ever.

There are many, many promises that God made to the Israelites, beginning with Abram.  He made more to the Israelites during the time of Moses, and then again to David.  His earliest promise was made to Eve, that though the Serpent would bite her heel, her heel would crush his head.

To the Jews in Antioch Pisidia, however, Paul could joyfully and confidently proclaim that God’s promises to His people were now fulfilled.  Paul spoke most about the promises made to David but also throws in some renewed promises as they were proclaimed by Isaiah and Habakkuk.

All that the Jews had been promised and had been waiting for, and all that the Gentiles could see and desire only dimly, was now fulfilled in Jesus Christ, the one the Jews had put to death.  The Jews put Him to death, but God raised Him up.  That promise which was made to the Jewish forefathers was now fulfilled in their children, a promise which God fulfilled by raising up Jesus (verse 33).  Through this Man everyone who believes is justified.

When I turn to apply this passage and this wonderful truth to my own life, the first thing I’m struck by is how blessed is the state I find myself in.  The lines have fallen to me in pleasant places!  For me, the most important promises of God have been fulfilled.  God has already sent His Son to redeem the world.  We have already received the Promised Land, which is God Himself (and Heaven), and we have been led out of captivity.  The sacrifices can stop now because the one perfect and sufficient Sacrifice has already been made.

But having been blessed by God’s fulfillment of His promises through His Son, and having witnessed how Israel had to wait hundreds and even thousands of years for God to fulfill His promises to her, I feel a mighty rush of feelings sweeping over me.

In light of how powerfully and faithfully He has fulfilled His promises through Jesus Christ, I am ashamed at how little I trust God to fulfill His promises to me.

In light of how long Israel had to wait, I’m humbled by how impatient I often am.

Seeing how God faithfully fulfilled His promises to God, I am encouraged and my faith is strengthened.

Seeing how powerfully God worked in Israel and in Christ, I am peaceful and awestruck.

Knowing how faithful God has been to me, I am thankful to Him and desire to be more faithful to Him.

And knowing the certainty of the greatest promise of all – life for eternity in God’s presence in Heaven – I am filled with praise, joy, and thanksgiving.  And that’s always a good place to end any encounter with God.

Prayer:  Great and marvelous are Your works,

Just and true are Your ways,

O King of the saints!

Who shall not fear You, O Lord, and glorify Your name?

For You alone are holy.

For all nations shall come and worship before You,

For Your judgments have been manifested.

1.  What promise or promises of God do you most need to hear and remember today?

2.  What promises and fulfilled promises of God can you remember that will lead you to patience, peace, joy, thanksgiving, or praise?

Resolution:  I resolve to meditate more fully on one of God’s promises, that I might respond to Him more faithfully as He directs me. 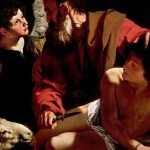 Evangelical
Mark 12:38-44 - How much should I give...
Give Us This Day
TRENDING AT PATHEOS Evangelical

Franklin Graham and Evangelicals Aren’t the Ones Obsessed...
Progressives keep promising conservative evangelicals they’ll be our friends if only we...
view all Evangelical blogs
What Are Your Thoughts?leave a comment
Copyright 2008-2020, Patheos. All rights reserved.